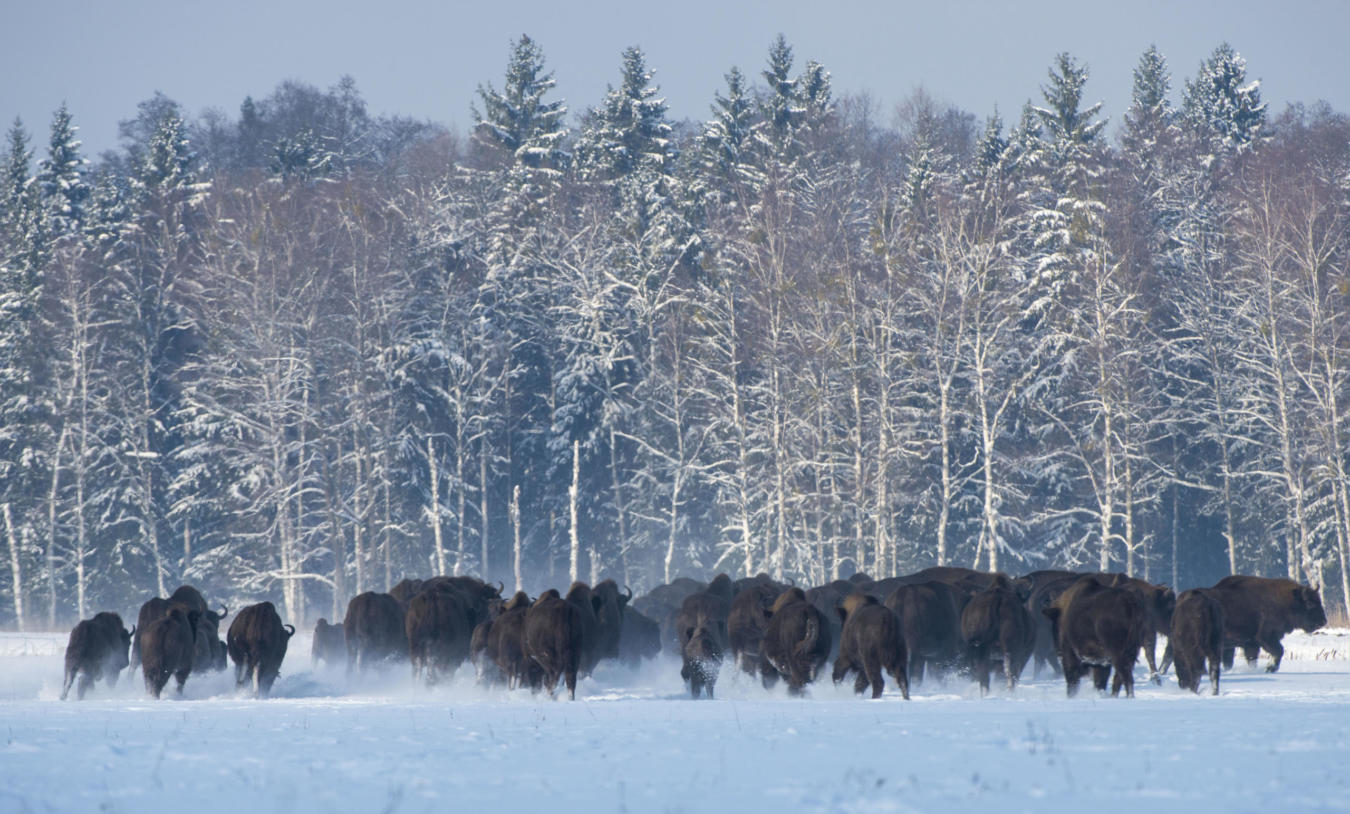 After centuries of absence from the Fagaras Mountains in Romania, European bison have finally returned. Less than a year after a herd of eight were released to roam free, FZS partner organization Foundation Conservation Carpathia (FCC), who were involved, and local communities have received a wonderful gift. At the end of last month, the first bison calf to be born in the wild in the Fagaras in 200 years was spotted.

The bison herd, released in March, arrived in the Romanian part of the Carpathian mountain range from Germany and the Polish Carpathians in autumn last year. After careful preparation, this is the first bison release of a reintroduction program led by the FCC. The program’s feasibility study showed that 100 bison should be introduced for such a vulnerable species to settle and survive. FCC plans to gradually reintroduce about 30 individuals each at three sites in the Fagaras Mountains between which movement and migration is possible, allowing for interbreeding between sub-populations over time.

Through careful planning and a strict phased reintroduction protocol, the FCC team ensured that the first release was carried out in the most responsible way possible. The chosen sites are at least 20 kilometers from local communities and have been identified according to bison habitat and resource requirements. During the first weeks after their arrival, the bison were constantly monitored in a special quarantine enclosure.

They were then released into a larger acclimatization enclosure, giving them more space to properly adapt to their new environment. The area of this enclosure was carefully selected to represent the habitats the herd now roams in the wild. In the enclosure, the bison were regularly visited by bears and wolves and also learned to deal with the steepness of the terrain.

“Once in the wild, the bison seemed to really explore the area systematically and of course they disabused us of our predictions of where they would go – they knew better and found all the little meadows and abandoned clear-cuts that provided them with plenty of food”, says Barbara Promberger, Executive Director of the FCC. The herd has roamed over 10,000 hectares in the past six months and appears to have adapted very well. As a result, they are entering the colder months in good condition, having gained a lot of weight in the summer.

The successful calving has reassured the team that their careful efforts to ensure a smooth reintroduction are paying off. The arrival of the first calf is later than usual, but not unheard of – especially in captive-bred bison. The coming months will be crucial, as Barbara explains, “winters can be really harsh here in the mountains and it will be their first one out on their own, and now also with a late-born calf, so this is going to be a critical period”.

The team will be carefully watching the bison over the coming months. The leading female has been fitted with a satellite-tracking collar, so that the reintroduced herd can be located on a daily basis. Camera traps have also been deployed in the area, and a dedicated bison monitoring team makes visual contact with the herd at least once a week to check their physical condition.

Bison have long been an important symbol in Romania, prevalent in national history and folklore. The opportunity to see free-roaming bison is a fantastic ecotourism drawcard, bringing the potential for much needed sustainable development opportunities for rural communities. As such, local people have keenly awaited their return and the arrival of the first calf has caused much excitement in the region.

More about the project

The bison reintroduction program is carried out by the Foundation Conservation Carpathia with funding from the European Commission, through the LIFE program, and co-funding from the Endangered Landscapes Programme. Since 2009 the FCC has been working with local and international partners, including FZS, to secure the remaining wilderness in the Romanian part of the Carpathian Mountains. The Foundation aims to restore and protect a reserve that is large enough to support a significant population of large mammals ¬and to allow ecological and evolutionary processes to occur as they should.

The creation of the FCC came at a critical time for Romania’s forests after the decision was taken in 2005 to pass formerly nationalized forests, including conservation areas, back to private individual ownership. This process triggered usage conflicts, and in many cases, massive clear-cuts with thousands of hectares of forests illegally logged. The integrity of the Carpathian ecosystem was severely threatened. However, most of the former owners have no interest in the land and are generally willing to sell. This has given rise to a highly favorable, yet very narrow, time window in which large natural forest areas can be protected on a permanent basis. The FCC is working to purchase this land in order to create a reserve of 100,000 hectares, and are also monitoring the region’s rangers and investing in the restoration of clear-cut forests where soil erosion poses a risk to the landscape.