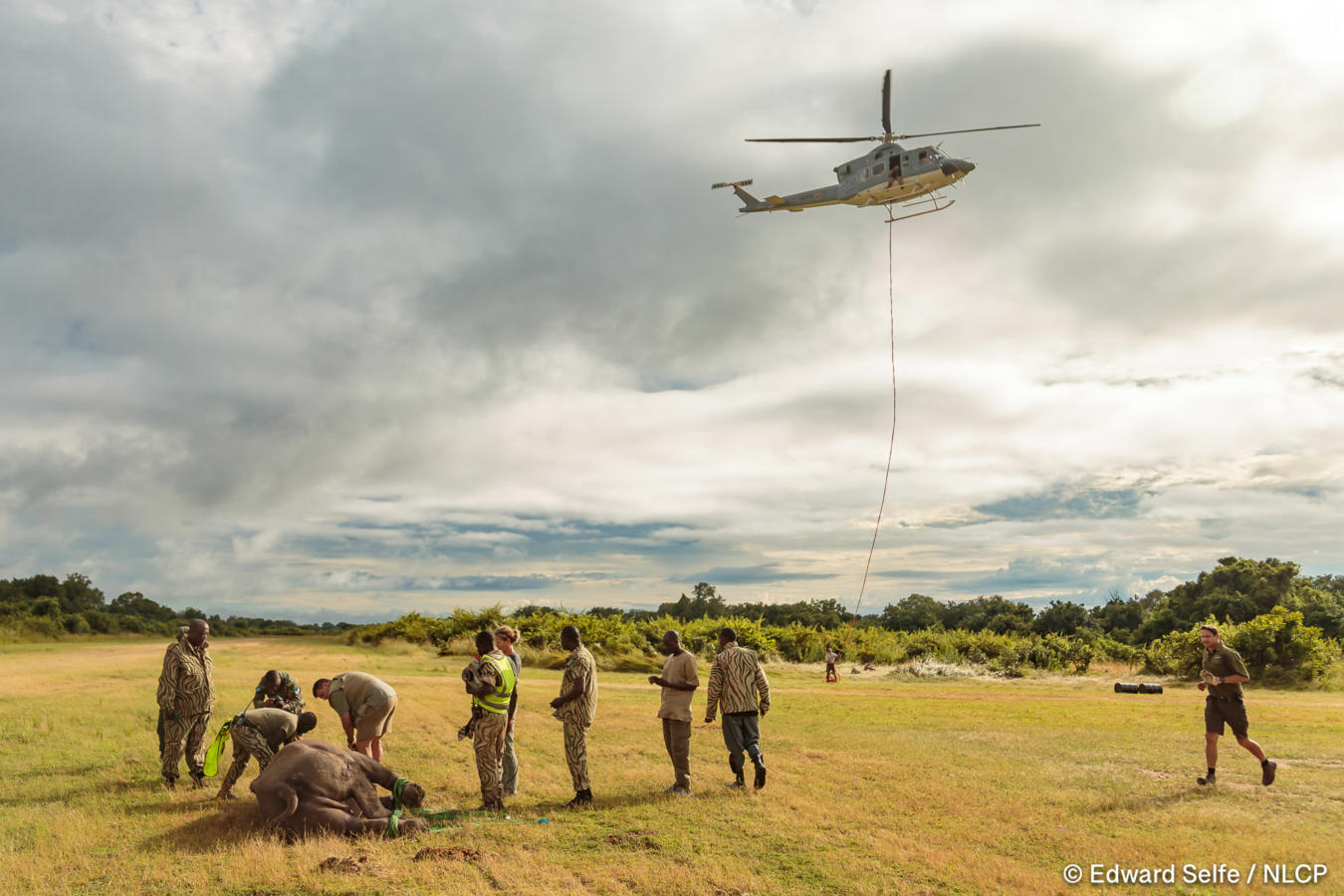 The FZS team in North Luangwa National Park, Zambia, successfully pulled off a complicated rhino rescue. The animal is now roaming safer areas of the National Park thanks to a helicopter and the help of dedicated partners.

Zambia was historically home to the third-largest black rhino population on the continent but the animals were poached throughout the 1980s and declared nationally extinct in 1998.

In 2001, the North Luangwa Conservation Programme (NLCP) – a 36-year partnership between the Department of National Parks and Wildlife (DNPW) North Luangwa Area Management Unit and the Frankfurt Zoological Society (FZS) – embarked on an ambitious project to re-introduce black rhinos to Zambia, and the first animals arrived in 2003. The project has been successful, the population has grown, and is now classified as an IUCN Key 2 population.

However, a successful breeding population is not without its challenges and rhinos are under severe threat because of the illegal trading of their horns, and they are a target species for poaching gangs and criminal cartels.

In 2014 NLCP established the Rhino & Elephant Protection Unit (REPU) – a team of highly trained male and female wildlife officers, whose function is to secure the northern Luangwa ecosystem. While REPU does its very best to safeguard the black rhinos of North Luangwa National Park (NLNP), there have been several break-outs by sub-adult animals (mostly males), who have been pushed away by dominant males. To date, escapees have been tracked, secured and if necessary recaptured and transported back to NLNP.

In 2021, one young black rhino broke out, but instead of going a retrievable distance, this male settled approximately 220km away, in a very remote area of the Luangwa valley with no road access, and a long way outside REPU’s operational area.

To secure the walkabout male, REPU mounted a security campaign unlike ever before, in cooperation with the DNPW South Luangwa Area Management Unit. With surveillance support from the Conservation South Luangwa/Zambia Carnivore Programme aircraft, the rhino was safely protected in a high-risk area while resources could be mobilized and a team assembled to attempt a recapture and rescue.

With almost no road access into the area, and the oncoming rainy season hampering mobility across the valley, getting in and out of the area to exchange security and protection teams was an arduous task and drove home the harsh reality that a road rescue was out of the question.

NLCP looked outwards for support and advice as, in Namibia and South Africa, conservationists have pioneered ‘slinging’ rhino from large helicopters; but this has never been attempted in Zambia and no one anywhere has tried it over such a long distance. It was, however, the only option on the table as the rhino would be very vulnerable to poaching if he remained where he was. Over the next few months, NLCP gathered advice, equipment, and expertise from a multi-disciplinary team to rescue the rhino. On April 8th, 2022, this team – DNPW, Zambia Airforce (ZAF), FZS, CSL/ZCP, Ultimate Heli, Parsons Aviation, and Dr Markus Hofmeyr from the Oak Foundation / Rhino Recovery Fund – embarked on this unprecedented rescue mission. 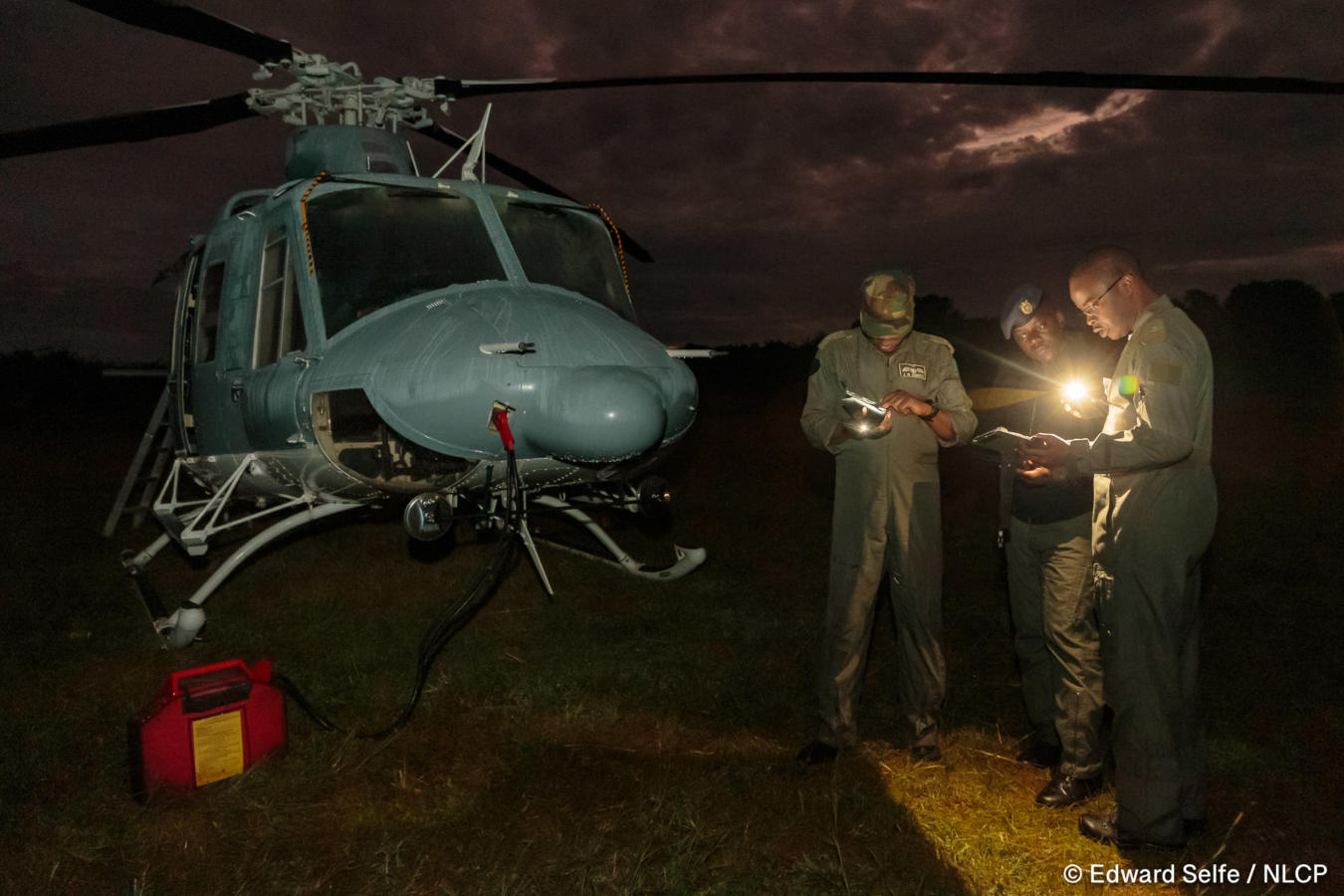 Following the expert facilitation of Niner Juliet Logistics, the rescue team met for a field briefing and a restless but comfortable night generously hosted by the Bush Camp Company in Mfuwe. Before dawn the next day, under the watchful gaze of a pack of nearby wild dogs, the team gathered to prepare for the day ahead, and with spirits high, the fleet took off.

Once immobilized, the vets landed to stabilize the rhino while the Bell 412 chopper piloted by ZAF Lt Colonel Johnson Sakuya and Major Kabwe Mwenya accompanied by Ultimate Heli slinging experts Philip van Coller and Buzz Bezuidenhout were directed in to attach the sling and begin the lift back to NLNP. 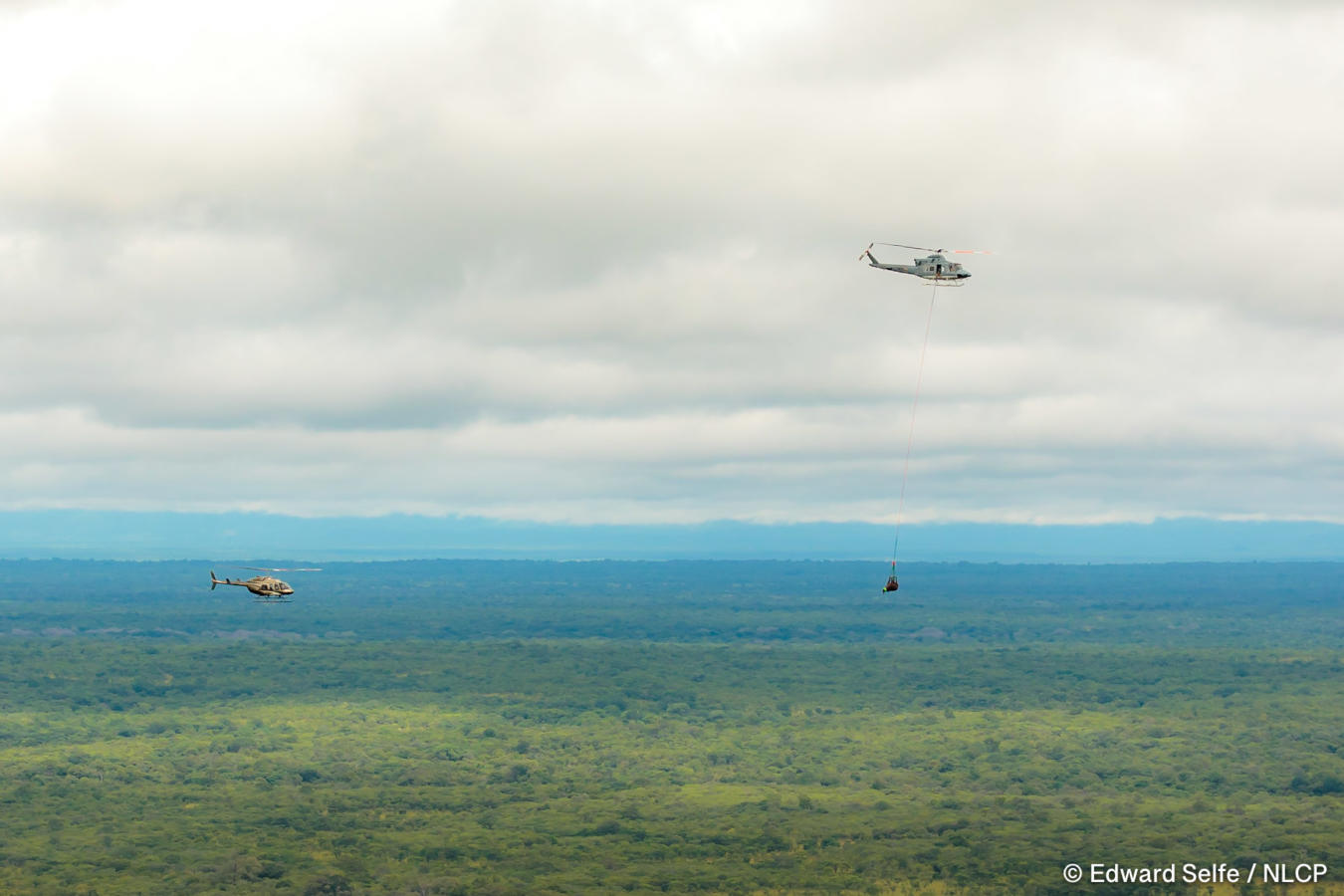 With the rhino safely airborne, the vets flew ahead to the next refueling and vet check stop, whilst the FZS-NLCP Husky stayed close to the slinging chopper to coordinate operations. The airlift went exceptionally smoothly.

Two additional stops en route to NLNP were made to refuel and complete vet checks on the rhino, keep the sedation topped up and release the slinging pressure to allow circulation to the rhino’s legs. At the second refueling stop, they were met by Chief Nabwalya, who helped the vet team with their work before they started on their final leg to NLNP.

Finally, after just four hours (a road trip would have taken at least 36 hours) the rhino arrived back in NLNP where he was, for the third time, carefully lowered to the ground for an expectant crew, led by DNPW Area Warden Pumulo Nyambe, to receive him and to move him into the holding bomas. 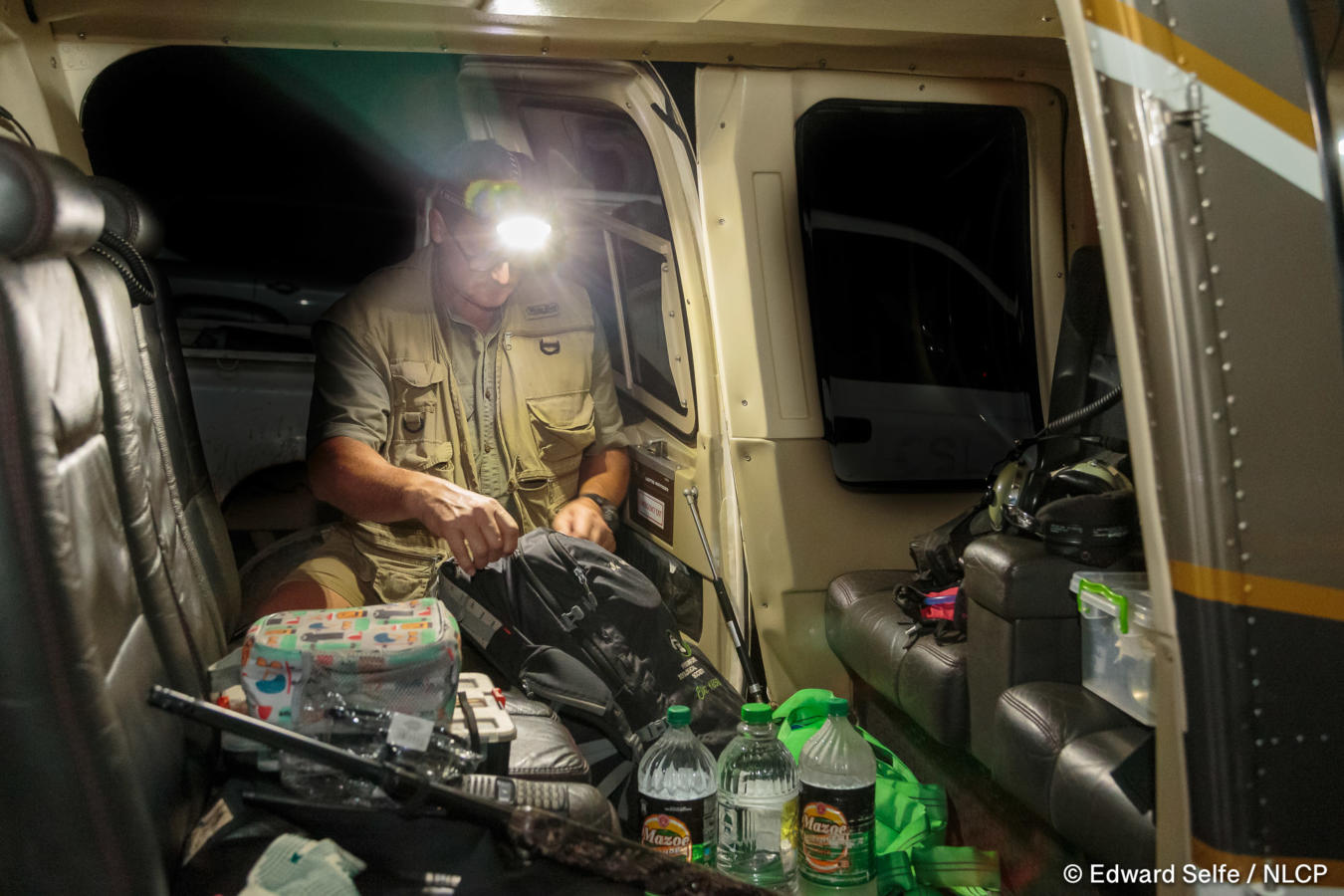 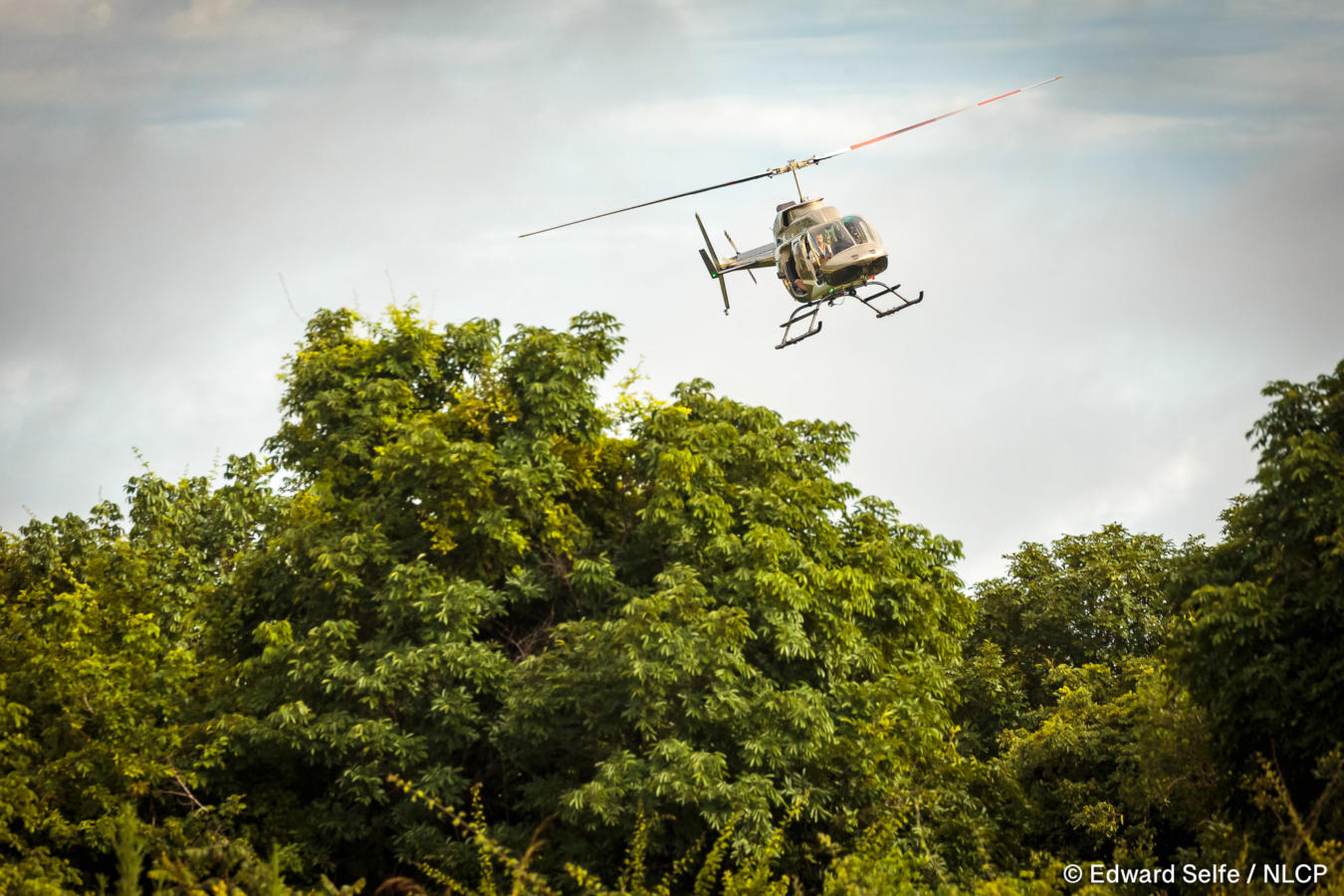 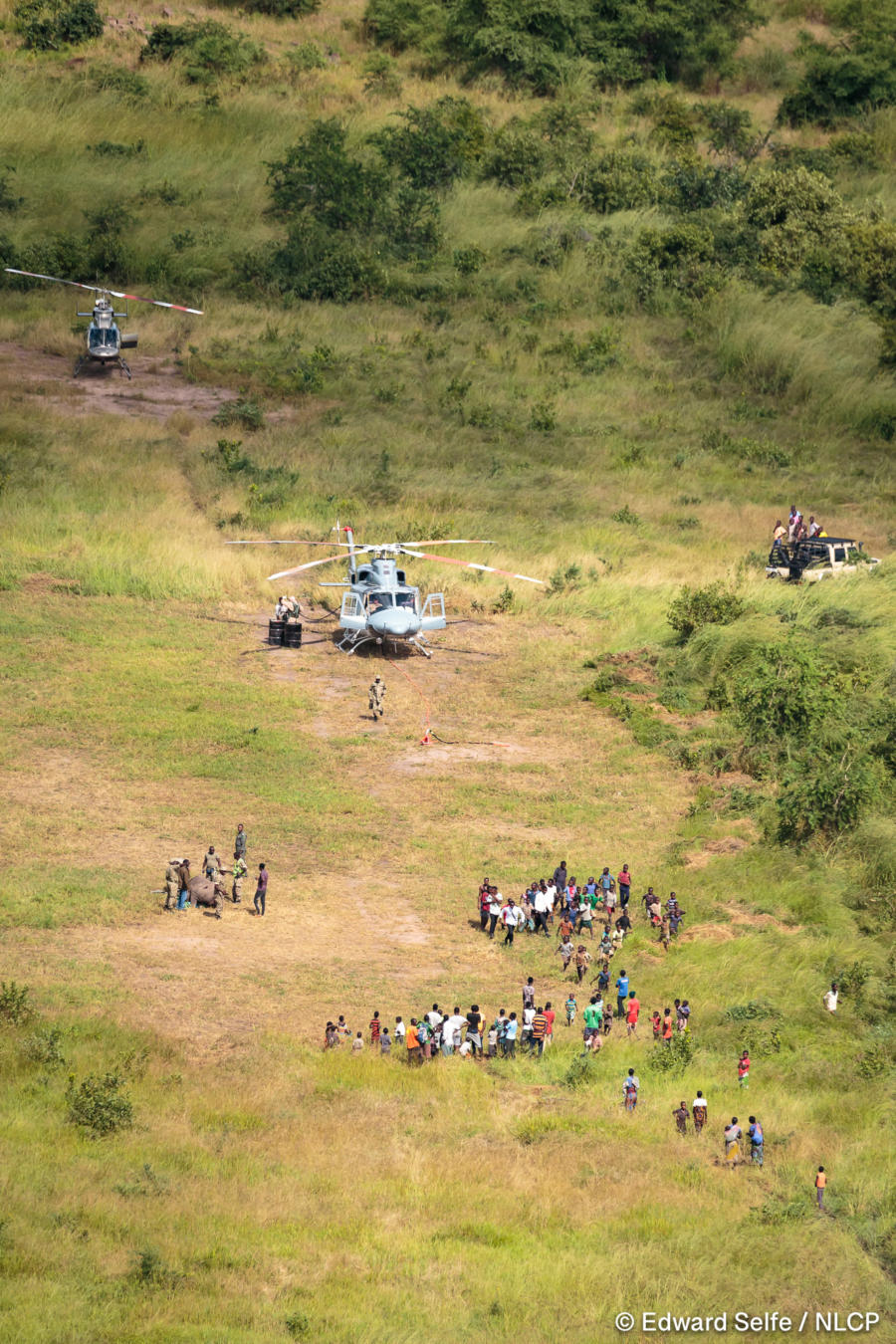 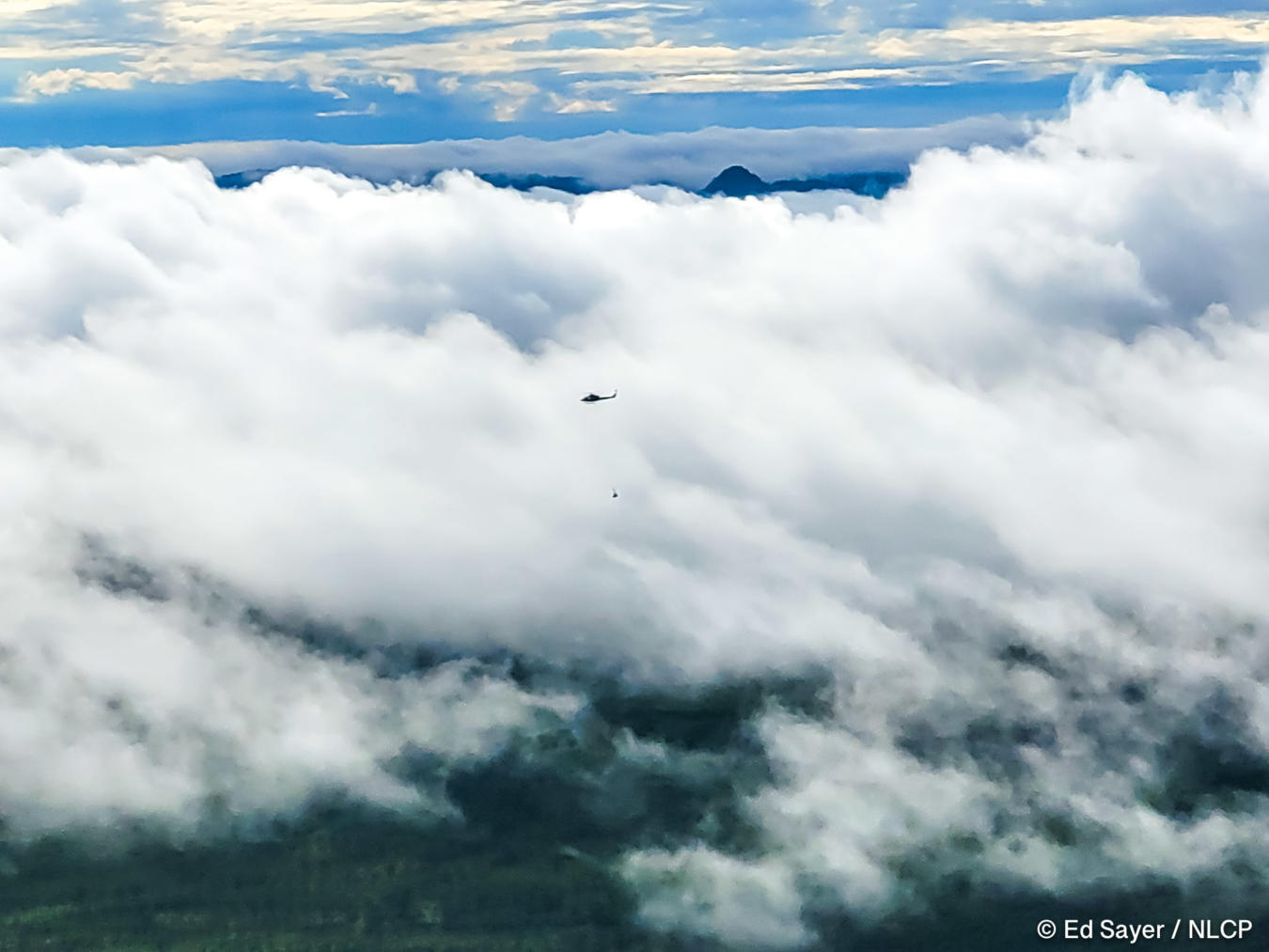 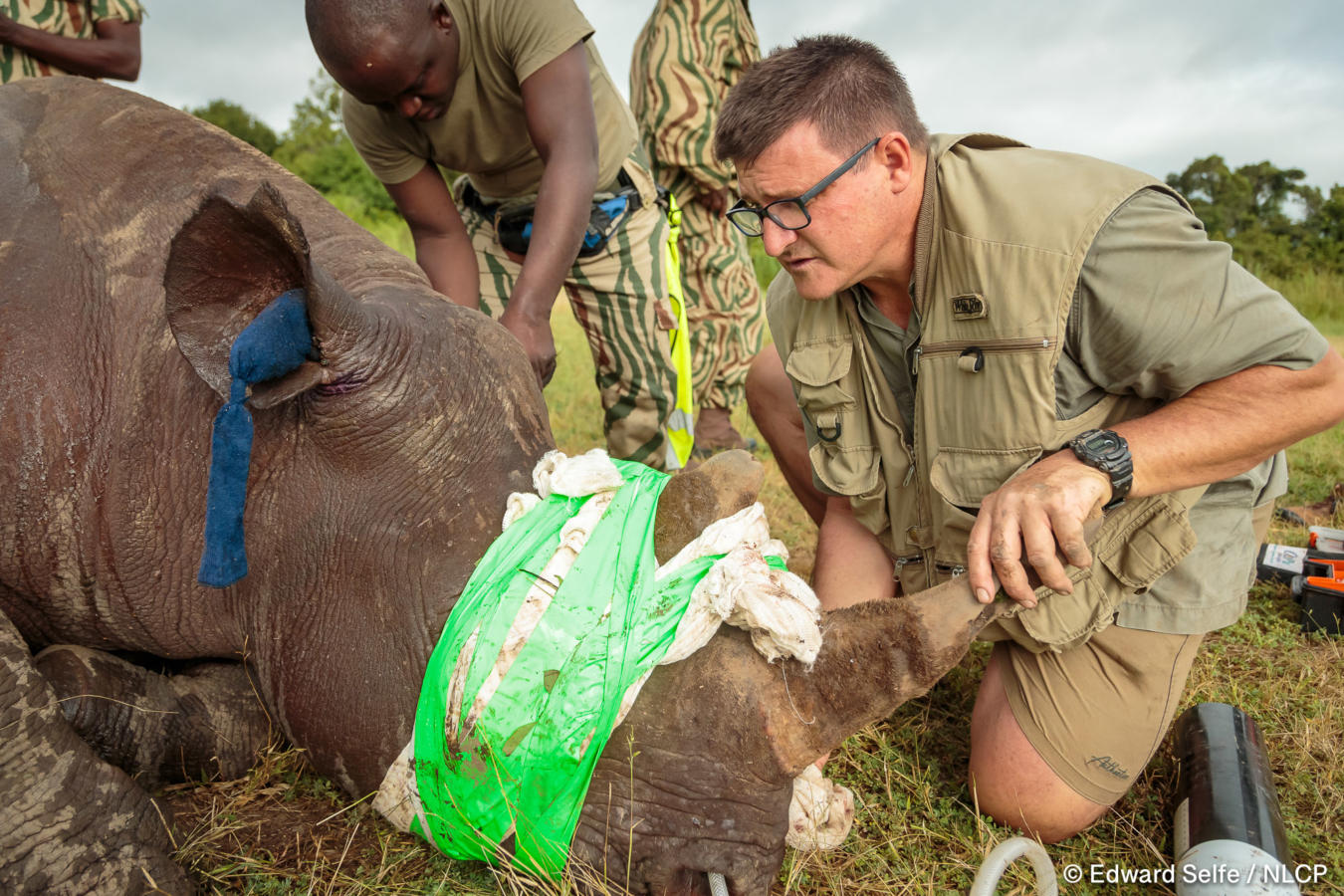 To avoid stress during the operation, the rhino is sedated. 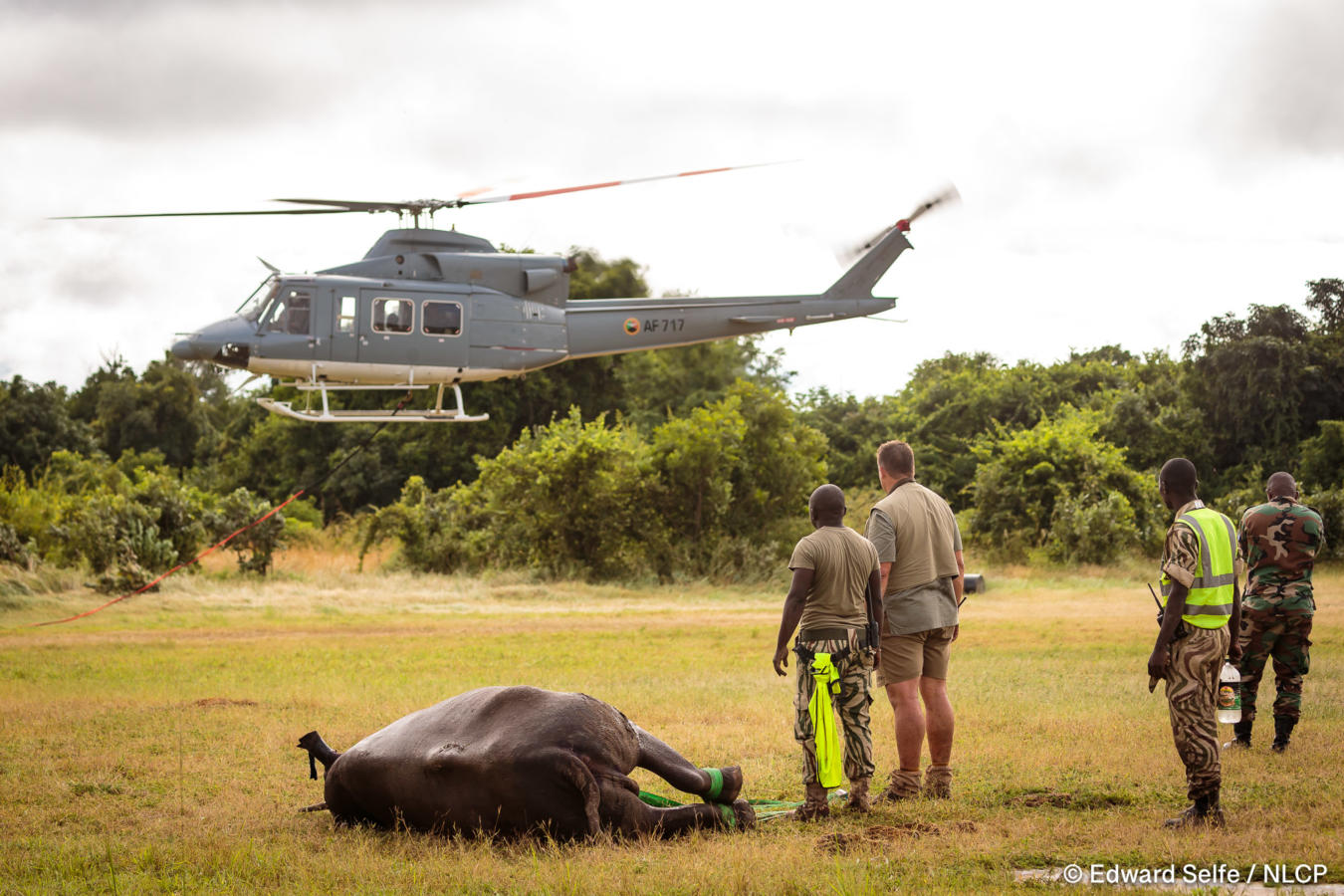 Because of the rugged terrain, the rhino was picked up by a large helicopter. 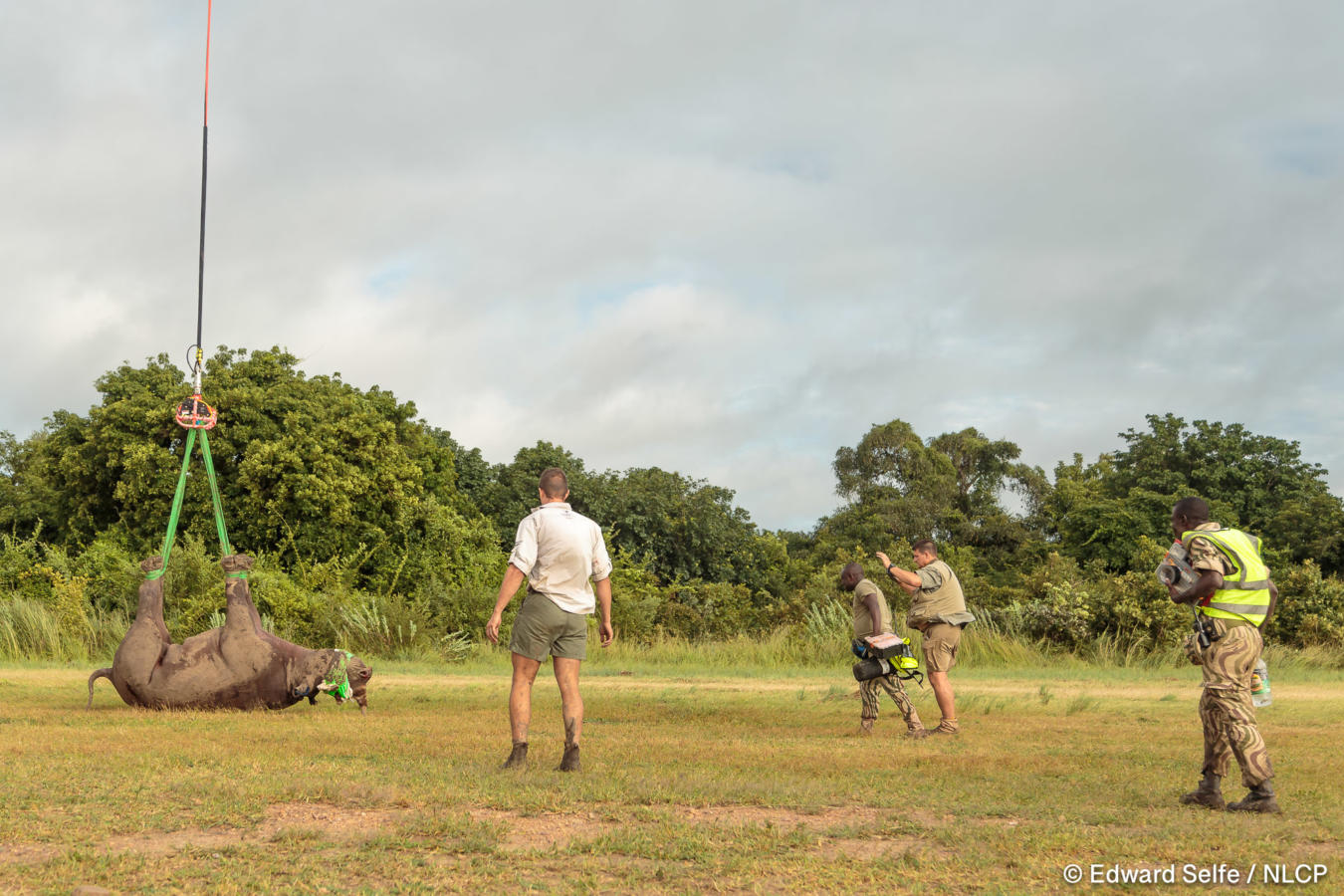 The flight minimized transport time to 4 hours (instead of at least 36 by truck). 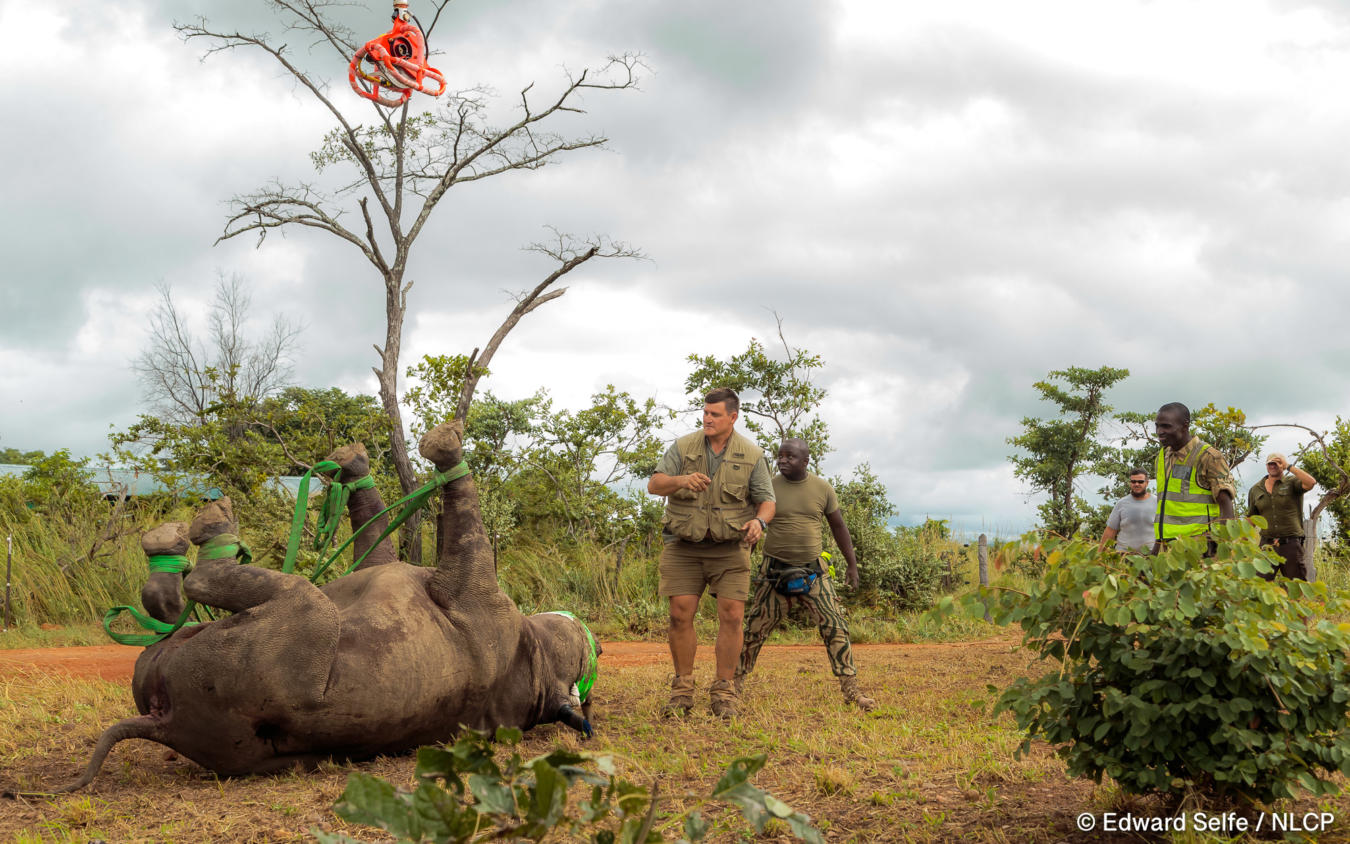 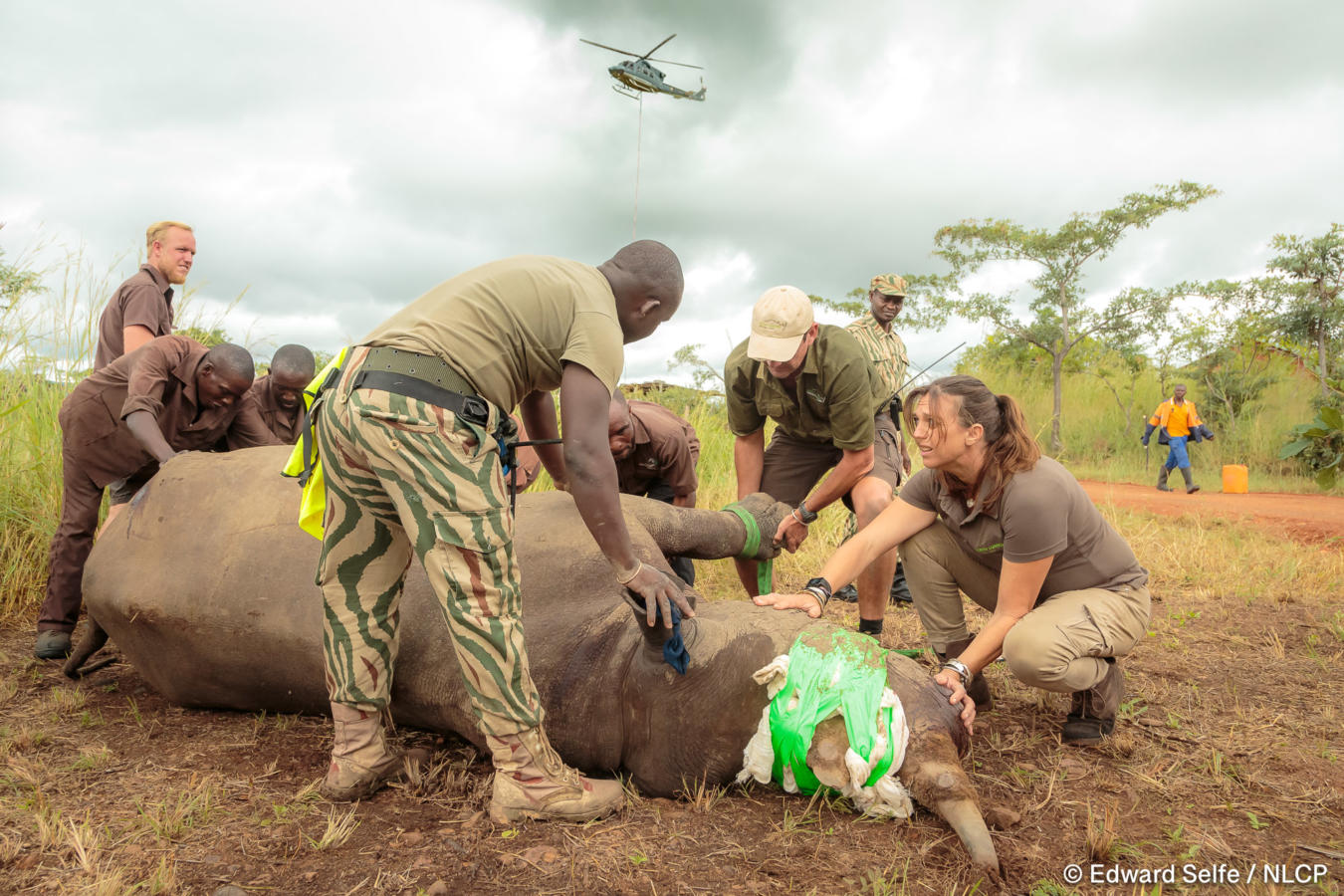 Monitoring and checking the rhino's health during the operation is the top priority for the team. 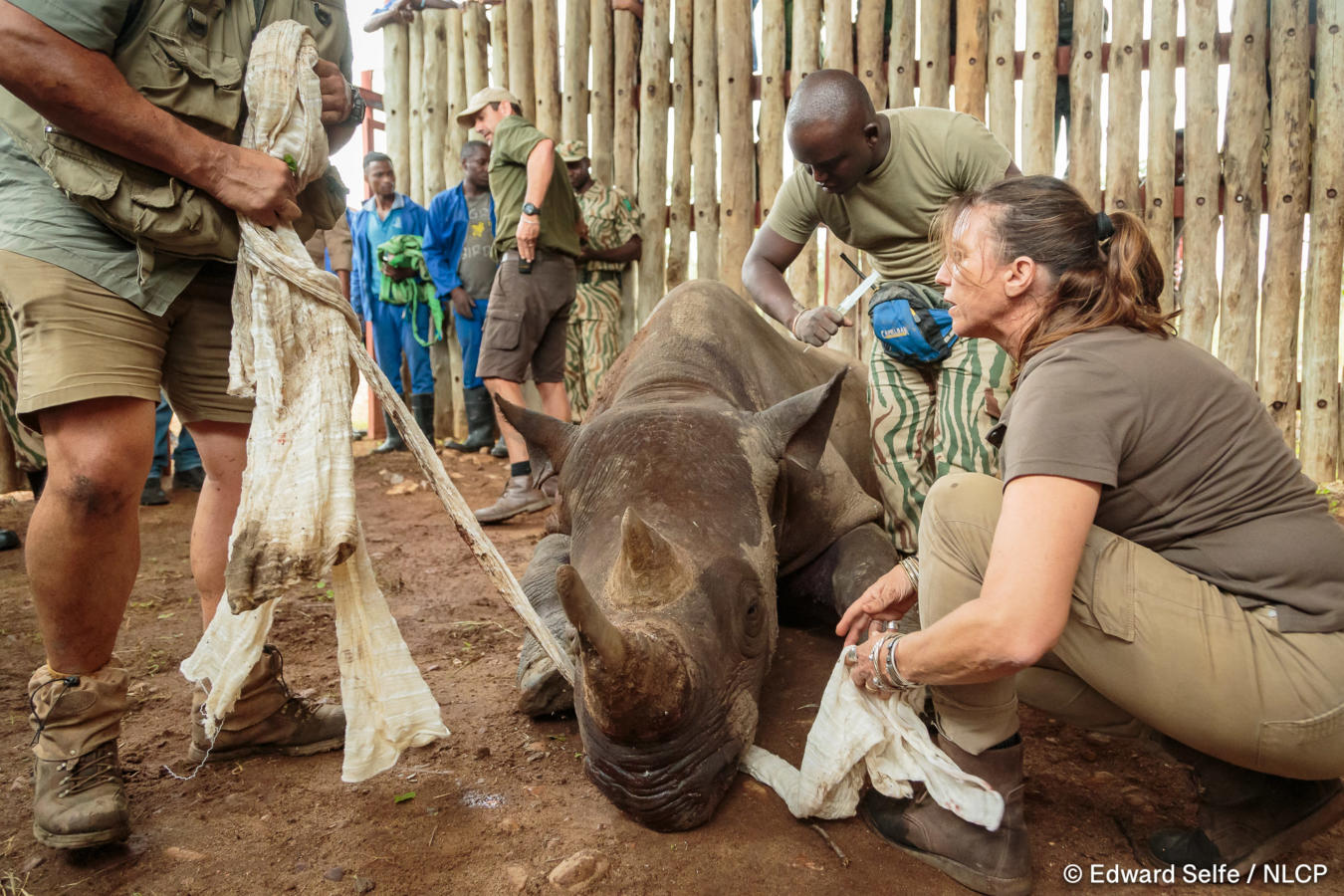 Back in North Luangwa National Park, the rhino was brought into a boma, a temporary enclosure to make sure that everything is ok. 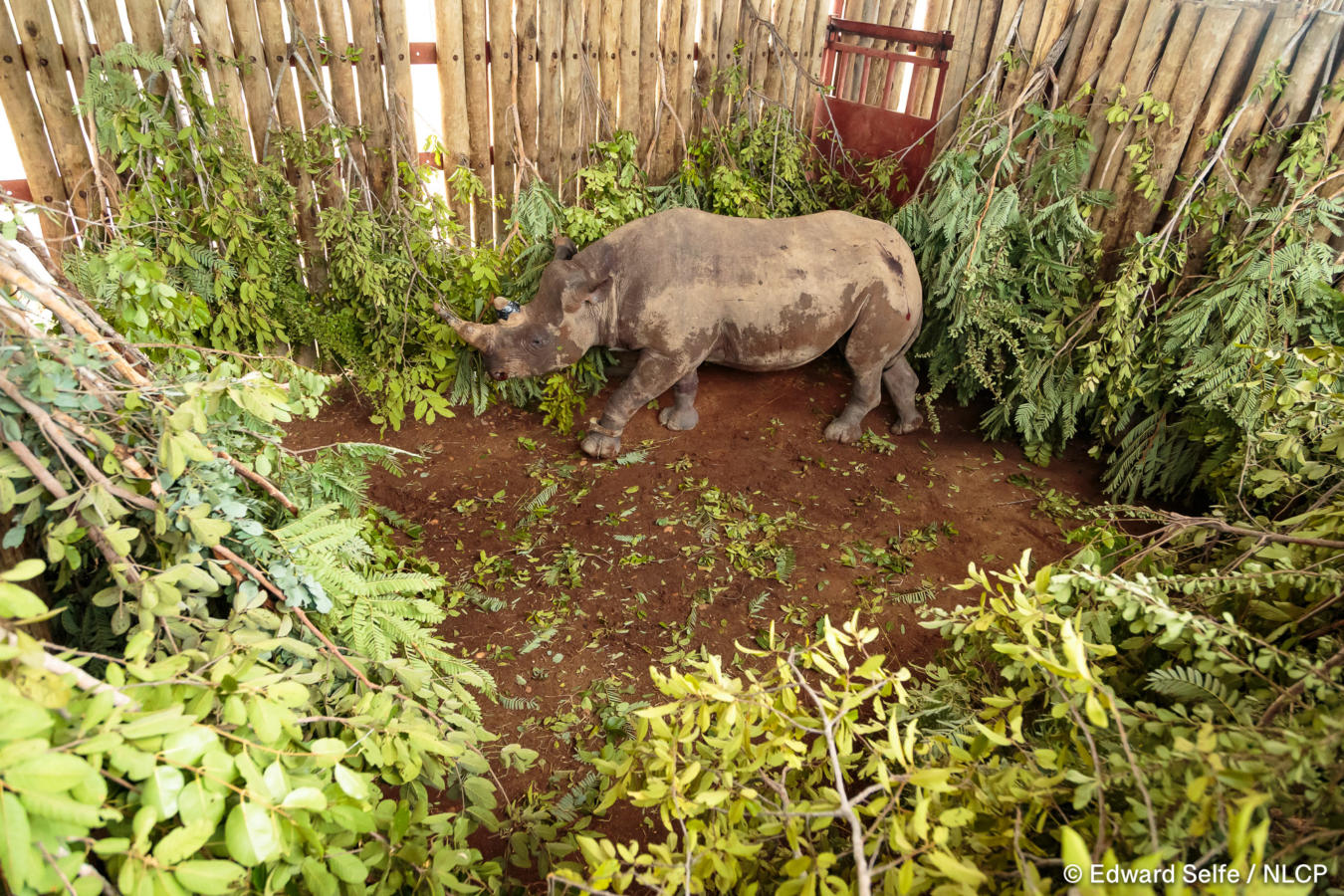 The boma is also a food paradise and allows for easy recovery after the transport.

Before waking him up he was fitted with new tracking transmitters and over the next few days and weeks, he will be carefully monitored in these bomas, before being released back into the rhino conservation area in NLNP. Despite the seemingly traumatic ordeal, he is already feeding well and, both amazingly and thankfully, showing no signs of any ill effects from the journey.

It is hard to describe how ambitious this operation has been from the planning and logistics to pioneering cutting-edge veterinary and physiological care. It was extremely challenging, with both high risk and high reward. It has been possible only through the extraordinary collaboration between the different Zambian state agencies (ZAF / DNPW) and the FZS / DNPW NLCP partnership, with vital support from CSL/ZCP, Parsons Aviation, Ultimate Heli, Bushcamp Company, and Oak Foundation/RRF. Additional thanks too to African Parks Network and Sungani Lodge for supporting the transmitter fitting on this rhino in late 2021 enabling the REPU teams to track and monitor him so diligently in the months leading up to his rescue. 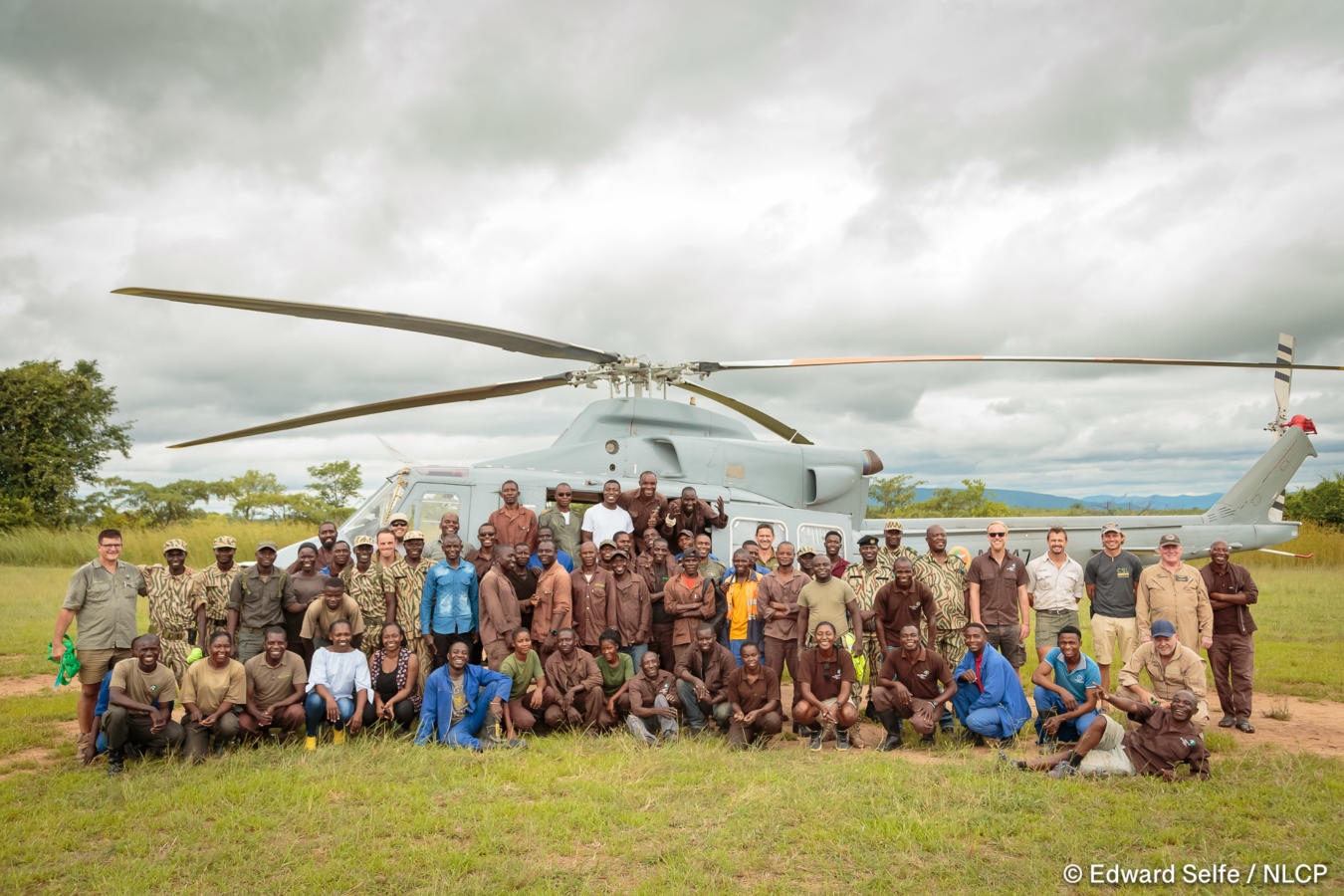 So the ultimate recognition must go to them – the NLNP Rhino and Elephant Protection Unit, REPU – whose unwavering dedication and expertise protected and tracked this rhino. All of these wildlife officers have been recruited from the North Luangwa communities and they exemplify what it means to have a true sense of ownership of their work, as well as the responsibility and dedication required to protect this endangered species. Their commitment to landscape-level protection and the communities living within the northern Luangwa ecosystem is critical to their livelihoods that are so dependent upon the success of conservation in the area.