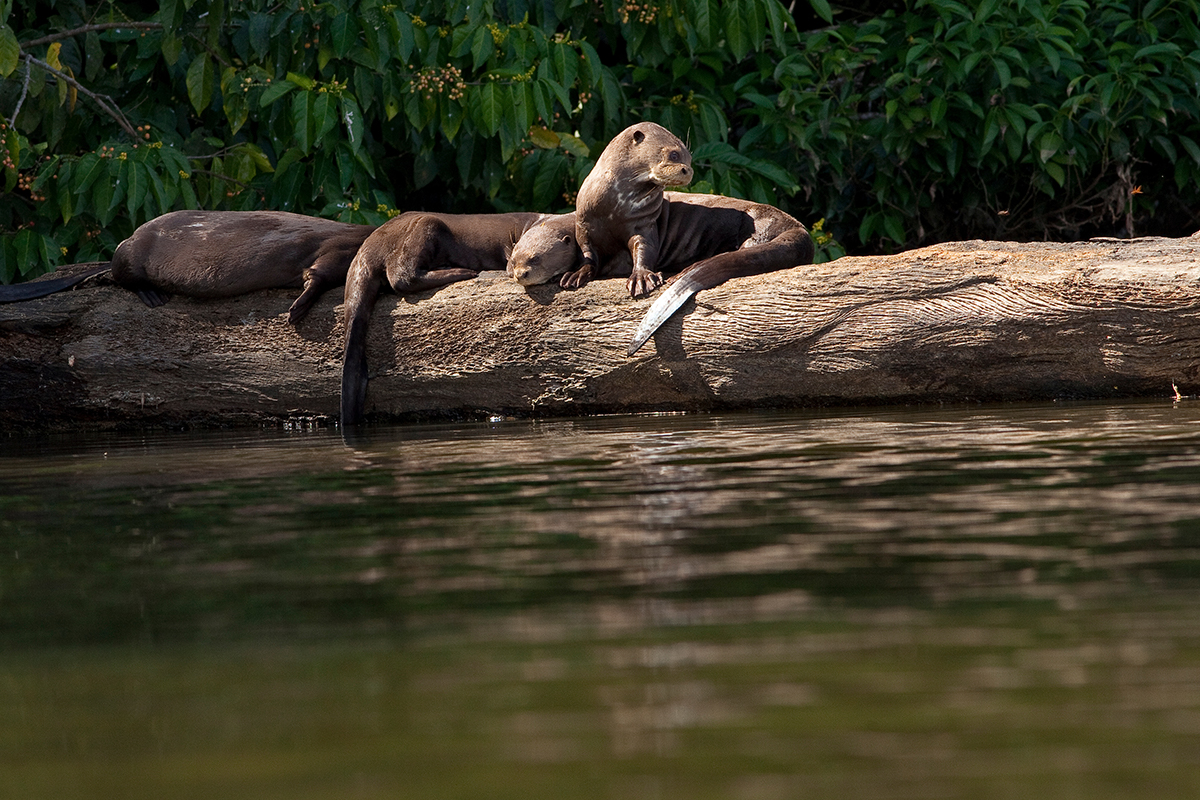 From seed to tree

30 years ago, two young biologists embarked on a research project to study giant otters in Peru. The results of their work are felt even today, in surprising ways.

How it all began

Embarking on a research project is like sowing an unidentified plant seed. Will the end result be small with limited impact or will it be so big that it changes the world? The seed that Christof Schenck and Elke Staib planted with their giant otter research and conservation project 30 years ago, produced results that still reverberate throughout the region today.

Imagine being a young couple, both of you are biology students looking for your next big project. For inspiration, you decide to embark on an adventure to a part of the world that is so remote you need two weeks of travel by foot, boat, and car, as well as a great deal of help from a local guide, to get to your destination, Manu National Park. 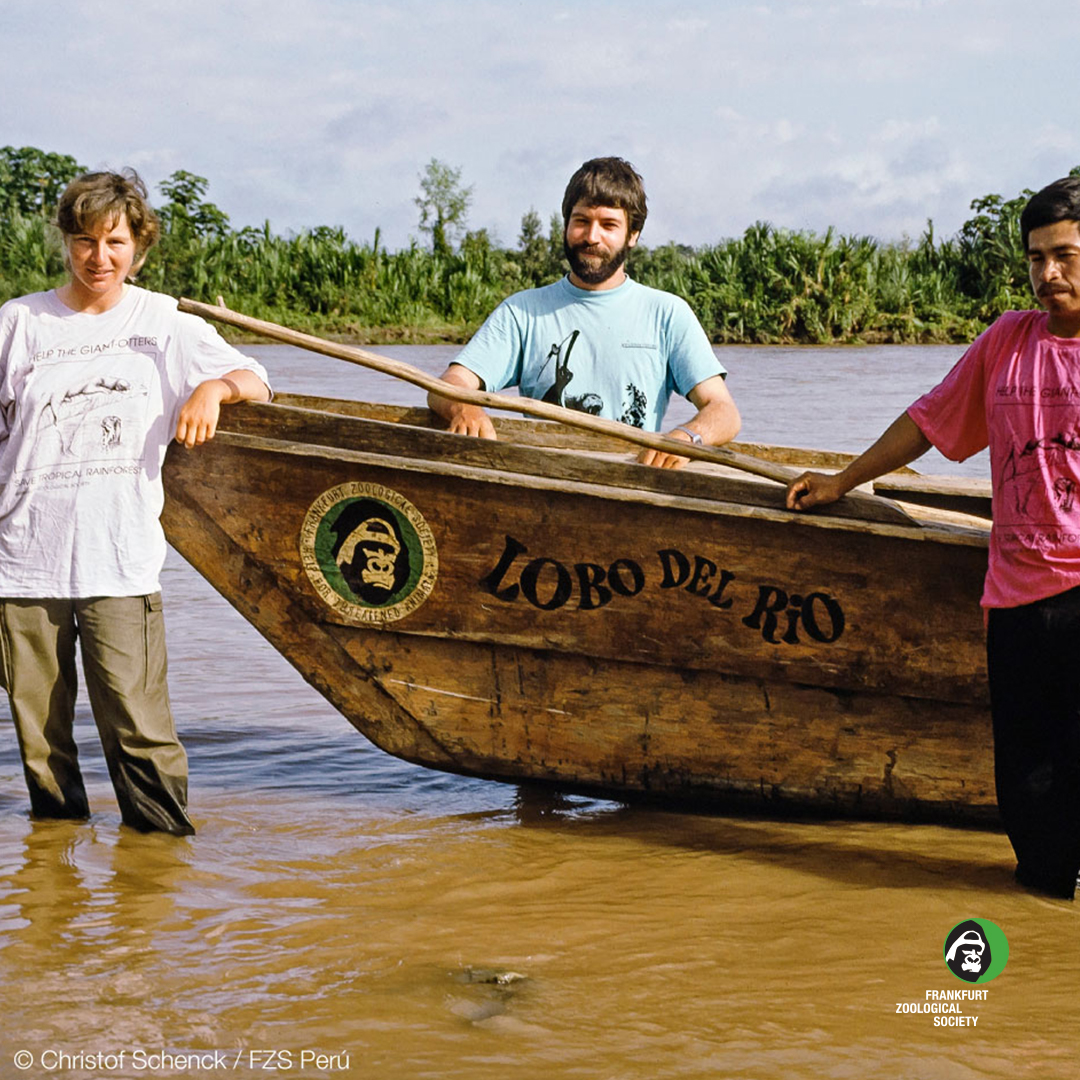 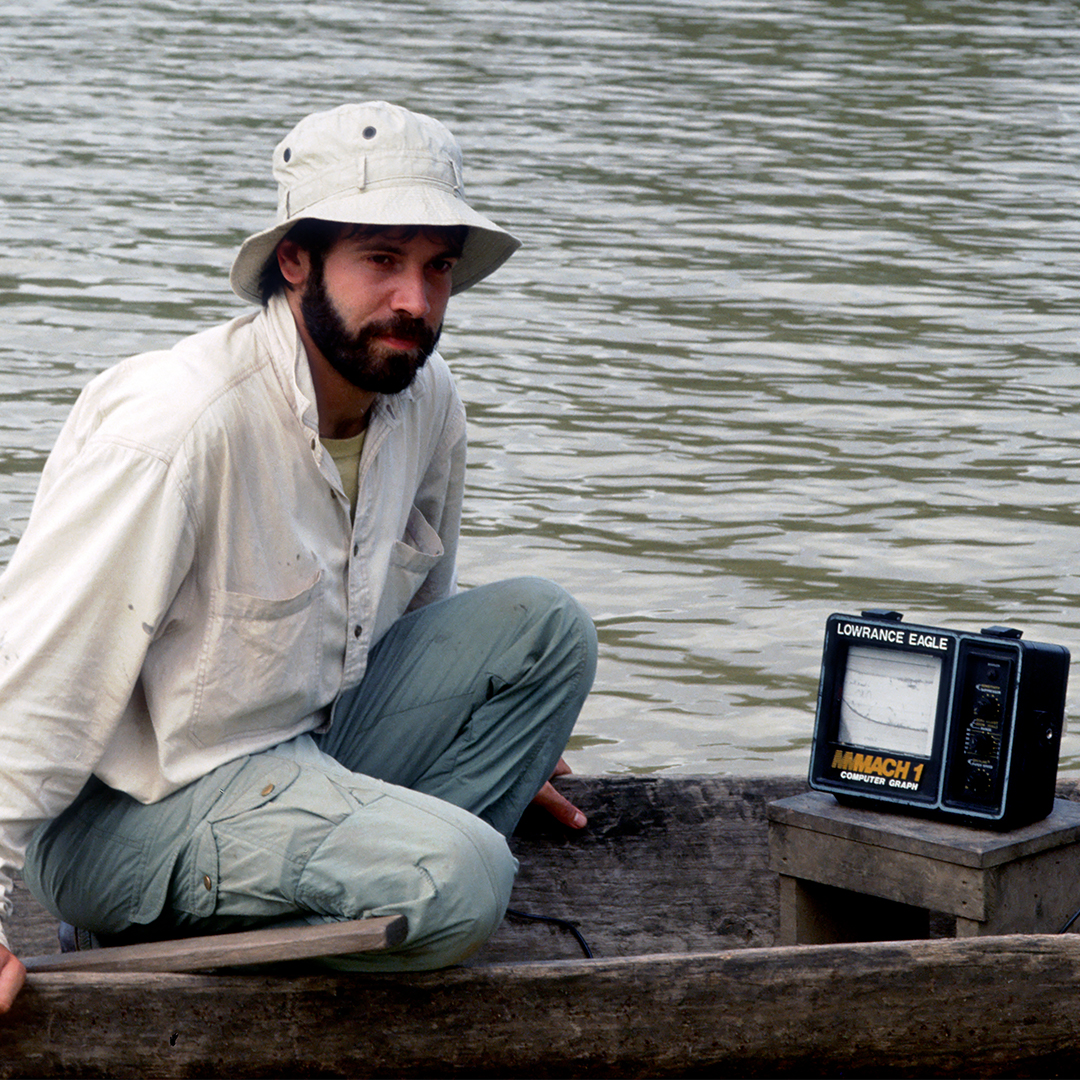 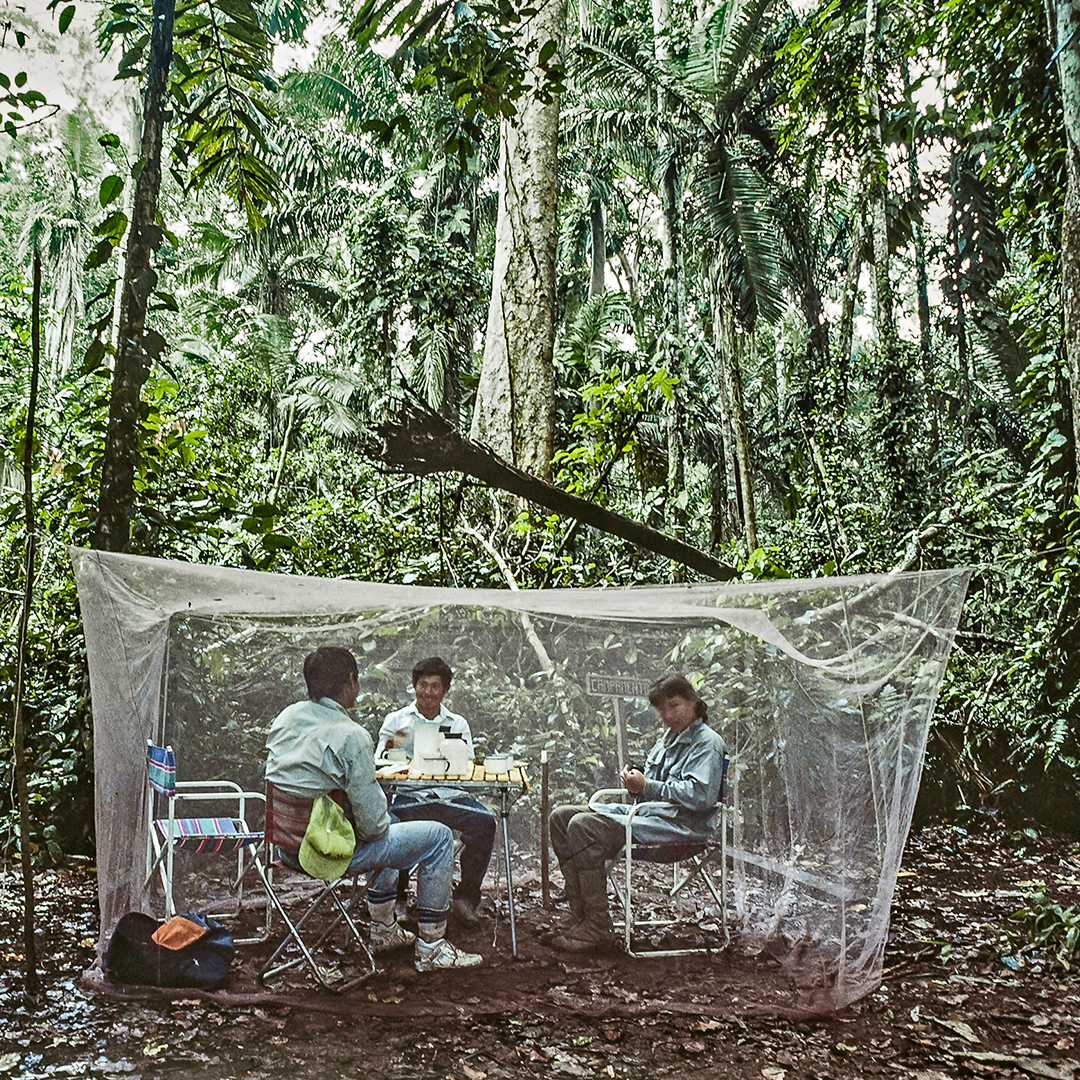 This is exactly what Christof and Elke bravely did, in 1985, at a time when the only source of information about the National Park was a handbook about South America. The two were lucky though, they were in yet unrecognized wildlife “global treasure chamber” as Christof calls it. They had a near-endless variety of animals to examine, over 1,000 species of birds, for example. But it was the giant otters that caught their attention.

“We were heavily impressed by the giant otters and so we went home and we did a literature study as it was at that time because there was no Google and Internet” says Christof.

They were lucky again, because as it turned out, there was barely any information on the otters at all, apart from two key pieces of information: that the animals are a critical species for the ecology of the region and that they were going extinct. These, as Christof says “were the reasons and the motivations to set up our research project”.

Five years after their initial trip to Manu National Park, Christof and Elke returned, armed with financial support from the Frankfurt Zoological Society and both with Ph.D. project plans in giant otter behavior ecology and conservation. 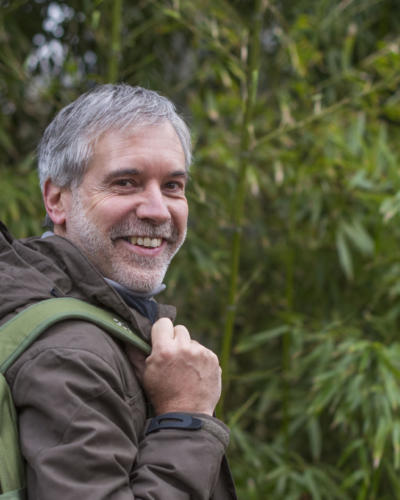 But it was no walk in the park!

Living in a rainforest that is poorly connected to civilization can be a fantastic adventure. Until the mosquitos find you, you discover that clothes never dry, your passport nearly disintegrates because of the humidity, and there is no way for you to get additional resources as fast as you would like to. As explained by Christof: “Our trips were about three to five months at a time, which meant we had to bring everything we needed. To survive we had to be very organized and plan really everything, if something was forgotten, then it was forgotten for the next three months.” 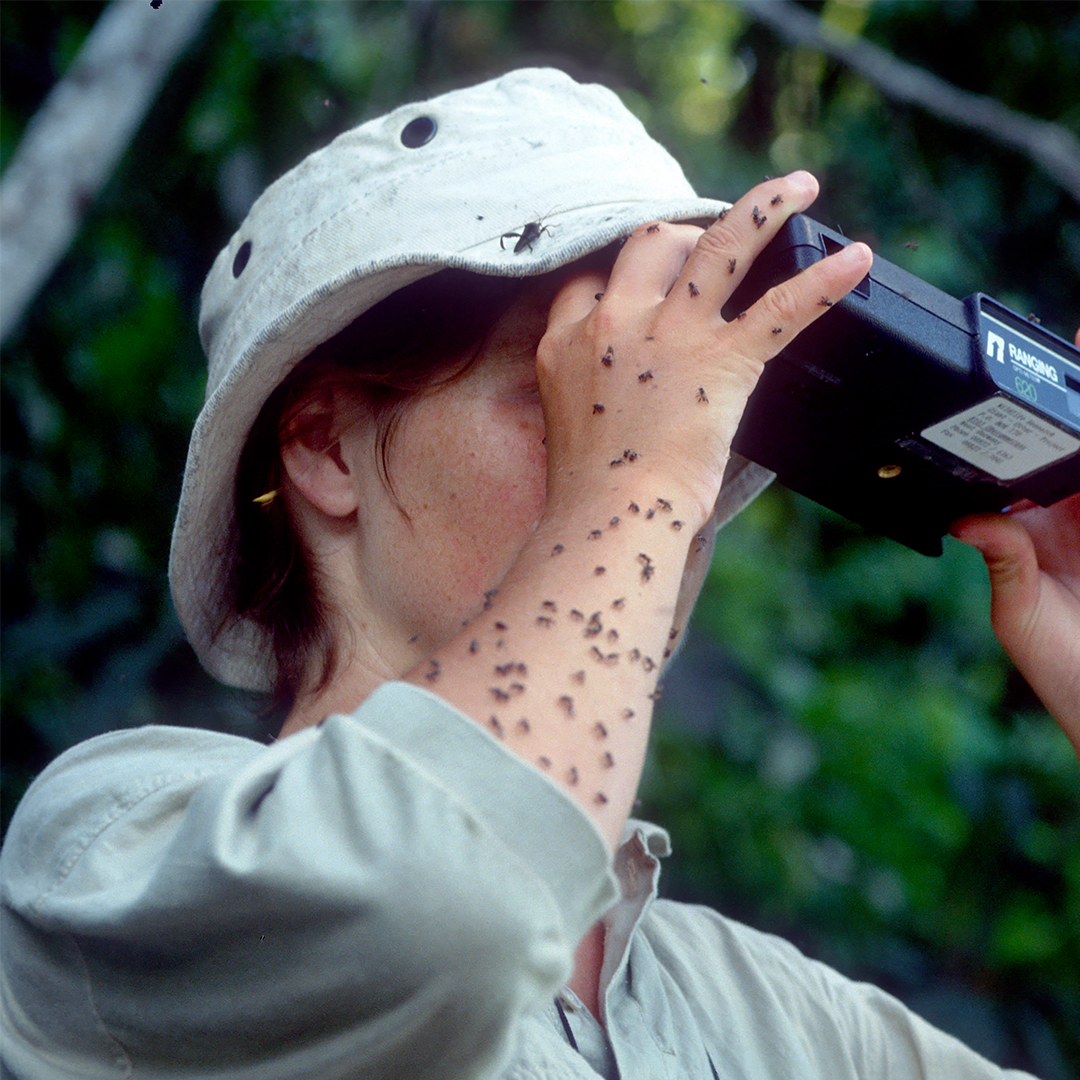 Some of the challenges that faced Christof and Elke may have been tiny, but very unpleasant. © Christof Schenck

Passports were nearly destroyed by the incredible humidity. © Christof Schenck 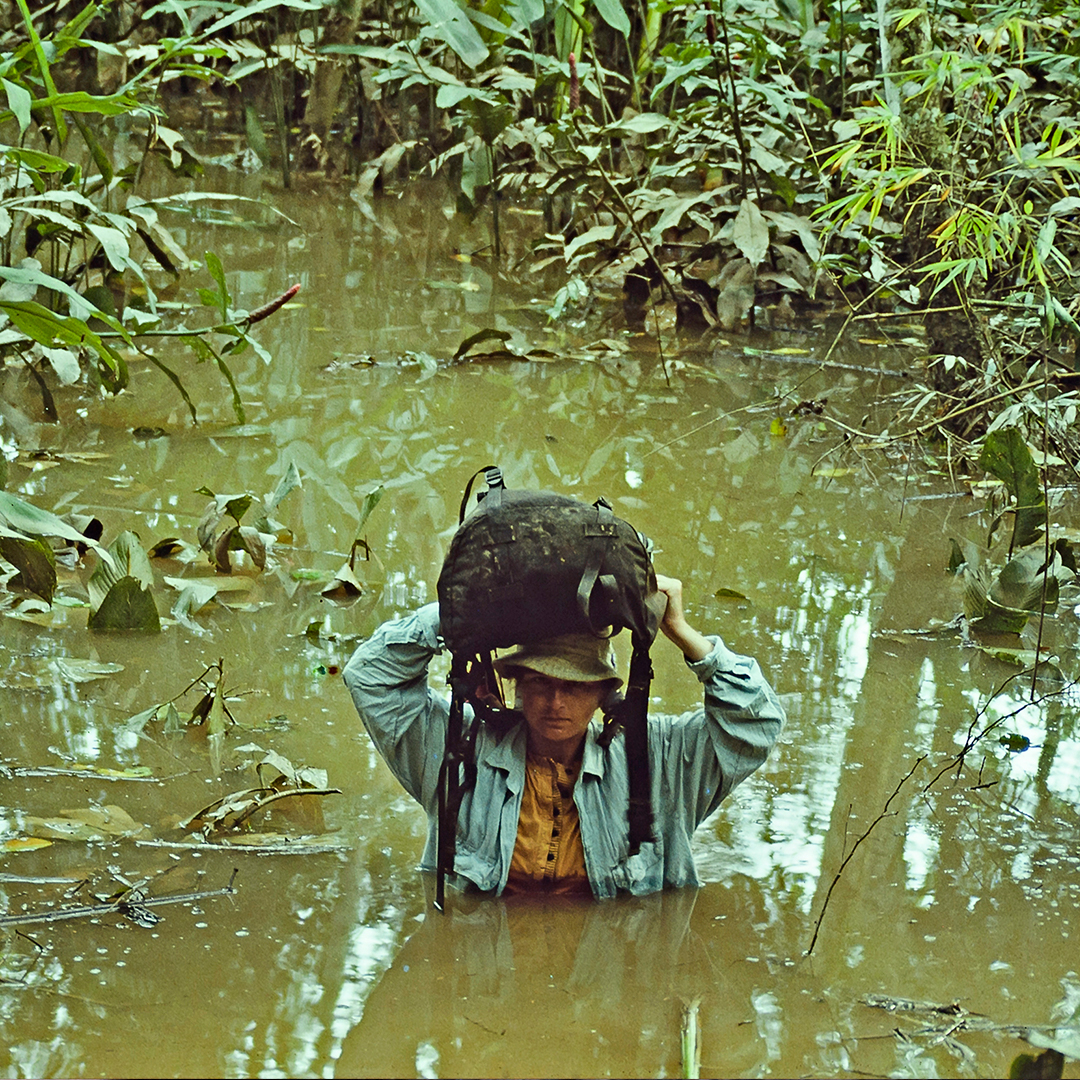 They were very dedicated to the cause. © Christof Schenck 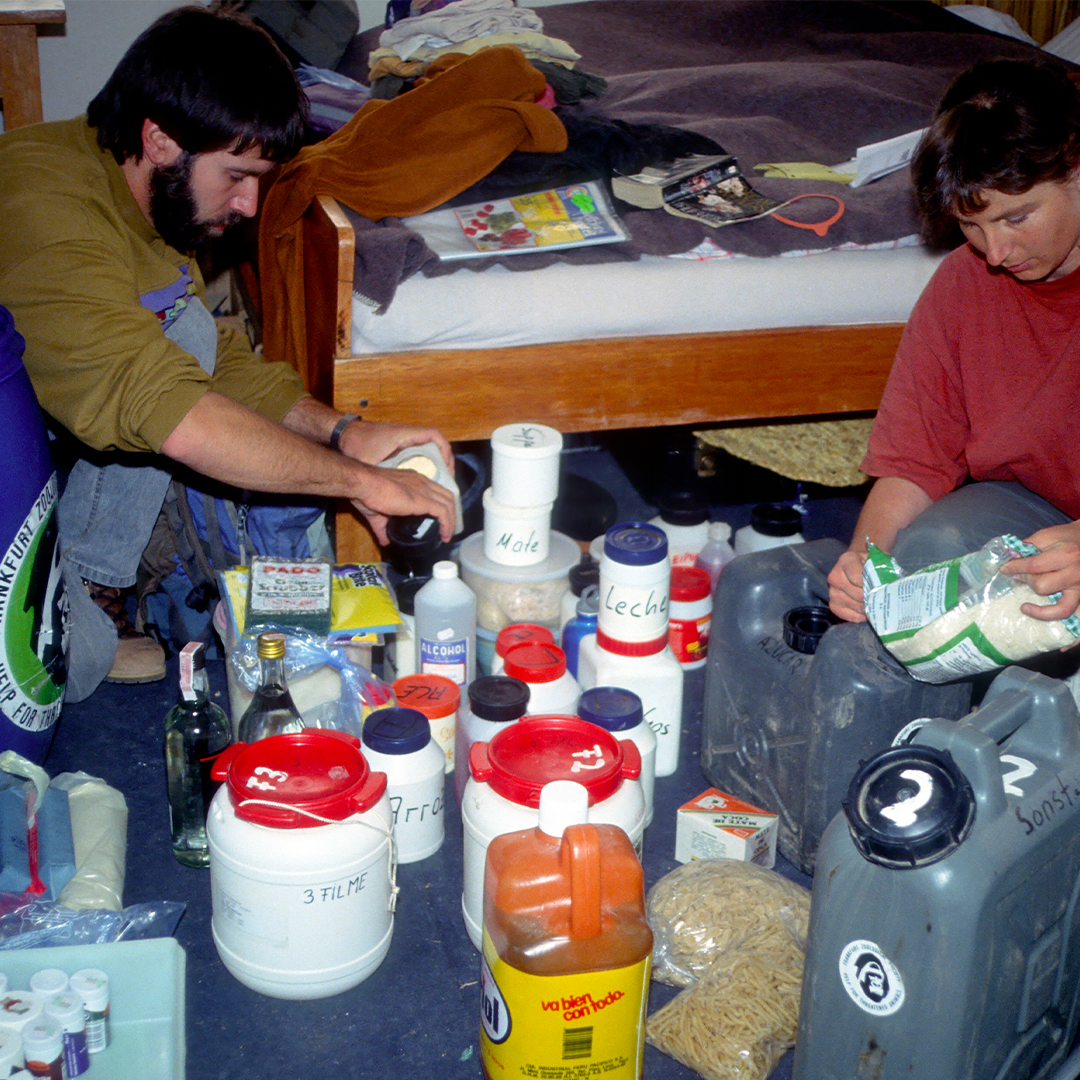 Being well prepared was critical for their survival. © Christof Schenck

Despite all of these challenges, Christof and Elke persevered. Their passion for the research and the love they had for the area kept them going for several years. During those years, they collected data about giant otters and their surrounding ecology, such as the negative impact of tourism, as well as the influence of mercury leaching from illegal gold mining on the otters and nearby communities.

The results of their findings benefitted their Ph.D. theses but also went further by evolving into a long-term plan of action for the conservation of giant otters in the country, that in 2002 came to be known as the ‘Andes to Amazon Conservation Program’. This program, established in partnership with Peru’s National Park Authority SERNANP, consists of many tasks such as biological monitoring of the giant otter and other species, surveillance of the protected areas to make sure illegal activities are not taking place, and environmental education for tens of thousands of young local community members. Many of these educational activities are still in use today, such as specially developed giant otter coloring books for preschool children, mini-ranger programs, volunteering opportunities for young adults, and much more.

2020 marks 30 years since the day when Christof and Elke ventured into the rainforest, for the second time, to start their work on giant otters. But even though their research came to an end after a few years, the impact of their findings and the programs they started led to a multitude of other positive reverberations in nearby communities.

For example, the team that makes part of the conservation program, which now encompasses nine protected areas and over 8 million hectares, went from three to over 50 people. Some of the employees in the team have become professional biologists as a result of having gone through the environmental education activities organized through the conservation program, now they proudly protect the areas they learned about their whole lives.

Those programs and the awareness they increased also led to growth in local pride. This pride became evident in 2011 when FZS, the regional government of the natural protected areas, and tourism authorities of where the giant otters are located came together to legally register it as a flagship species for the Madre de Dios region. Shortly after that, the annual Giant Otter festival, which celebrates the species and runs over the course of several days, was inaugurated. Through entertaining activities such as art competitions, field visits, games, and presentations, awareness about giant otters is brought to people of all ages including local governments, other conservation organizations.

Interestingly, the transformed perception of the species and its new status made the giant otter an animal that tourists suddenly became interested in seeing, thereby boosting the local economy. A secondary benefit of increased tourism is that politicians are more likely to protect this region from environmentally damaging activities that are plaguing nearby areas, such as gold mining, logging, and coca trafficking. Not only that, but the tourism industry in the region changed too, to become better accommodating for the giant otters. In their research, Christof and Elke found that giant otter populations suffered from boats disrupting their habitats. So, to stop this they suggested that alternatives to tourism be established. The regional tourism industry agreed. Since then, Christof has noticed a difference, “now you can travel to these lakes and you can observe the otters and you can see them playing and having their cubs and their populations are going up.”

According to FZS, the impacts of this successful project extend beyond Peru because examples such as this one, are proof that holistically preserving a place that involves local communities makes the project stronger than it could be otherwise. This and the other projects organized through FZS show that really large trees that deliver a world-changing impact can be grown when the passion and dedication of FZS employees and partner organizations along with community members are mixed together. These successful projects are more important than ever before now with the ever-increasing loss of biodiversity worldwide.

Final thoughts from Christof and Elke

Even though Christof, who is now the Executive Director of FZS, and his wife Elke are no longer part of the project, they continue to monitor its progress closely. When they reflect on the humble beginnings of this endeavor, they say: “We feel extremely proud. Not of ourselves but because of what our work resulted in. We did a job, we had fun. There were some challenging times. But we feel proud because we could put the seed in the ground and from that, a big tree has grown and now the system is more stable than it was before.”