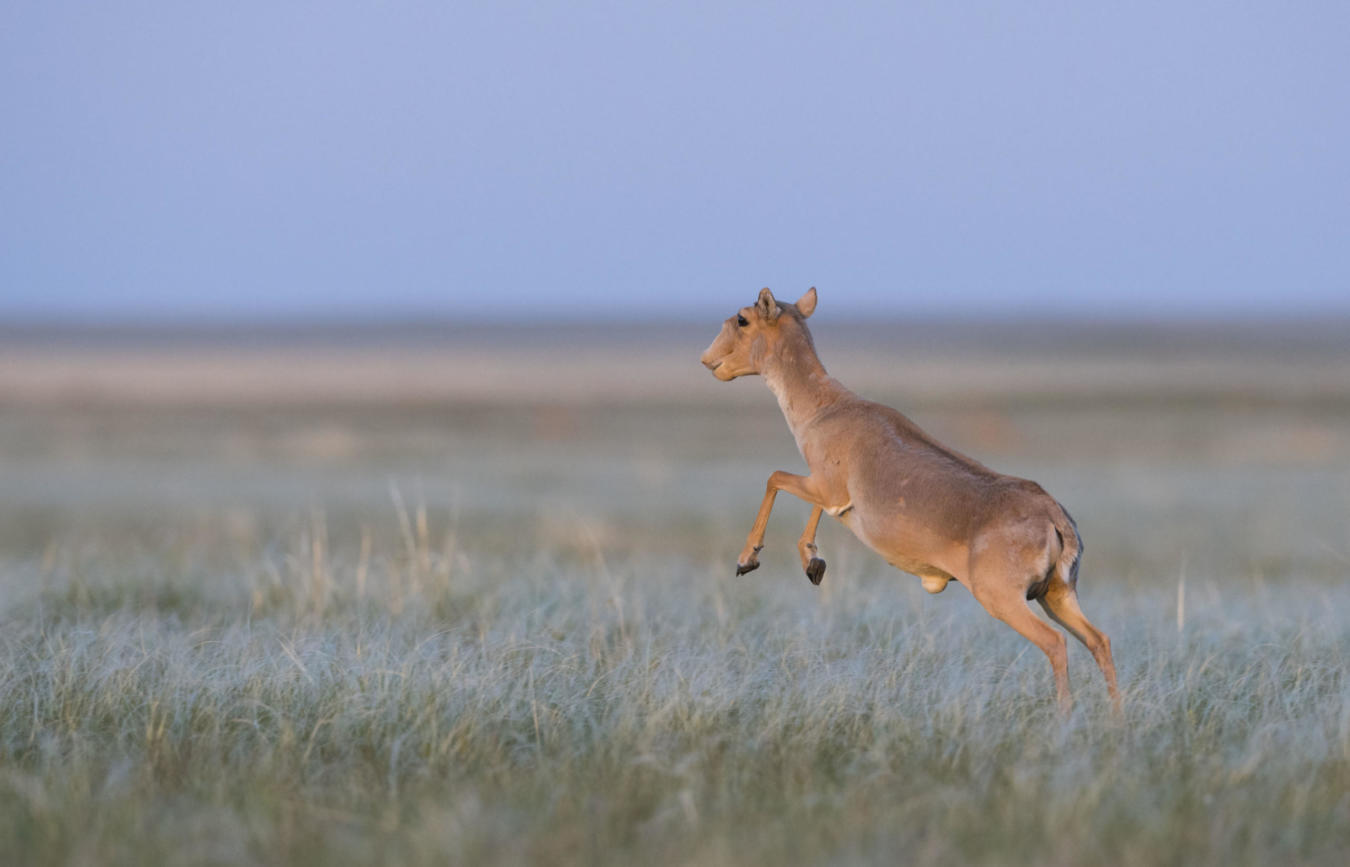 The results of the most recent saiga antelope aerial survey, released by the Government of Kazakhstan last month have shown a boom in the population – with an estimated 842,000 saiga now present in Kazakhstan, up from 334,400 in 2019. Conservationists believe that the increase in saiga numbers is potentially related to several factors including a good food supply and continuing successes in combatting poaching.

Over the past few decades unsustainable hunting, and poaching to supply demand for saiga horn from the east – where it is used in traditional Chinese medicine – has pushed saiga numbers to a critical low. While more recently, in 2015, two-thirds of the global population was wiped out by a bacterial infection linked to abnormal weather conditions prior to the saiga calving season. The 2015 event left the population in Kazakhstan (home to more than 90% of the global total) more than halved, down to just over 100,000. Since then, there has been a slow recovery, which FZS’s partners in Kazakhstan, the Association for the Conservation of Biodiversity of Kazakhstan (ACBK) have been monitoring closely via their regular participation in the annual aerial census population surveys, conducted by the government of Kazakhstan. The annual survey was not possible in 2020 due to the pandemic.

The population increase is fantastic news for the species and for the country, which is a crucial stronghold for the saiga. The 2003 census – the low point for the population– estimated only 21,000 individuals left in Kazakhstan. But conservation efforts, such as using tracking data from saiga antelope collaring conducted by ACBK through the Altyn Dala Conservation Initiative, and the Government of Kazakhstan’s commitment to tackle poaching and create new protected areas for saiga since then have proved very successful. Despite the serious setback of 2015, there are now estimated to be more saiga in Kazakhstan than at any time in nearly 30 years.

“The saiga antelope are among very few living creatures to have run freely amongst both Neanderthal humans and the humans of the 21st century – it’s exciting to see their numbers start to recover to levels nearing 1,000,000 individuals, and it speaks volumes about the Government of Kazakhstan’s commitment to their protection,” says Stephanie Ward international coordinator of the Altyn Dala Conservation Initiative with the Frankfurt Zoological Society.
There continue to be threats to these creatures from climate change, poaching, disease, and habitat fragmentation. Long-term dedicated conservation partnerships like the Altyn Dala Conservation Initiative are an important part of our collective response to these.

FZS’s contribution to the positive increases in saiga antelope numbers is through the Altyn Dala Conservation Initiative, which is spearheaded in Kazakhstan by ACBK with financial and technical support from FZS, Fauna & Flora International, and the Royal Society for the Protection of Birds, and in partnership with the Government of Kazakhstan’s Committee for Forestry and Wildlife, part of the Ministry of Ecology, Geology and Natural Resources.

Get more of this story from this BBC article.