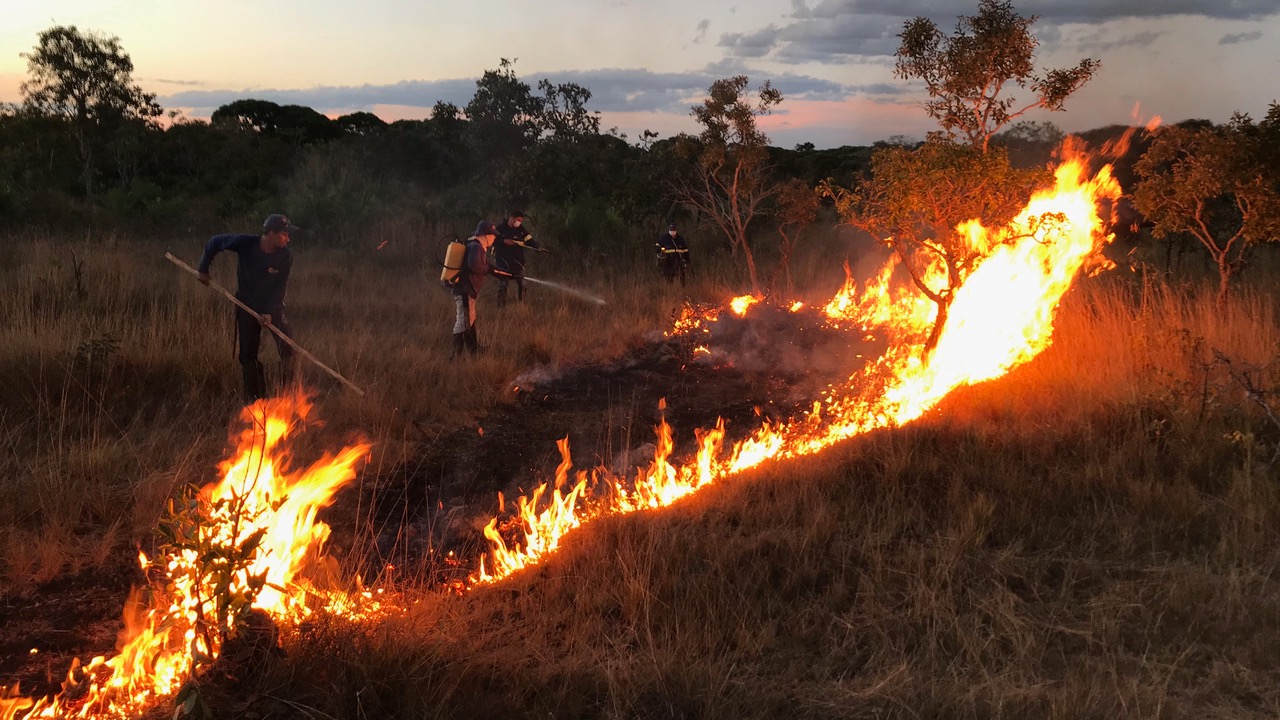 Catastrophic fires tore through Cantão State Park in Brazil two years in a row. George Georgiadis, FZS partner in Brazil, explains why those fires caused so much damage and what the team is doing this year to prevent this from happening again.

In 2020, fires destroyed 10% of our supported protected area, Cantão State Park in Brazil, affecting a huge section of the delicate Igapó floodplain forests, forests that need centuries to recover. “These are the worst fires ever. 13,000 hectares (of 100,000 hectares) of rainforest have been destroyed in Cantão State Park” stated George Georgiadis, FZS partner who co-established Instituto Araguaia. But this was not the only bad fire year, 2019 was just as disastrous. This year, the team has taken extraordinary steps to protect this vulnerable ecosystem.

George, can you tell us about the region you work in?

George: I work for Instituto Araguaia, an NGO that my partner, Silvana and I founded, which operates in the Brazilian Amazon, specifically Cantão State Park and surrounding reserves. This area has a huge abundance of fish, large mammals such as pink dolphins and giant otters, and comparable levels of biodiversity to the most diverse areas in the well-known Pantanal.

The Park contains an Amazonian flooded forest ecosystem which becomes completely submerged during the annual floods. This flooding leads to a migration of terrestrial wildlife out of the Park into the surrounding Cerrado savanna, an area that doesn’t flood. Our reserves are in the Cerrado and serve as wildlife refuges for these animals during these periods.

George: Over the past two years, this area was ravaged by out-of-control fires that were likely started because of illegal fishing camp fires that were not put out properly. The reason the fires became so destructive is because they took place at the height of the dry season. Such fires burn very hot and can cover over tens of thousands of hectares if they are not stopped. If we had not fought the fires, then the reserves would have been completely destroyed. Such intense, hot fires kill many plants and animals that can survive natural wet season fires. Also, repeated burning degrades the vegetation and reduces biodiversity. In the case of the flooded forest in Cantão Park (and also in some parts of our own reserves), all trees burnt by these hot fires are killed, because they are not at all adapted to being scorched. These are forests that take over a century to recover, but only if no more fires ravage the area.

George: In this region, natural fires are infrequent, normally occurring at the start of the rainy season due to lightning strikes. But because the vegetation is wet at this time, the fires don’t go out of control, and they only affect small patches of vegetation before going out. There are even areas around here that have not been affected by fire for many decades.

What is the team doing differently this year to prevent this catastrophe from happening again?

George: This year, we decided to actively prepare for potential fires, which typically happen in August. We knew that we would not be able to patrol the whole area and put out fires when they occurred, we tried that the past two years with poor results. The fires were just too big for our team to handle, and I will be honest, we have, in previous years, received limited support from the government to combat the fires, because forest protection is not a priority for the current government, so it is mostly up to us to protect this ecosystem.

So, this year, to increase the protection of this area, we built fire breaks. These are basically strips of cleared or plowed land that stop the spread of fire because all combustible material has been cleared away. We knew this would take a while, as the area we work in is big and fire breaks can only safely be made under certain conditions, so, we started this work early, three months before regular peak fire season.

To create these strips we needed equipment, so we invested in a new tractor, plow, mower and we were gifted a 6,000 liter water tank from the Frankfurt Zoological Society. The first step that our reserve manager, fire coordinator, Telma, and six rangers took was to start plowing a double-wide strip along the entire planned firebreak. The plow was used to push all vegetation and combustible matter underground, which then exposed the soil.

We then started fires. Sounds strange, doesn’t it? starting a fire to stop one. But this was the best way to burn off even more of the combustible material. This was done very carefully, because nearby is the rare Cerrado savanna, an area that is very susceptible to fire.

To make sure that they had control over the fires, the team took a few important steps. The first was that they worked in the early evening, when there was less wind and the temperatures lower than during the day.

Then they started small fires up to 15 meters away from the road that was created, controlling the direction of the fires using blowing machines. To make sure that smoldering embers did not cause a new fire, the team would always spend a few days monitoring each area.

What happens if fires cross the firebreak?

George: It depends on the time of day and the vegetation. If a fire appears in the late afternoon or at night, we can usually put it out, because it will spread slowly. If a fire outbreak happens in the middle of the day, when it is hot and the wind is blowing, we can contain it with great effort inside the forest, but it is not possible to stop or put out a fire on grassland in the middle of the day. This is why a firebreak needs to be wide enough to make it as hard as possible for a fire to jump from outside of the reserve to inside of it. This is really important.

We are currently in September, what is the status of fires in this area now?

George: So far a few fires have broken out not far from our reserves, one was 7km away and would have reached our reserves had we not helped put it out.

The firebreaks are our last line of defense. Whenever possible, we try to fight fires while they are still far away, so that the firebreaks won’t need to be used.

Thank you, George, for your time!

The mission of Instituto Araguaia is to protect the biodiversity of the Araguaia River basin and its ecological processes, in particular inside and around Cantão State Park; to carry on scientific research and to disseminate scientific data that will contribute to the region’s conservation; to develop and to implement a community outreach program that is economically and environmentally sustainable; to undertake the legal actions necessary to carry on this mission.

Since 2012 FZS has been supporting the work of Instituto Araguaia in Cantao.

For more information about the 2020 fires in Cantão State Park in Brazil, check out page 52 of the 2020 FZS Annual Report.