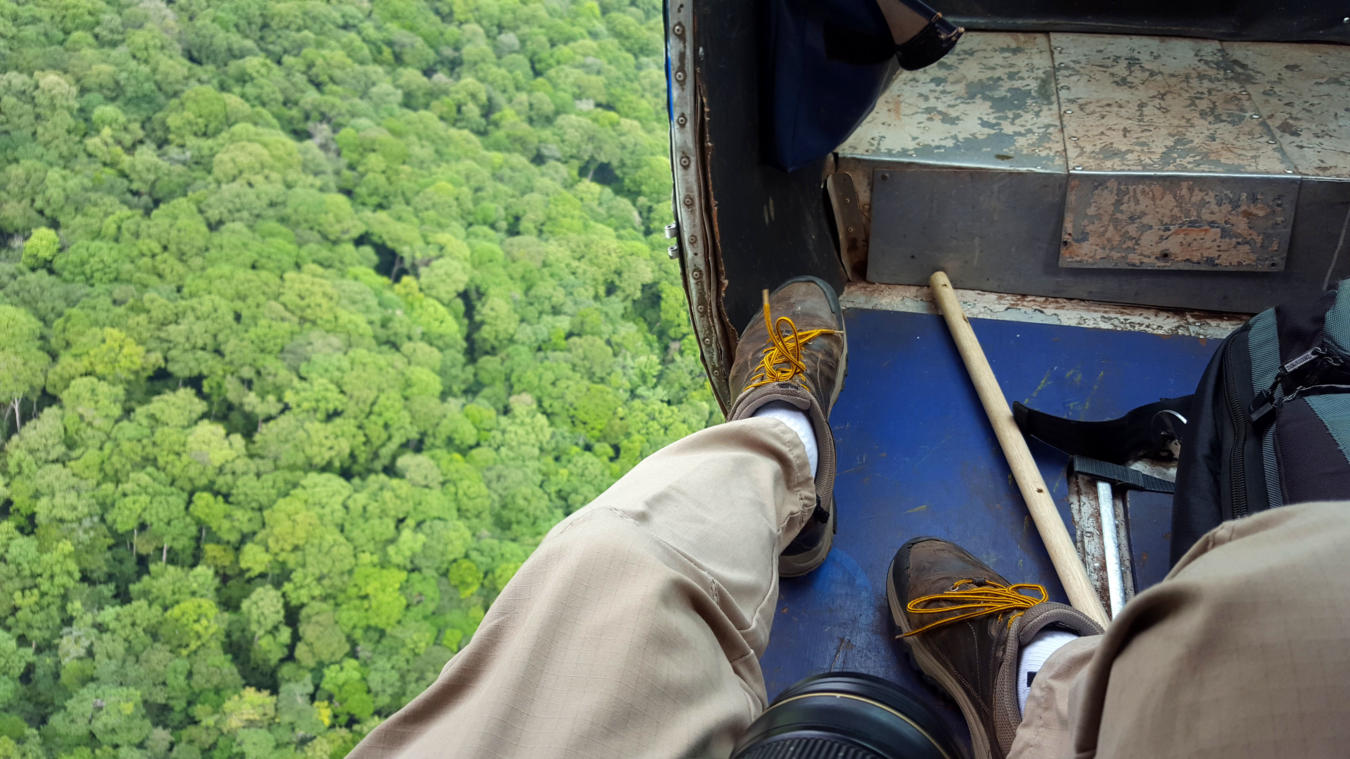 Would you remove an airplane door to take photos?

Marco Dinter, the voice of the FZS and Frankfurt Zoo podcast “Hinter dem Zoo geht’s weiter” (the story continues beyond the zoo), spoke with FZS photographer, Daniel Rosengren, about how he once removed an airplane door to take photos, was almost crushed by an elephant and his adventures cycling half the planet. Enjoy their conversation: 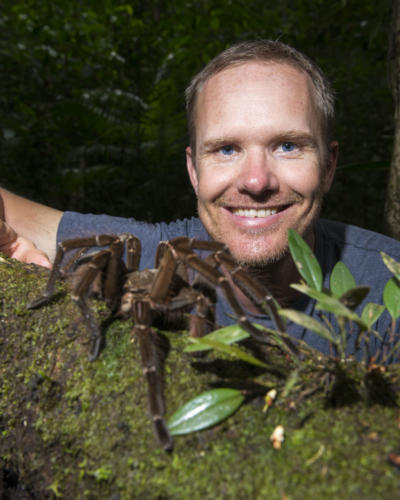 Daniel Rosengren regularly travels to the FZS supported project areas and photographs landscapes, people, and animals. He is a self-taught photographer with a Master’s degree in biology. He loves being out in nature, and he can’t stop looking out for an image, no matter if he is holding a camera in his hands or not. For five years he lived in the Serengeti National Park conducting lion research.

To listen to Daniel's stories enjoy this podcast

Hi Daniel, your curriculum vitae is anything but normal. Have you always wanted to be a photographer?

Daniel: No, I first thought I would become an artist or painter. It was later that it occurred to me that I could become a photographer. But I was also always interested in nature. In Sweden, I lived right next to the forest and I liked going there. Then later I decided to study biology.

Do you remember your first picture or first camera?

Daniel: My very first camera was a simple analog. When I was a teenager, I borrowed my dad’s SLR camera, it was also an analog, from the 60s, but it had a proper lens. I took it and walked out to the woods, and pretty soon there was a moose standing there very close, I took photos of it and shortly after I saw a Harrier flying really close and was able to photograph. I remember thinking, oh, this is easy. But later, it turned out that it’s not always that easy. That it can be quite difficult, and you rarely get that lucky, actually.

When did you sell your first picture?

Daniel: In my hometown, Gävle, Sweden, I once gave talks about the bicycle trips I went on. After the talks I had a few printouts of the trips for sale. A few people bought some!

Can we come back to this bicycle trips just out of interest. Where did you go? And where did you cycle?

This is where I started to really learn how to take pictures. I saw really special places, lots of new stuff, which encouraged me to take pictures for others but also for my own memories. This was especially the case during the second trip when I had a digital camera. All this practice helped me improve my skills.

And you've improved a lot because your photos were recently on the cover of the National Geographic magazine, for example. How do you shoot a professional picture? What does it need?

Daniel: You need a subject. In wildlife photography that’s usually an animal. And then the eyes are very important, you want to capture expressive eyes. But I would say actually the background is even more important. It tells the story of the animal of the landscape it lives in and so forth. Light is crucial. Midday light sunlight, which many people like to take photos in, is not great in photography because it’s very harsh light which means shades are too dark. Morning or evening with golden light is very nice, but so are cloudy days. 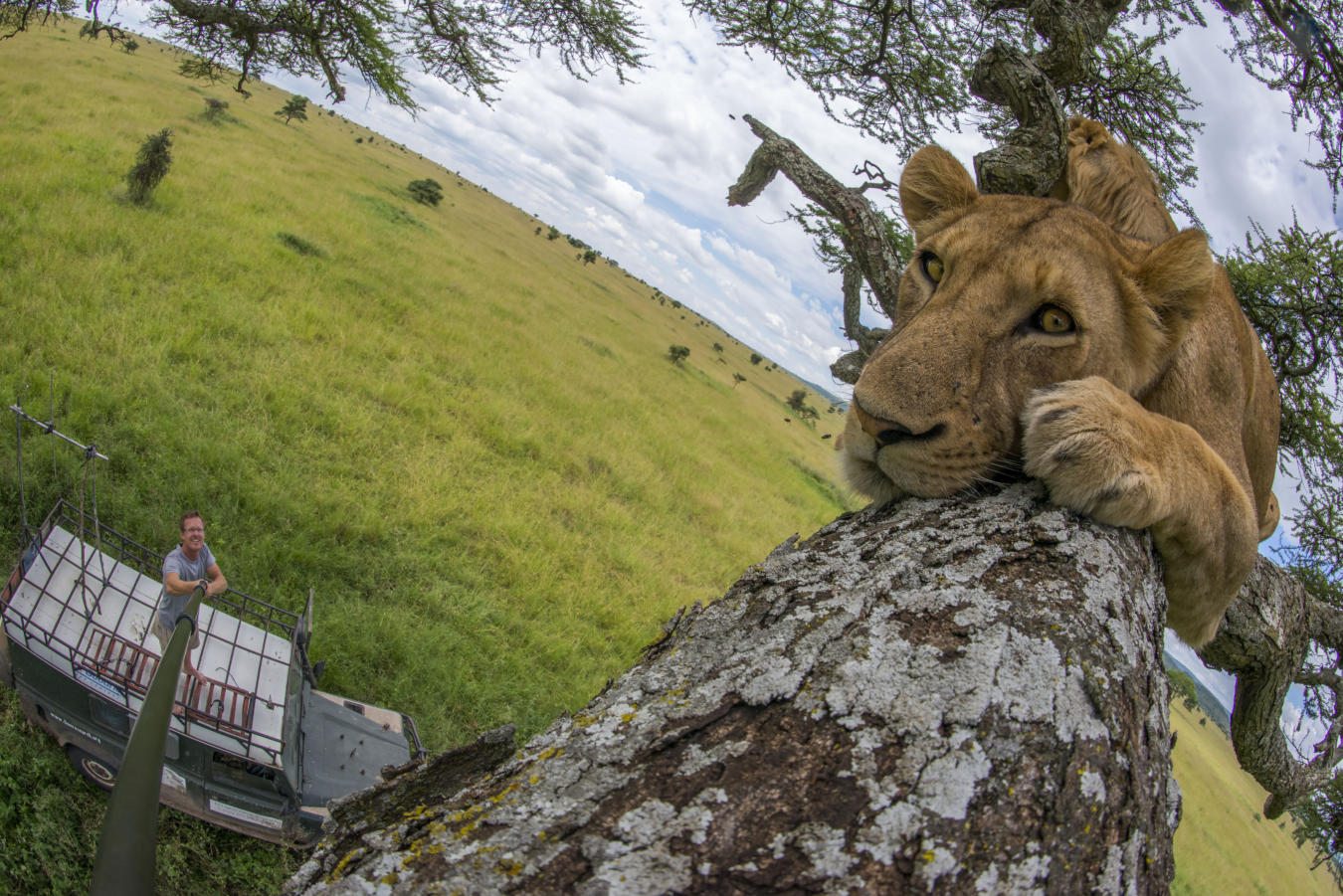 You recently won a prestigious prize for a picture you took. It was shot in the Colombian rainforest and shows a gigantic hole with a forest growing in the hole. How did this picture come into being? How did you take that shot?

Daniel: I was visiting the FZS project area, Chiribiquete National Park in Colombia where this photo was taken. I was traveling by plane to the Park so that I could explore it on foot with other FZS staff, but on route, the pilot said that he knew the most scenic parts of the Park. So, he flew us over this hole in the ground. I had the front seat next to him, great for taking photos.

But the window was in the way. So, I opened it. But the wind was very strong and tried to rip the camera from my hands. It was important to hold the camera really tightly and still so that the photos would not be blurry.

But still, even with an open window, it’s still kind of limiting, especially since I wanted to avoid the wings and the wheels of the plane being in the image. On a different flight I was on, in Guyana, we actually took the whole door off. This gave me a lot more space to move around with the camera. Of course, this could be scary to many people, but I actually liked it. It was a lot easier to work without the door. This is a story my mom is not happy to hear. 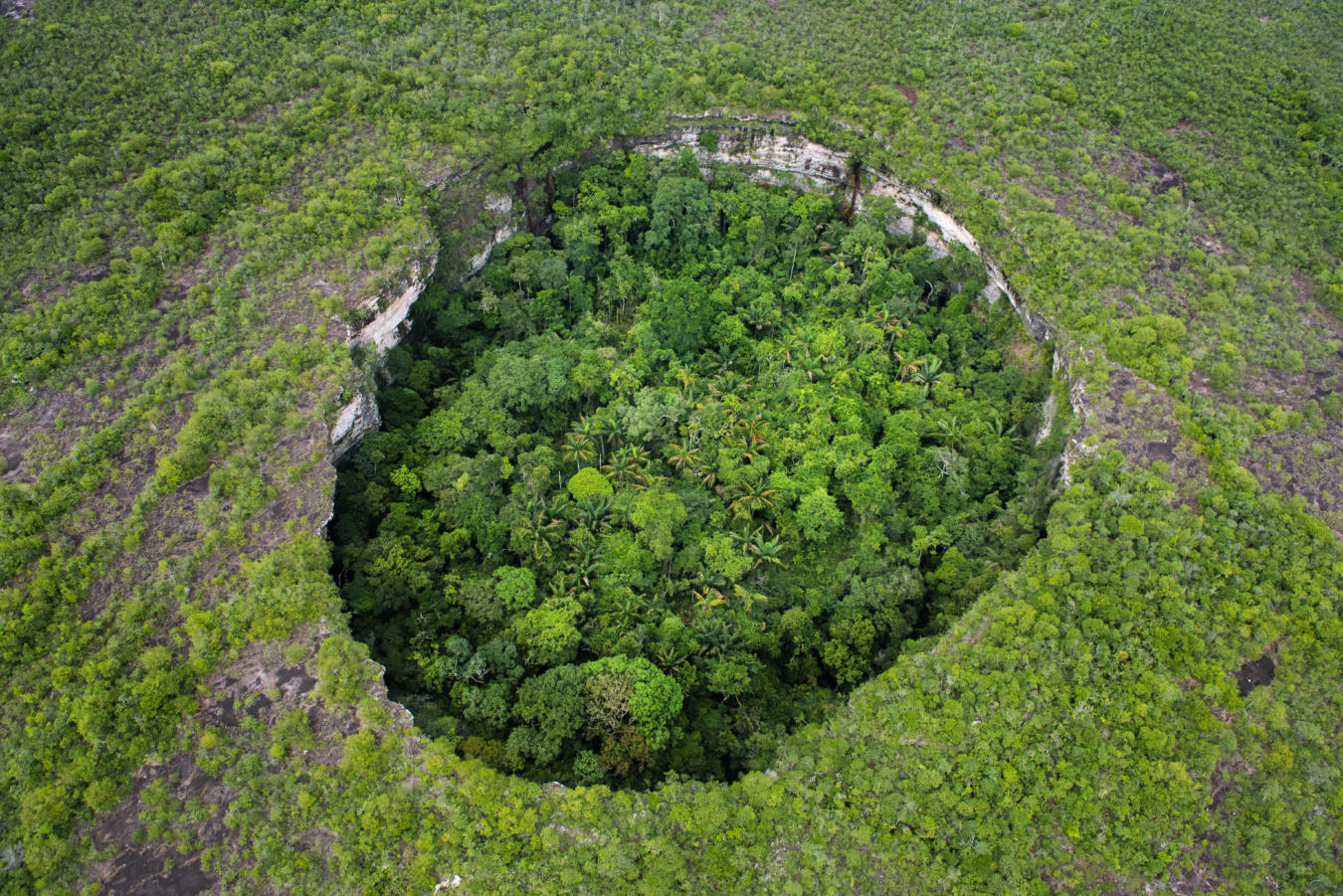 The tepui mountains in Chiribiquete National Park, Colombia. This is one of the photos Daniel took out of the open plane window and it is the photo that received a prestigious award at the Wildlife Photographer of the Year awards 2021. © Daniel Rosengren 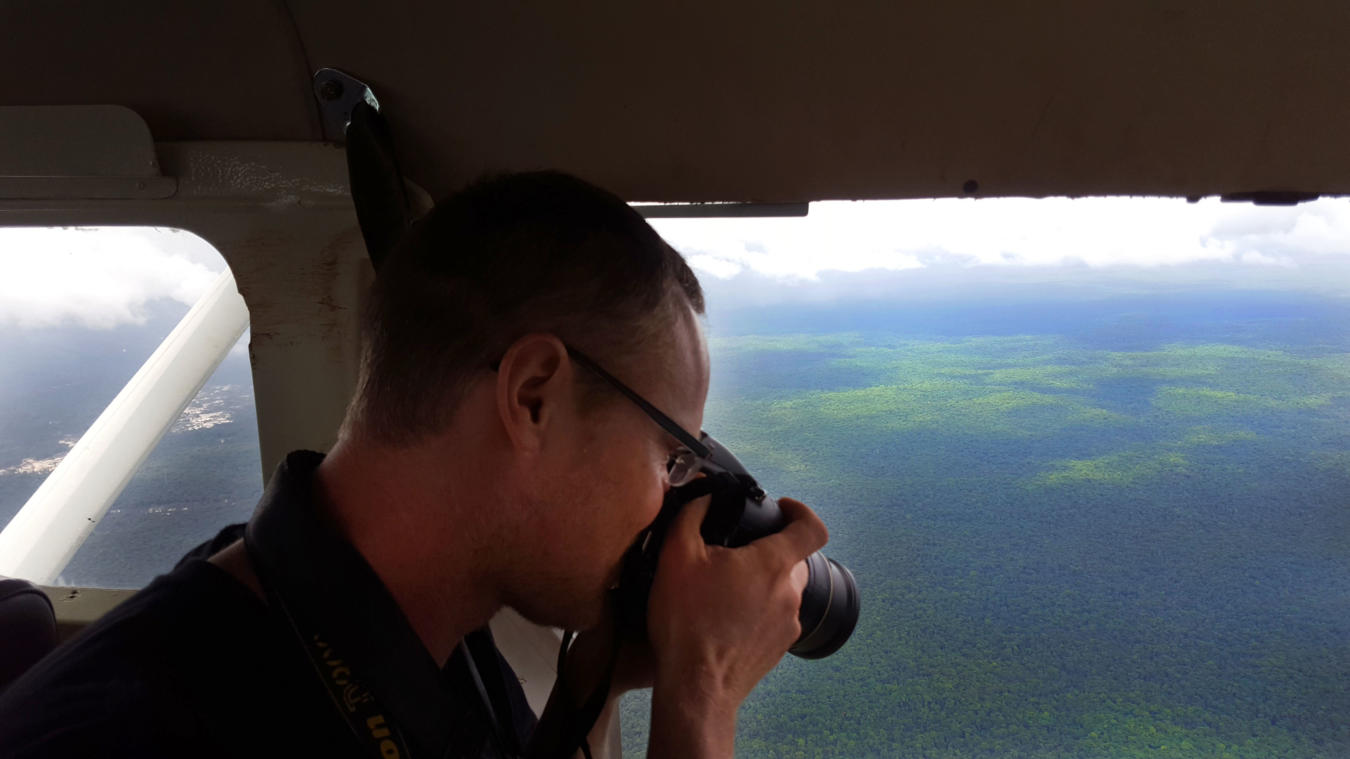 Are you sometimes afraid of getting hurt on your job?

Daniel: I guess there are risks, but being a biologist, I know that animals are normally not out to get you. I also know their body language and can tell when they are upset or when they are relaxed. It really helps. And it also helps not to be scared.

But one time, when I was taking photos of elephants in the rainforest in Sumatra Bukit Tiga Puluh National Park, one of our projects, the team I was with and I got a bit too close. Unknowingly and unintentionally, we had actually cornered some elephants. We hadn’t realized that there was a river behind them, so, they had no way to escape and ended up trying to attack us. It was not a mock attack. It was a real attack to actually get us. I must have been a meter away from being crushed by this elephant. I was running in rubber boots. They were slightly too big and my legs felt like spaghetti and I just saw this fallen tree and I thought if I can somehow get under the tree or something, I might make it. I could hear an elephant trumpeting furiously behind me, and I felt it was gaining on me. I stumbled under this tree and I was lying on my back looking up at this elephant coming at me and I thought, this is it. But then because I was lying still and elephants don’t see well. It missed me by about a meter and just continued running and disappeared. 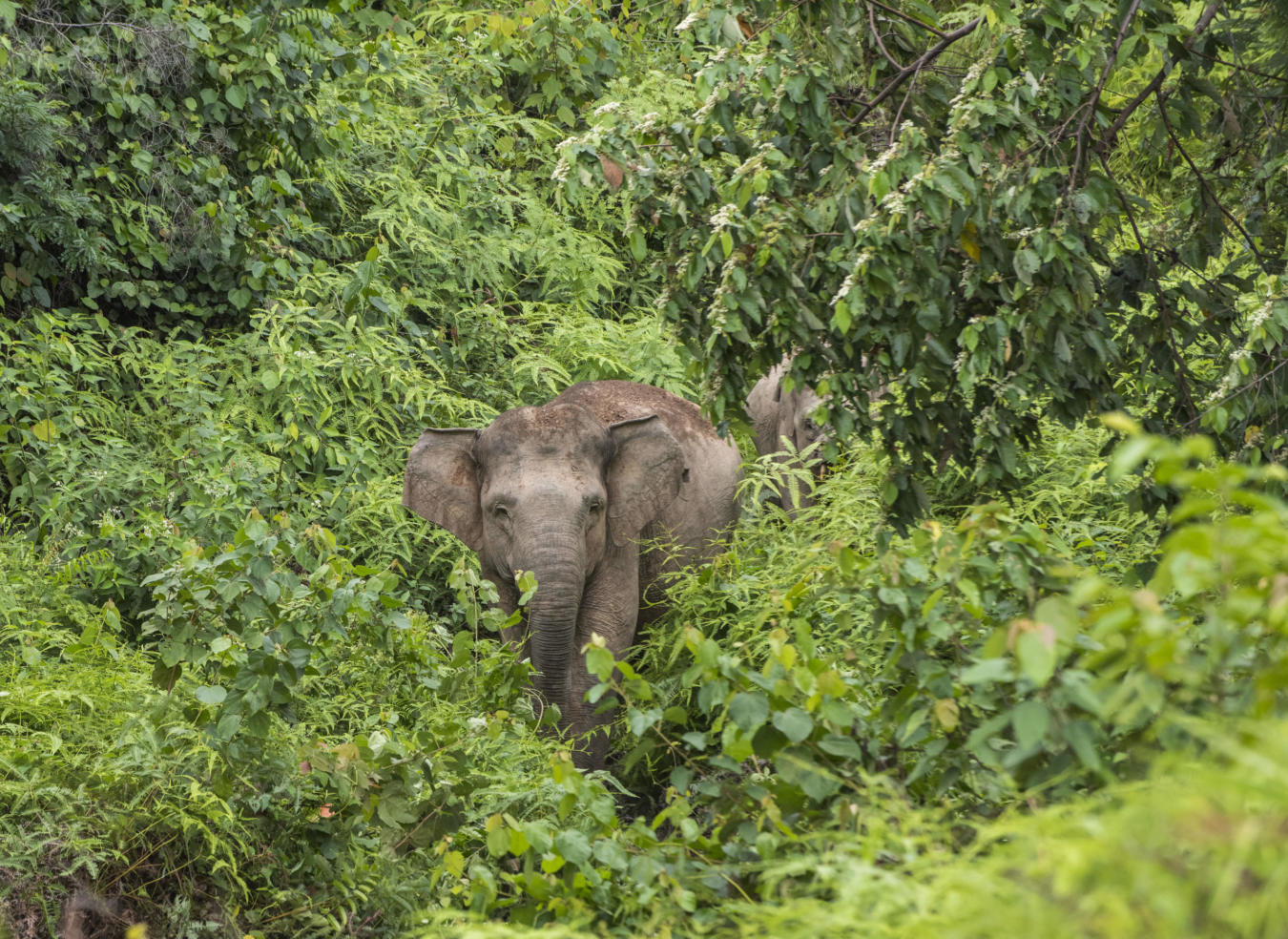 The Sumatran Elephant is the smallest sub-species of the Asian Elephant and is listed by the IUCN as Critically Endangered. © Daniel Rosengren

That is one crazy story! Do you have the feeling that your pictures make a difference in conservation?

Daniel: Absolutely. These days so much is about images, especially on social media, if you don’t have an image, you don’t really catch people’s attention. This old cliche that picture says more than 1000 words. It’s really true.

I have an example of when my photos had a direct impact on protecting an area. Some of the photos that I took during that flight in Guyana that I talked about before, well, the reason we were in that area was to map out illegal gold mining in the Park. Illegal gold mining is actually really quite bad. Not only do the miners cut down forests and destroy the ground, but they also use mercury, a dangerous poison with serious impacts to people and wildlife, to extract the gold.

About six months after that flight, I was told that local people and national park authorities had been telling country authorities about the illegal mining problem for 5-6 years but with no results. Then they made a report with my flight photos included. The report went straight up instantly to the president of the country. He said this cannot happen and sent people there to stop the destruction. It feels very good to have both protected this beautiful, amazing National Park and also the people living near it. 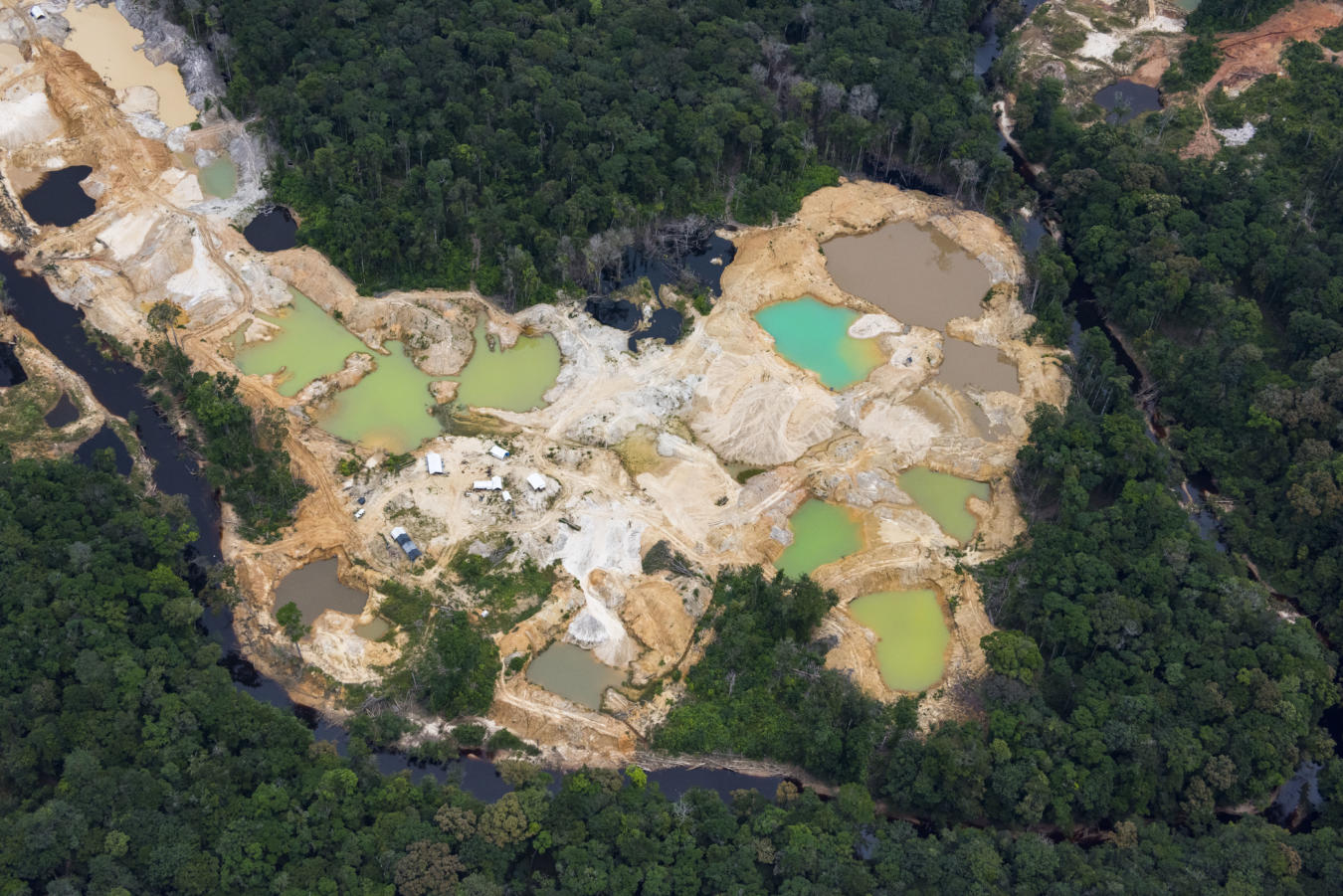 Do you also take pictures of people near the FZS project areas?

Daniel: Yes, that’s a very important part of, of my job too. Partly to show what our staff is doing on the ground there, but also to show the life in the villages around the protected areas.

And how do people react when you come there with your camera and say, ‘okay, I'm going to take a picture of you now?’

Daniel: I often think that this will be intimidating to them, and that I am kind of disturbing them. But it’s actually usually the complete opposite. They’re very proud to be photographed. And if I missed someone, they will make sure that I will take photos of them too. 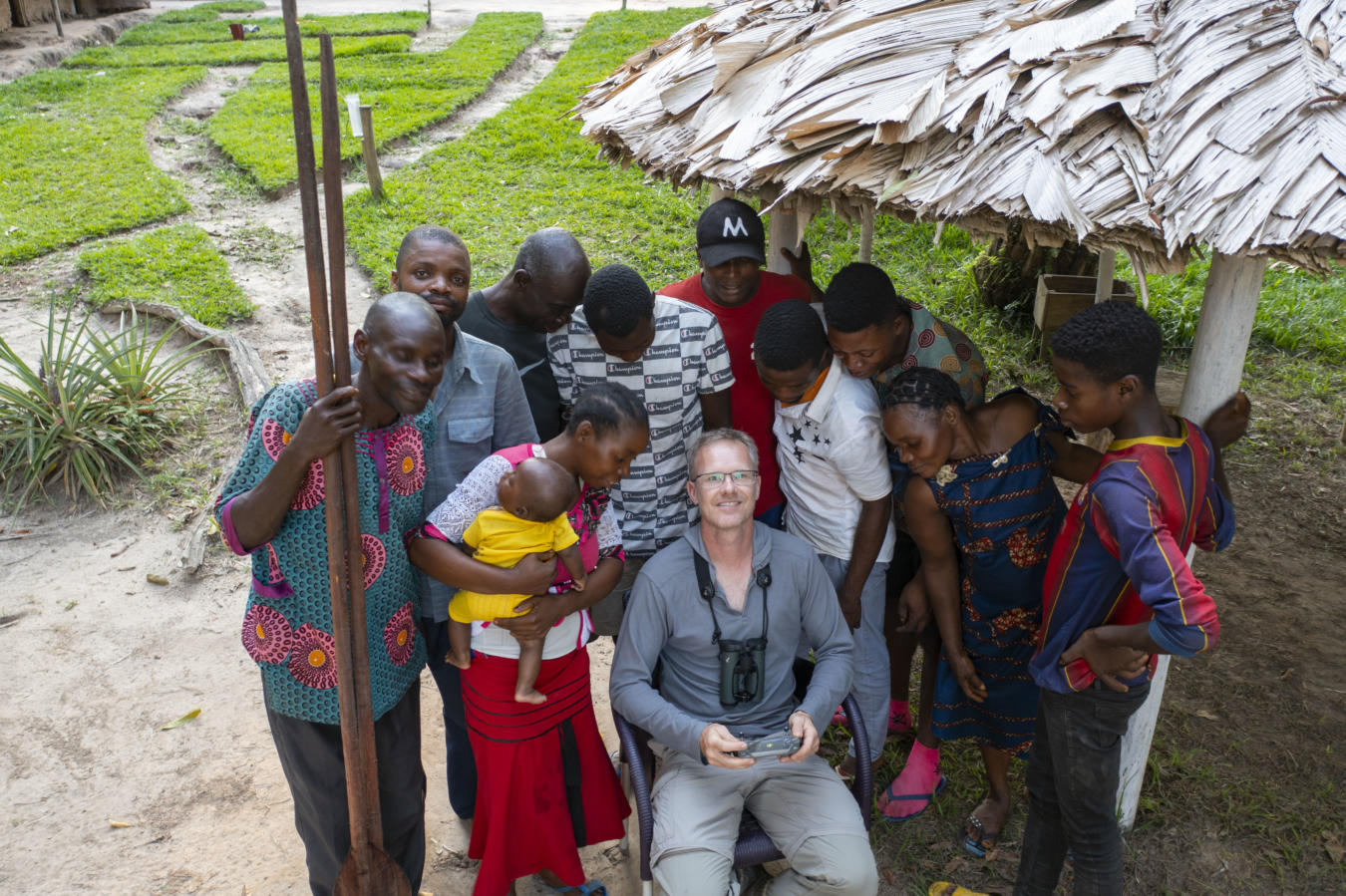 Do you have favorite subjects that you like to photograph?

Daniel: I like birds very much because they are often very pretty and they like posing. But I also like cats, like lions. I worked with lions in the Serengeti for five years and learned that cats have very expressive faces and eyes and strong eyes. And like I said before, eyes are very important.

I also like being in the rainforest. It’s very exciting going at night with a flashlight because normally the first thing you see is the eye shine from animals, reflecting back from the light. I’ve also learned to kind of tell what animal it is just seeing this I shine like a spider, for example, they’ll have a little white twinkle like a star, while larger animals like cats have an incredibly strong green light. And if you see an antelope, you usually just see one big greenish-white eye, because they have eyes on separate sides of the head. 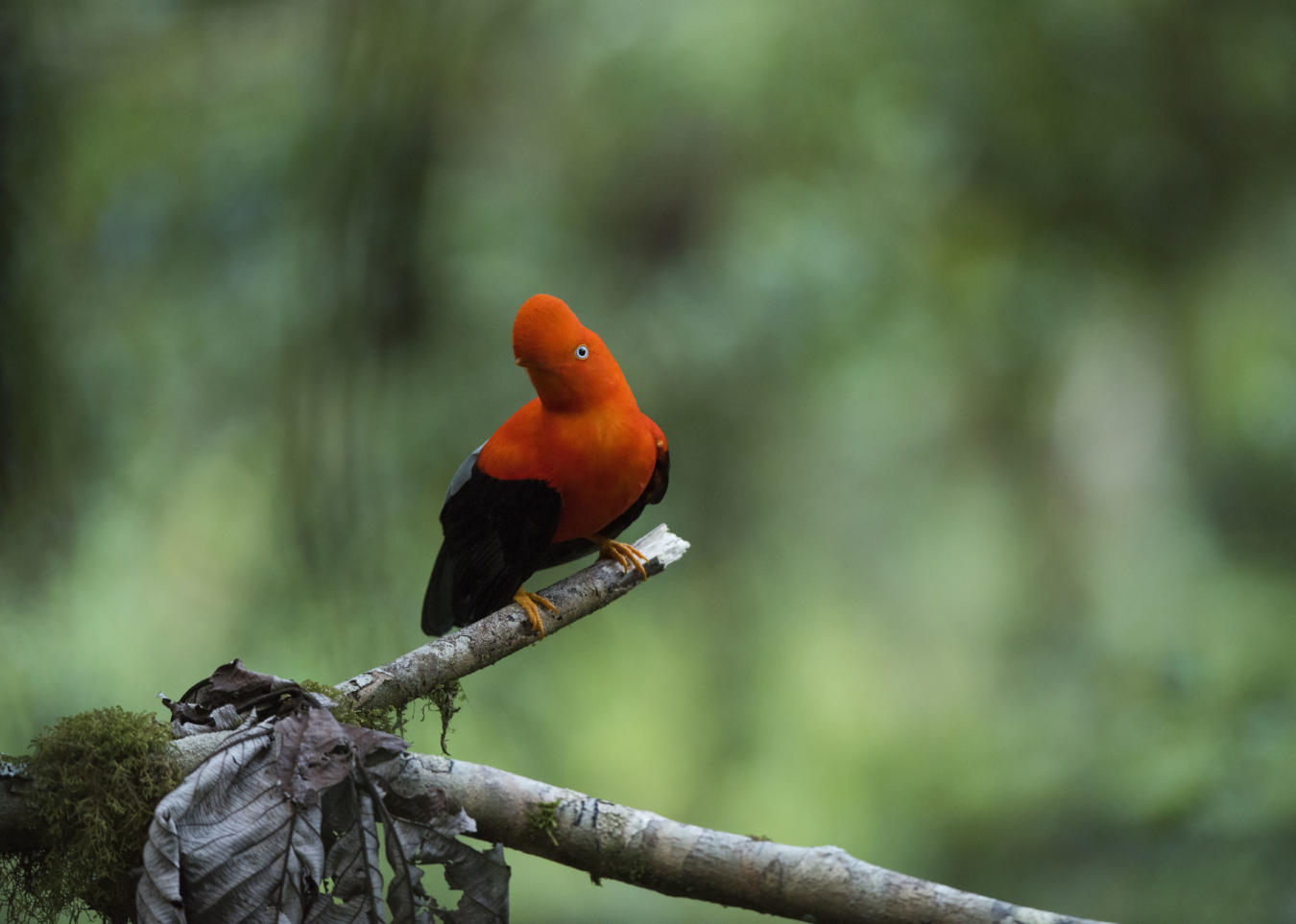 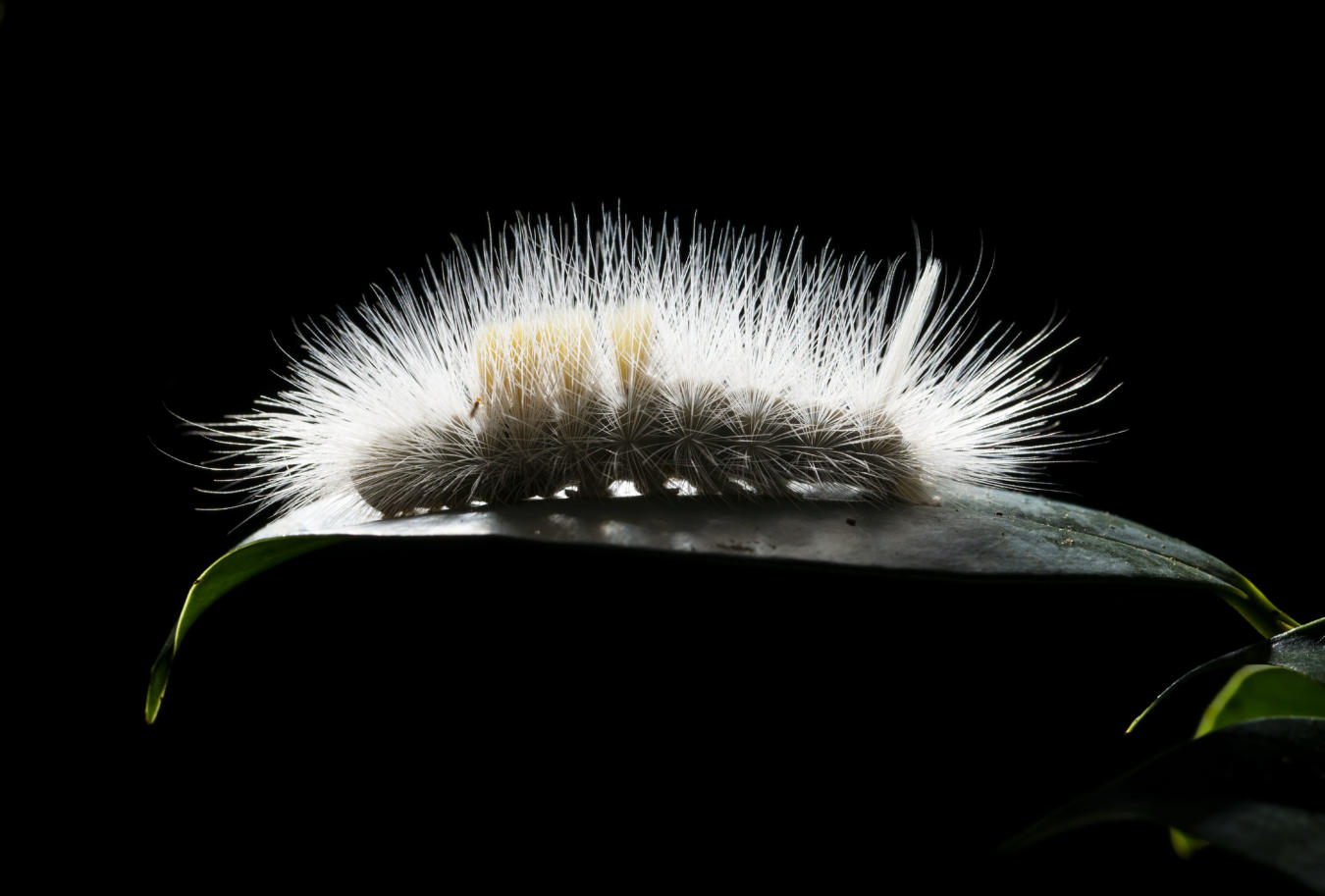 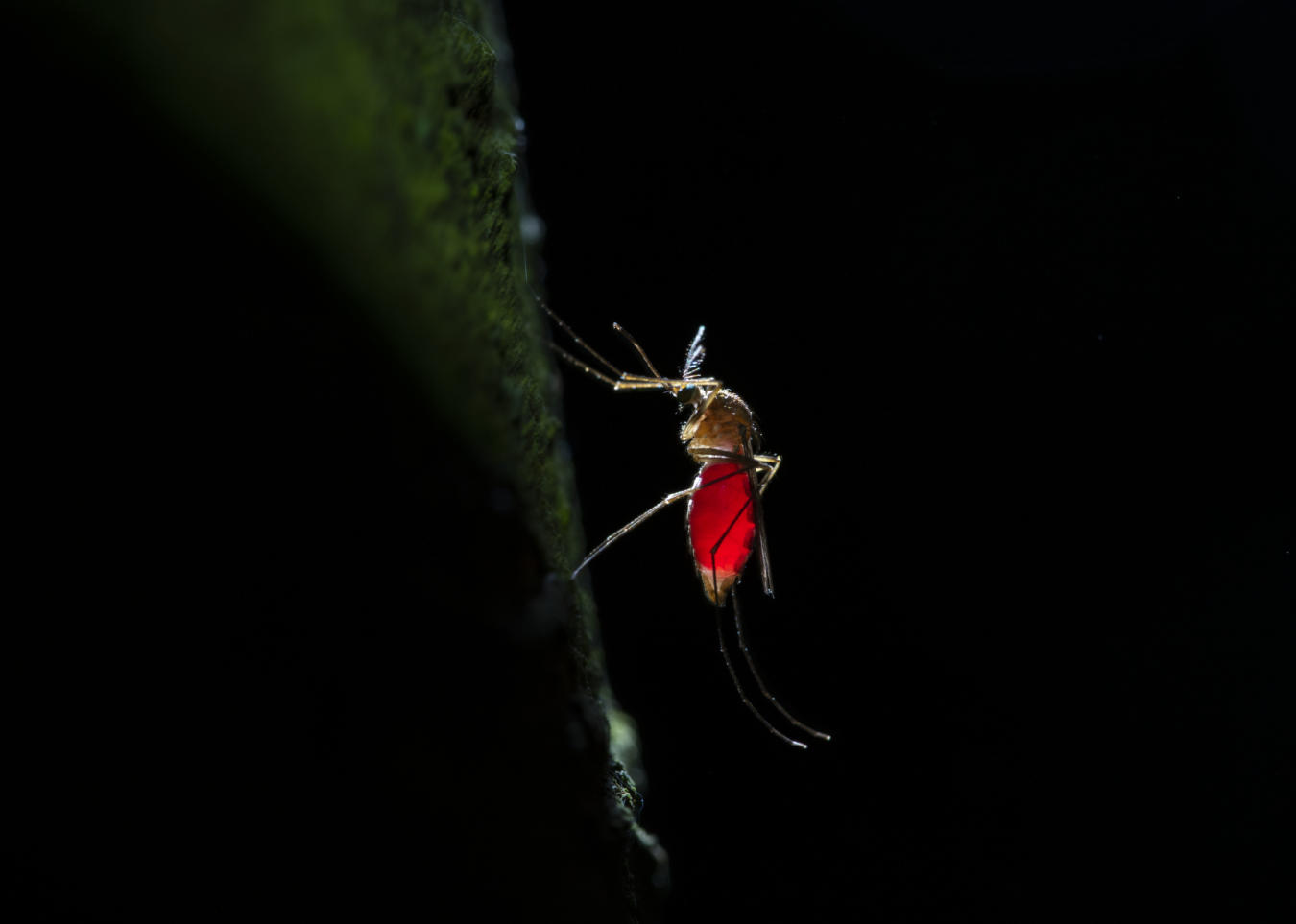 Do you have you anything still on your bucket list any animal you would love to take a picture of but weren't able to yet?

Daniel: Yeah, photographing a tiger would be the dream. We have some in our project area in Sumatra, but it’s also in the rainforest settings very difficult to actually see them and be close enough to take a photo.

Daniel: Be respectful of what you’re taking photos and not disturb the animals. If you do disturb them, if they do feel fear, you’ll see it in the photo. If they’re scared, they will walk away or run away or look scared and so that the less you can disturb them or intimidate them, the more natural looking photos you will get. It helps you to not be too invasive with your camera. 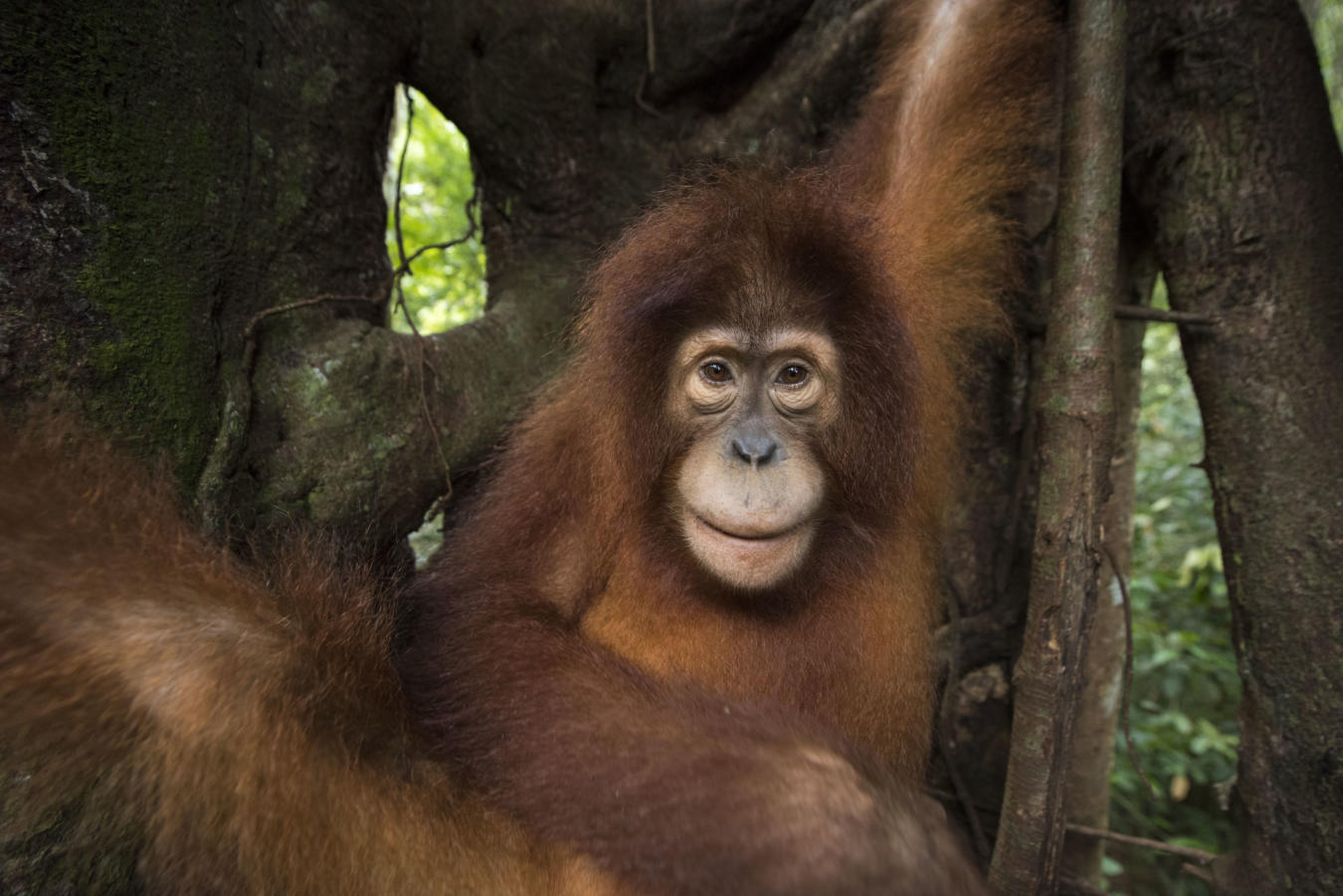