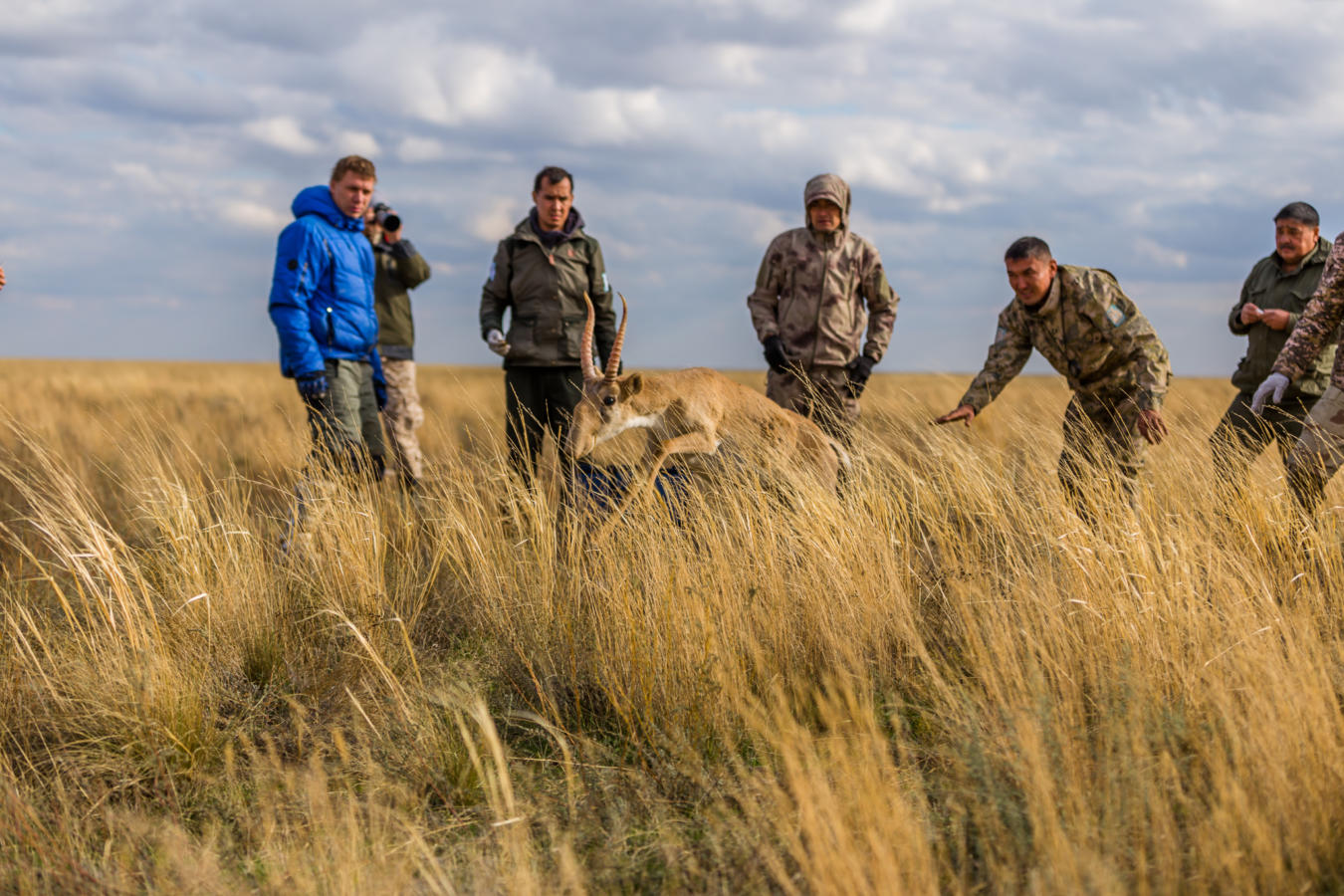 Since 2009 FZS partner the Association for the Conservation of Biodiversity of Kazakhstan (ACBK) has been collecting tracking data to help better understand the movement patterns of the critically endangered saiga antelope. Collars fitted this year will help to study the migration behaviour of a growing saiga population and guide their protection.

In September and October this year satellite collars were fitted on 24 saiga antelope from Kazakhstan’s three known populations in the west, centre and north of the country: the Ustyurt, Betpak Dala, and the Ural. The collaring operation was led by an FZS partner, the Association for the Conservation of Biodiversity of Kazakhstan (ACBK), using a capture method developed in Kazakhstan. The team also collared saigas from an unidentified population in the west of the country and collected genetic samples from these animals.

A picture of migration

The historical range of the Kazakh saiga antelope is twice the size of Germany – a massive 700,000 km². To protect the critically endangered antelope and its vast steppe habitat, conservationists need reliable information at their fingertips – for this, tracking data is a crucial tool. Since 2009, 180 saiga antelope have been successfully fitted with satellite transmitters. The tracking data collected has enabled a detailed understanding of the home ranges of the three saiga populations in Kazakhstan and a better understanding of their migration routes and patterns. The saiga location data also helps protected area staff to closely monitor the herds and combat poaching, and to pinpoint possible threats to their seasonal movements. 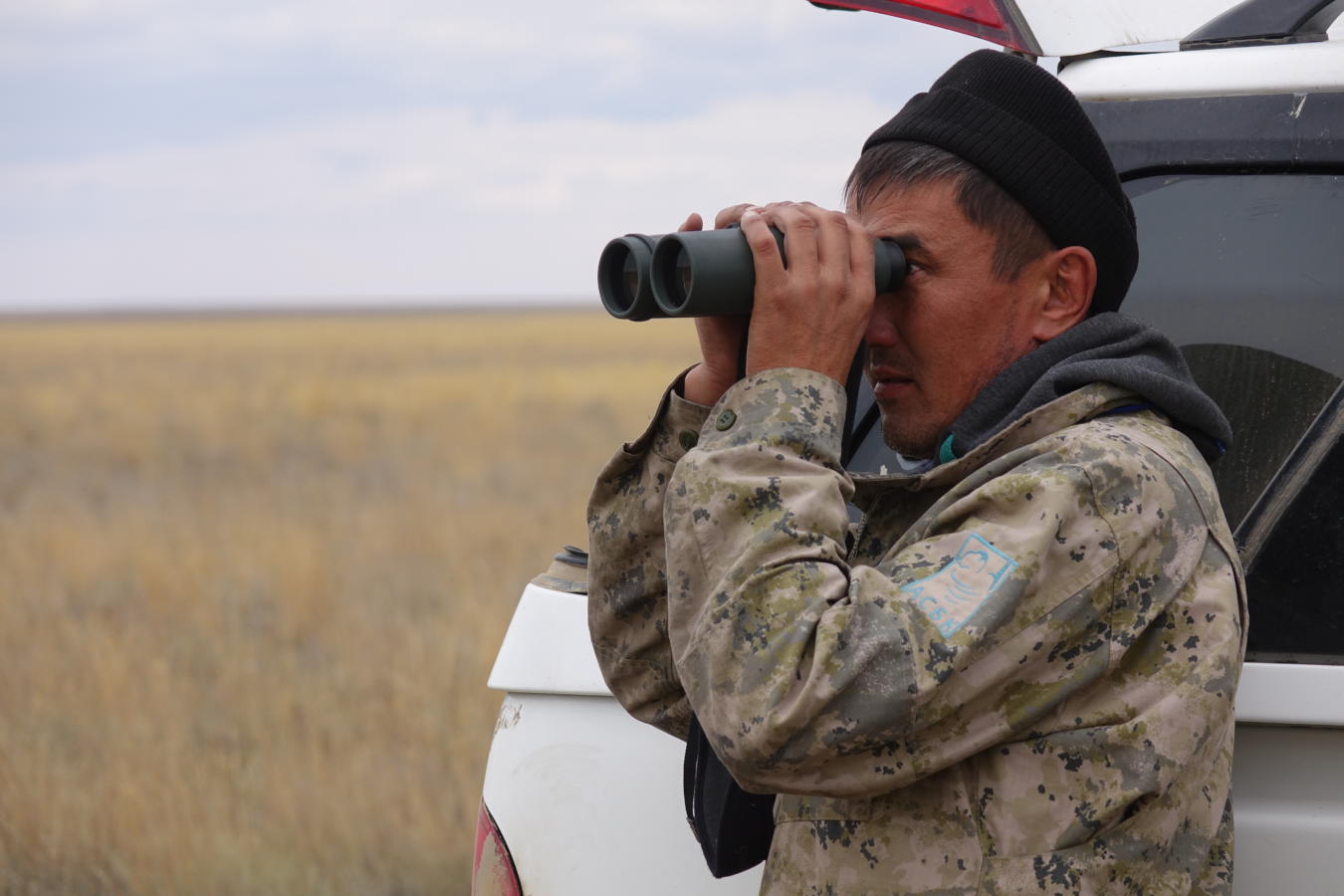 The ACBK team search for the herds during the collaring operation. ©ACBK 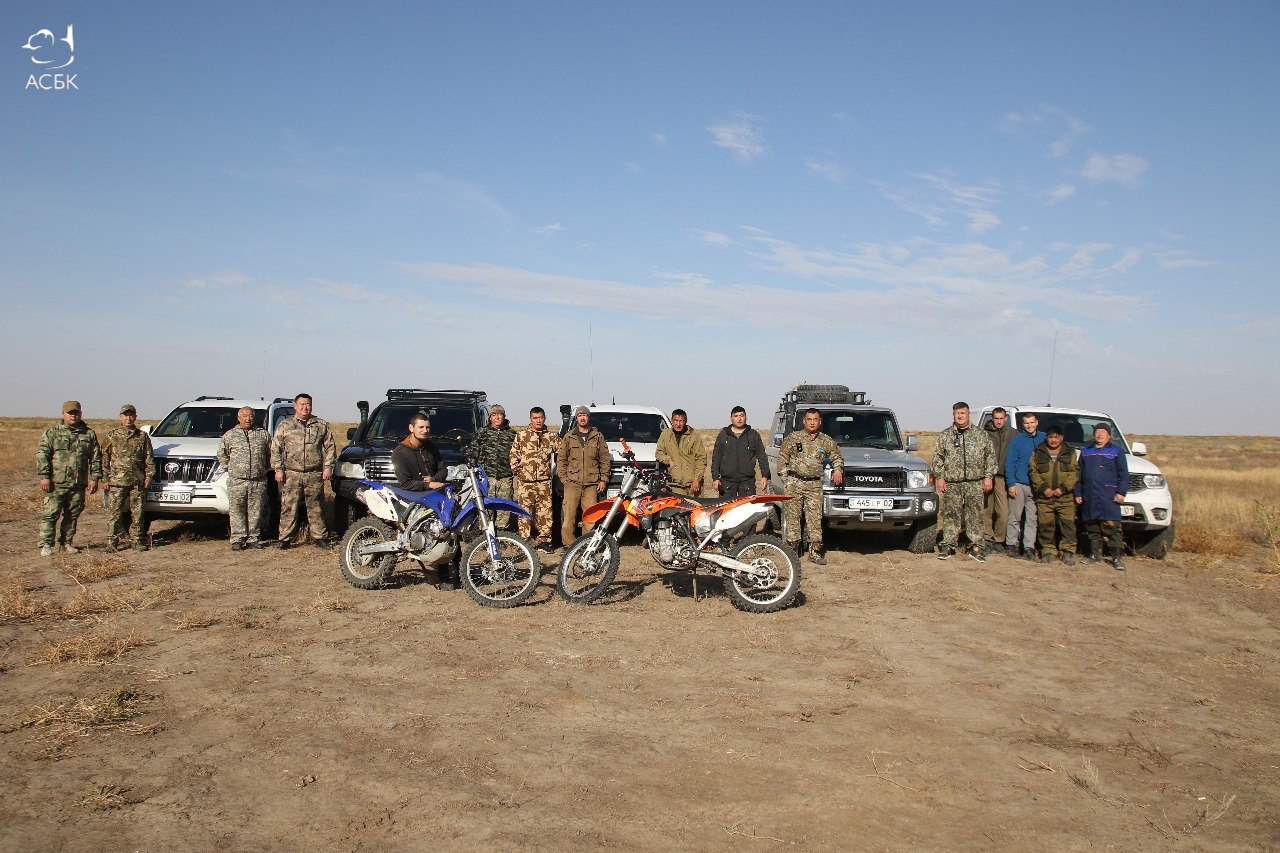 The capture team in the field during this year's saiga antelope collaring. ©ACBK 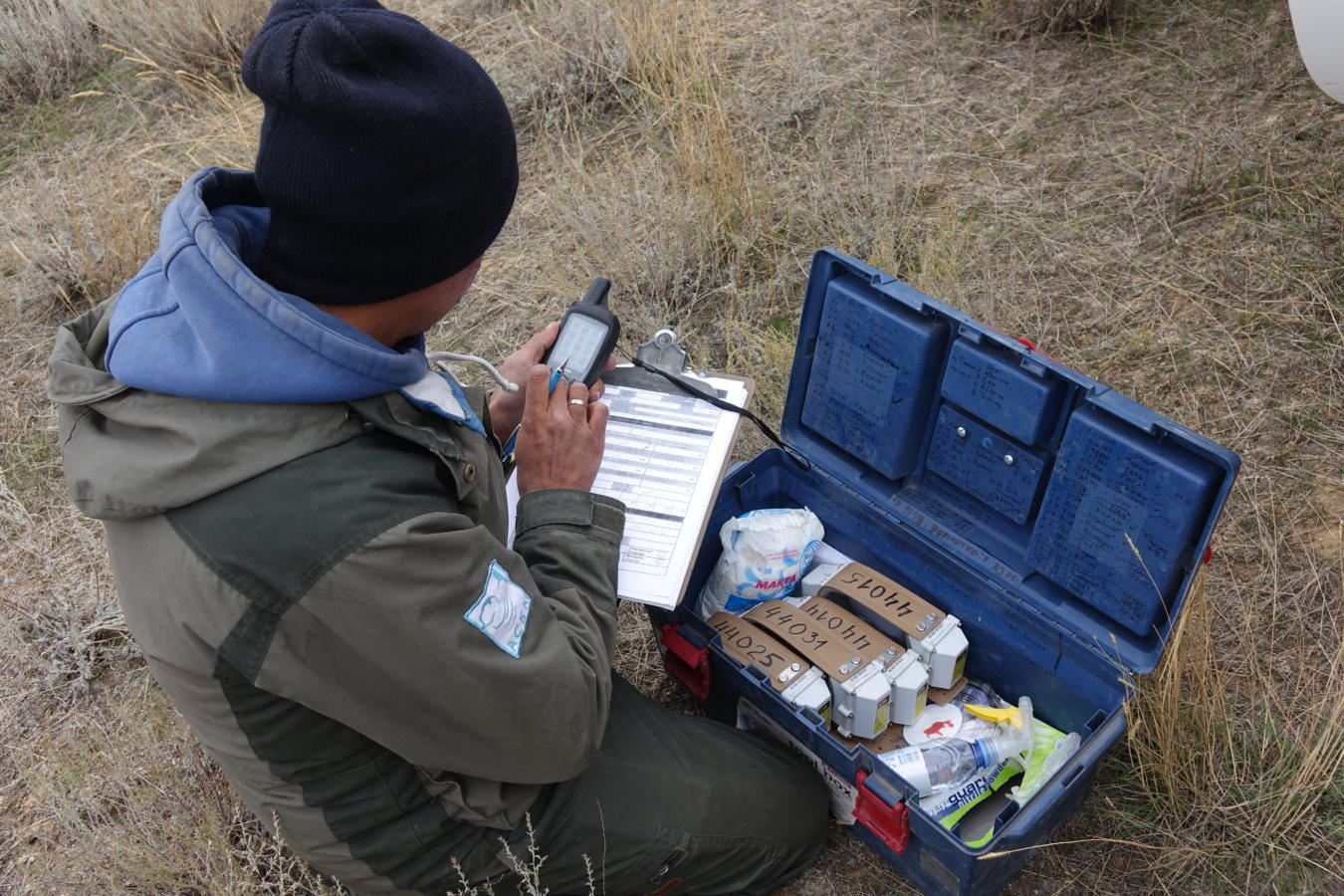 Bolstered anti-poaching efforts by the Government of Kazakhstan, together with various conservation measures, have allowed saiga antelope numbers to bounce back from the critical low seen after a 2015 die-off. The results of the most recent aerial survey released this summer have shown a boom in the population – with an estimated 842,000 saiga now present in Kazakhstan, up from 334,400 in 2019. 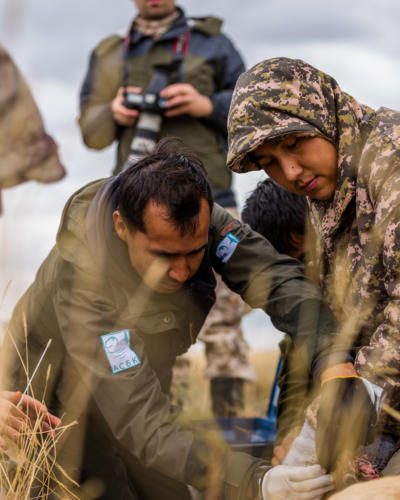 We anticipate that the larger herds will need to move further to find forage and water. Roughly 2.4 million hectares of new protected areas and ecological corridors have already been created, justified by telemetry data from collared saiga. Ongoing data collection will allow us to piece together how saiga move in herds of larger numbers, this in turn will help to protect them better and advocate for more land to be managed for their conservation in order to accommodate this new movement.

Watch a curious saiga antelope on the Ustyurt Plateau in Western Kazakhstan: 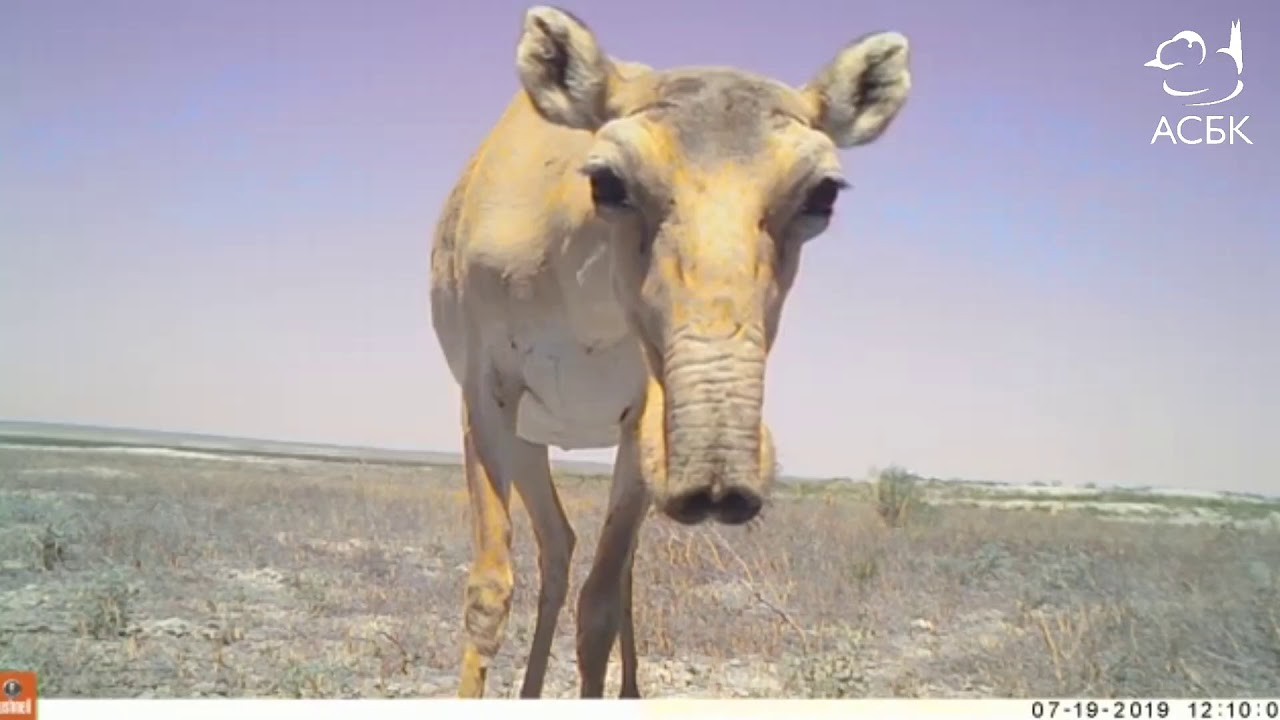 The technique used to capture the saiga antelope was developed on the Kazakh Steppe. Once the herds are located, the experienced capture team will divide up, with some getting ahead of the animals and concealing themselves in the grass with the capture net spread between them. They then lie in wait while a professional motorcycle rider herds a single animal forwards into the net. The operation is high-paced and requires careful planning and precision.

Blood samples are gathered from the antelopes while the collars are being fitted. This is part of ongoing work to monitor saiga health in order to further unpick the mystery of the 2015 mass die-off and help predict future outbreaks of the bacterial infection that caused it. The capture, sample collection, and collar fitting have to be completed in under four minutes to limit strain on the animals. Autumn is the best time for the collaring in order to avoid additional stressors from the temperature extremes of summer and winter.

Photos © Association for the Conservation of Biodiversity of Kazakhstan, Albert Salemgareyev/ACBK, Daniel Rosengren