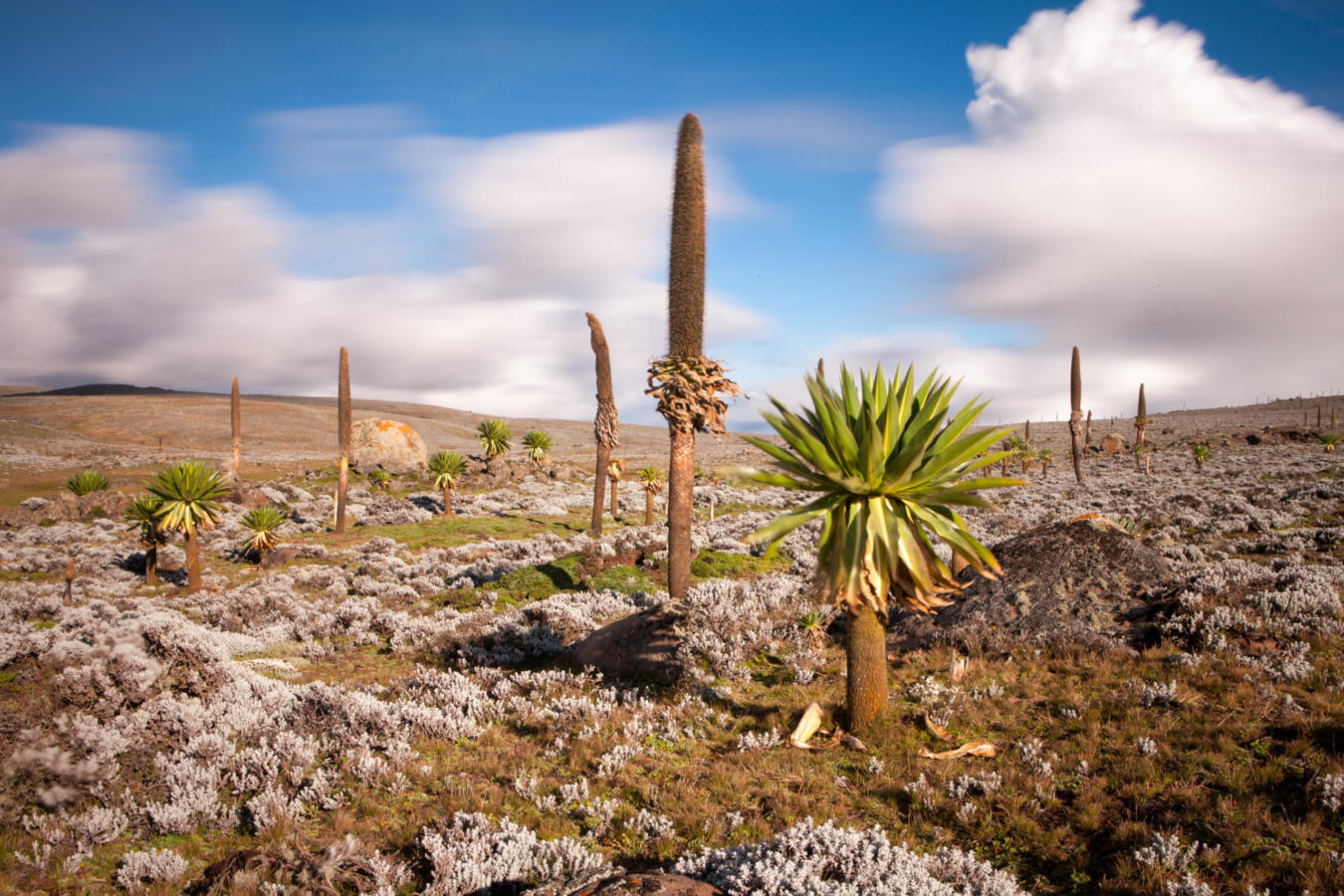 One Park, Many Worlds

The Bale Mountains National Park includes the largest area of afro-alpine habitat in Africa and has the greatest number of endemic species in Ethiopia. The swamps in this spectacular landscape regulate the flow of water to rivers that rise in the Park. These rivers provide a critical source of water to over 30 million people downstream in Ethiopia, Somalia, and Kenya.

Tulu Dimtu, at 4,377 meters, towers over the vast plateau and a network of broad valleys. Up here the air is thin and the sun fierce, but at night a sparkling frost can cover the ground. To the north, there are hagenia/juniper woodlands and grasslands. To the south, a dramatic descent of over 2,000 meters takes you swiftly down deep into the humid heat of the moist tropical forest of Harenna – the largest cloud forest in the country. Here, black-maned lions and giant forest hogs live in the dense vegetation. This diversity of habitats underpins an impressive array of plants and animals including endemic species such as the Ethiopian wolf, mountain nyala, and the entire global populations of the Bale monkey and giant molerat. 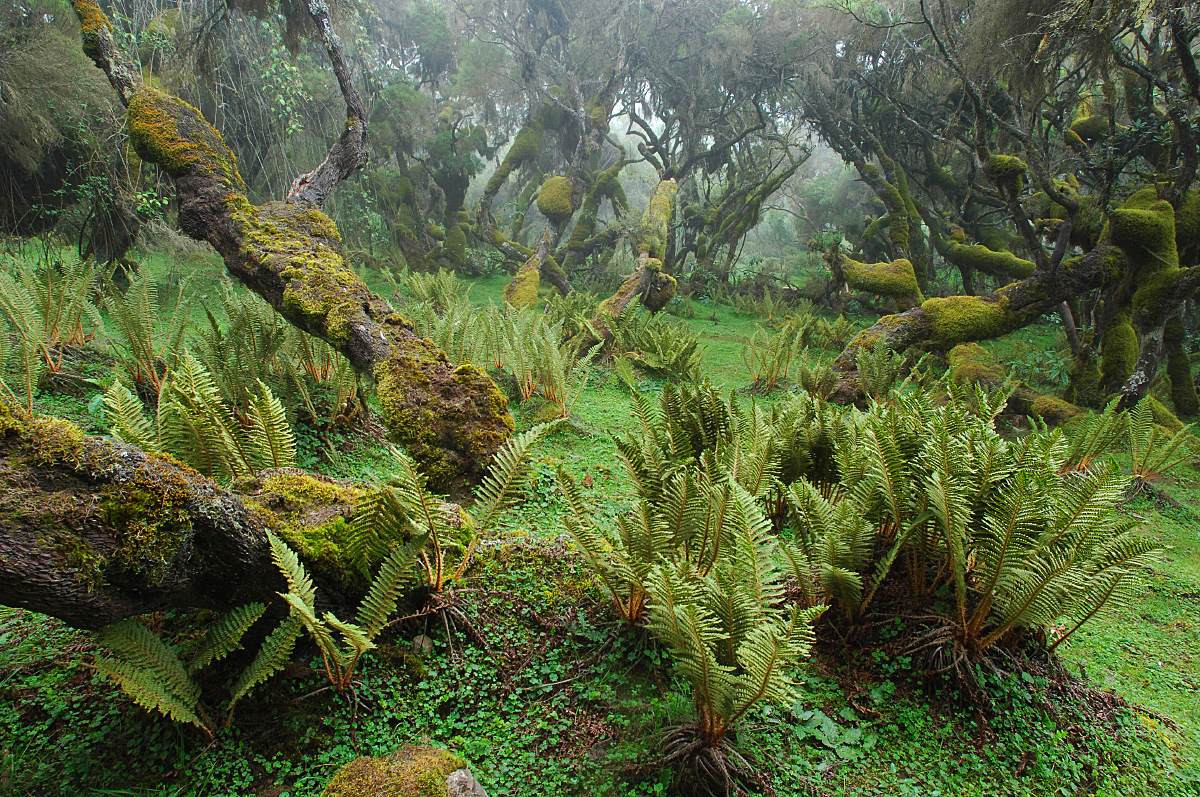 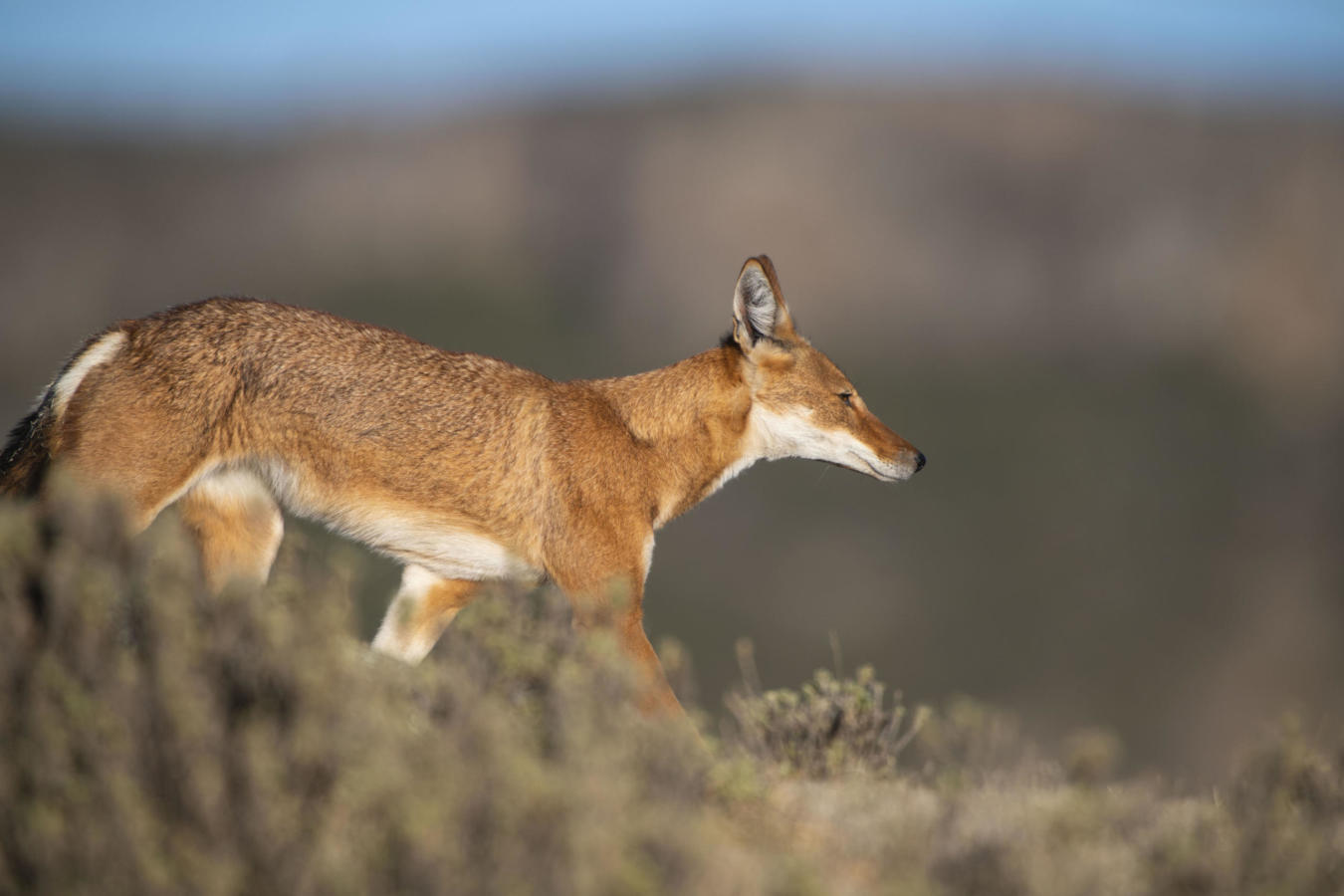 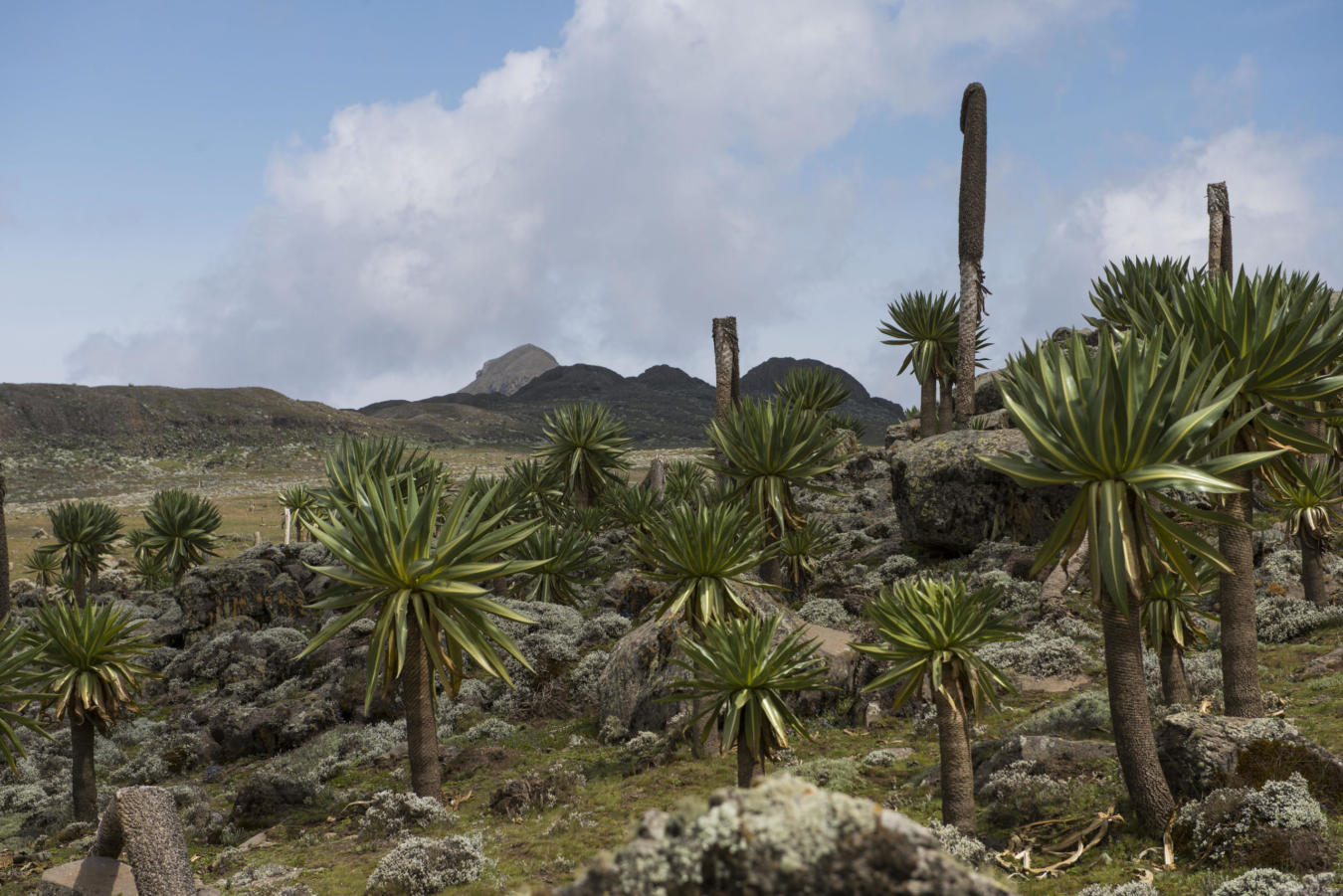 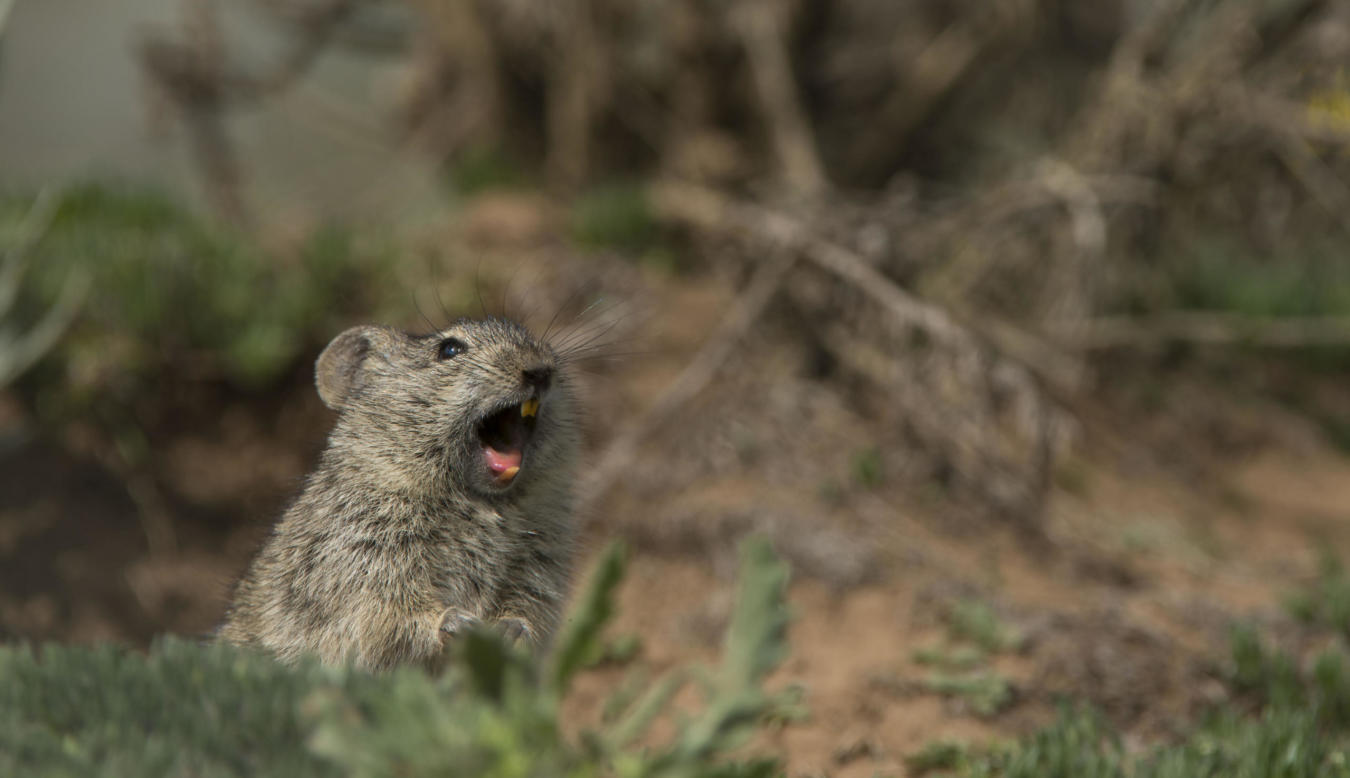 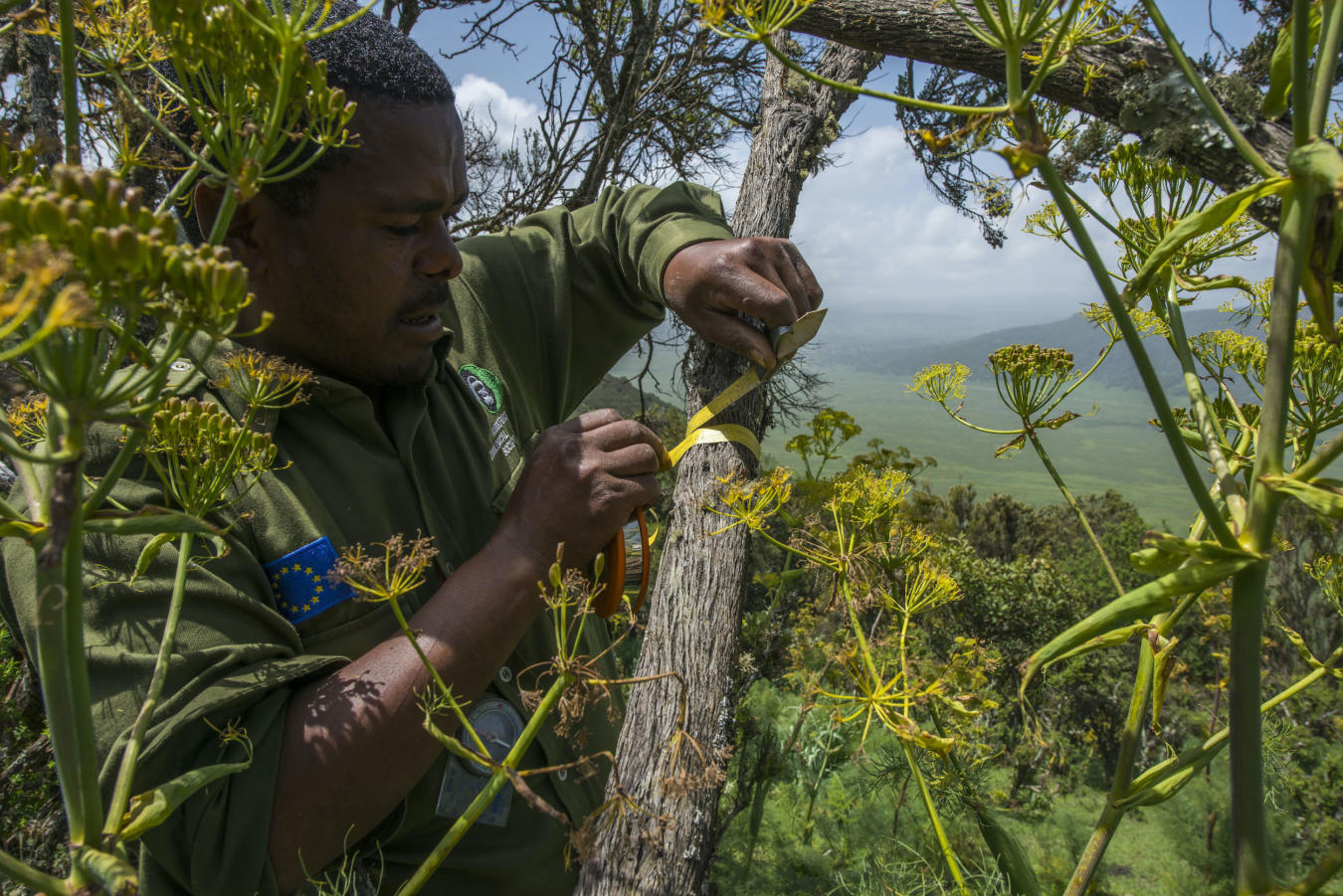 FZS is cooperating with ecologists in Bale Mountains National Park, Ethiopia. These ecologists are documenting changes in the park. They record data on plants, signs of fire wood collection, signs of domestic animal grazing and other things. © FZS/Daniel Rosengren 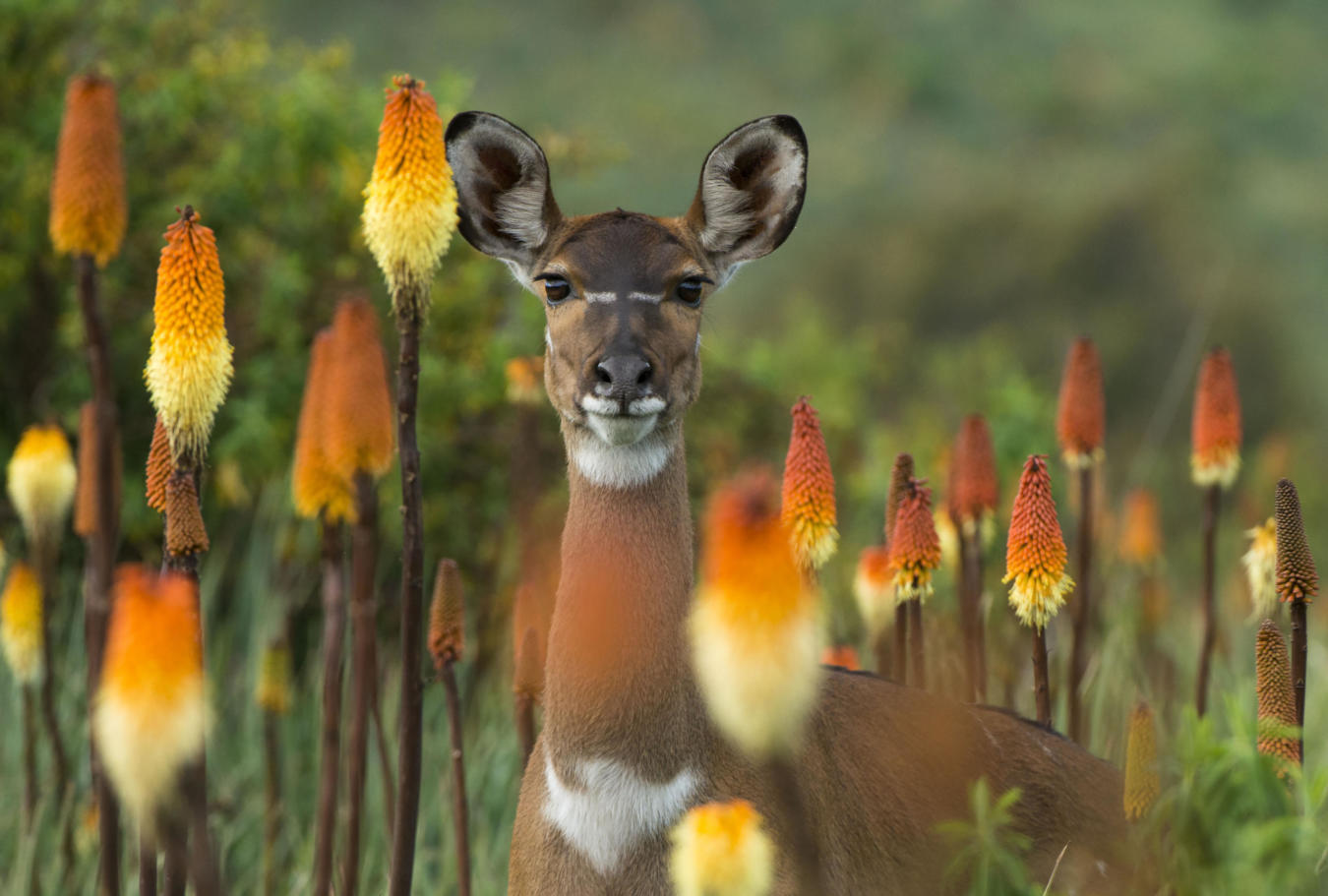 A female mountain nyala, an animal endemic to Ethiopia, and Red-hot Poker (Kniphofia foliosa) plants in the background. © FZS/Daniel Rosengren 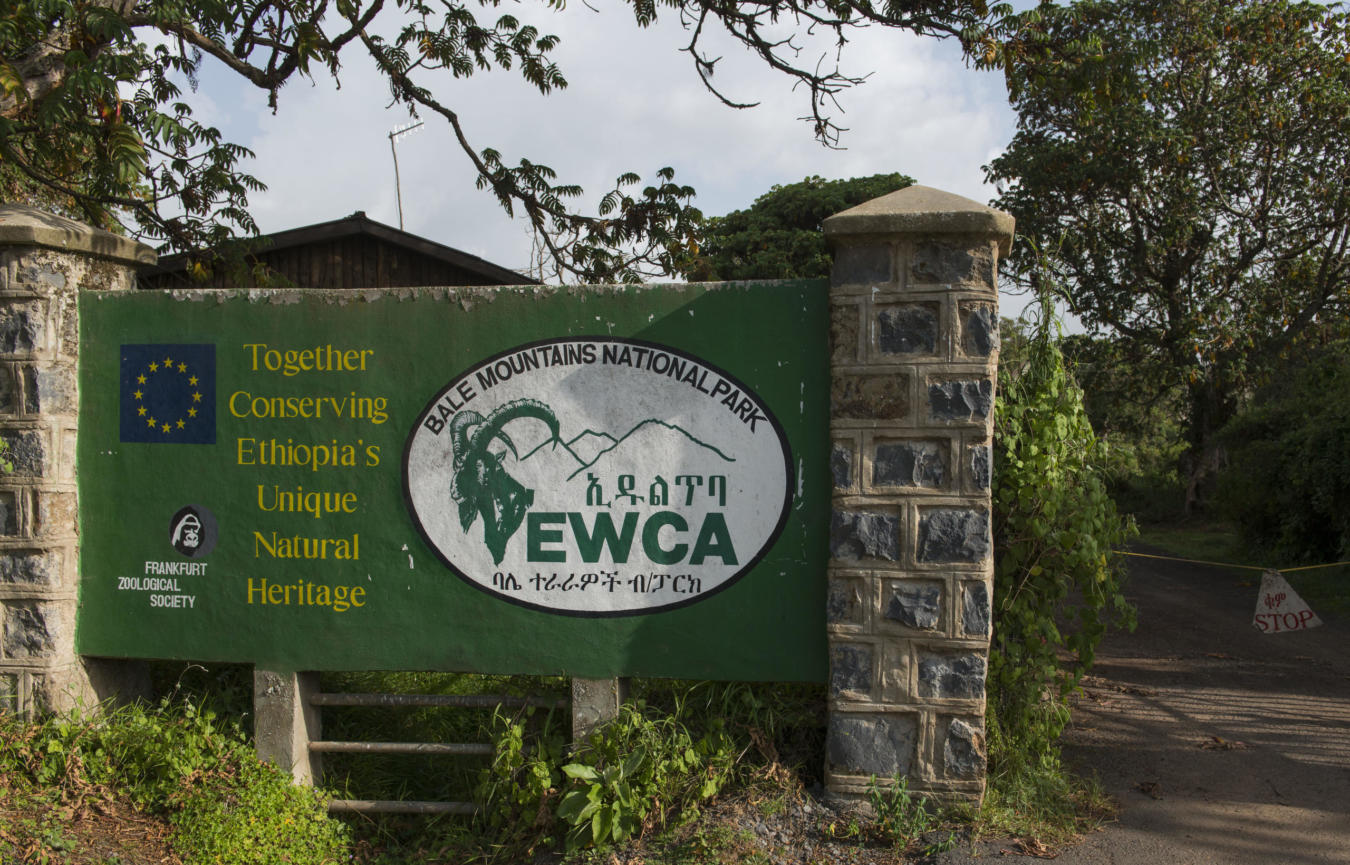 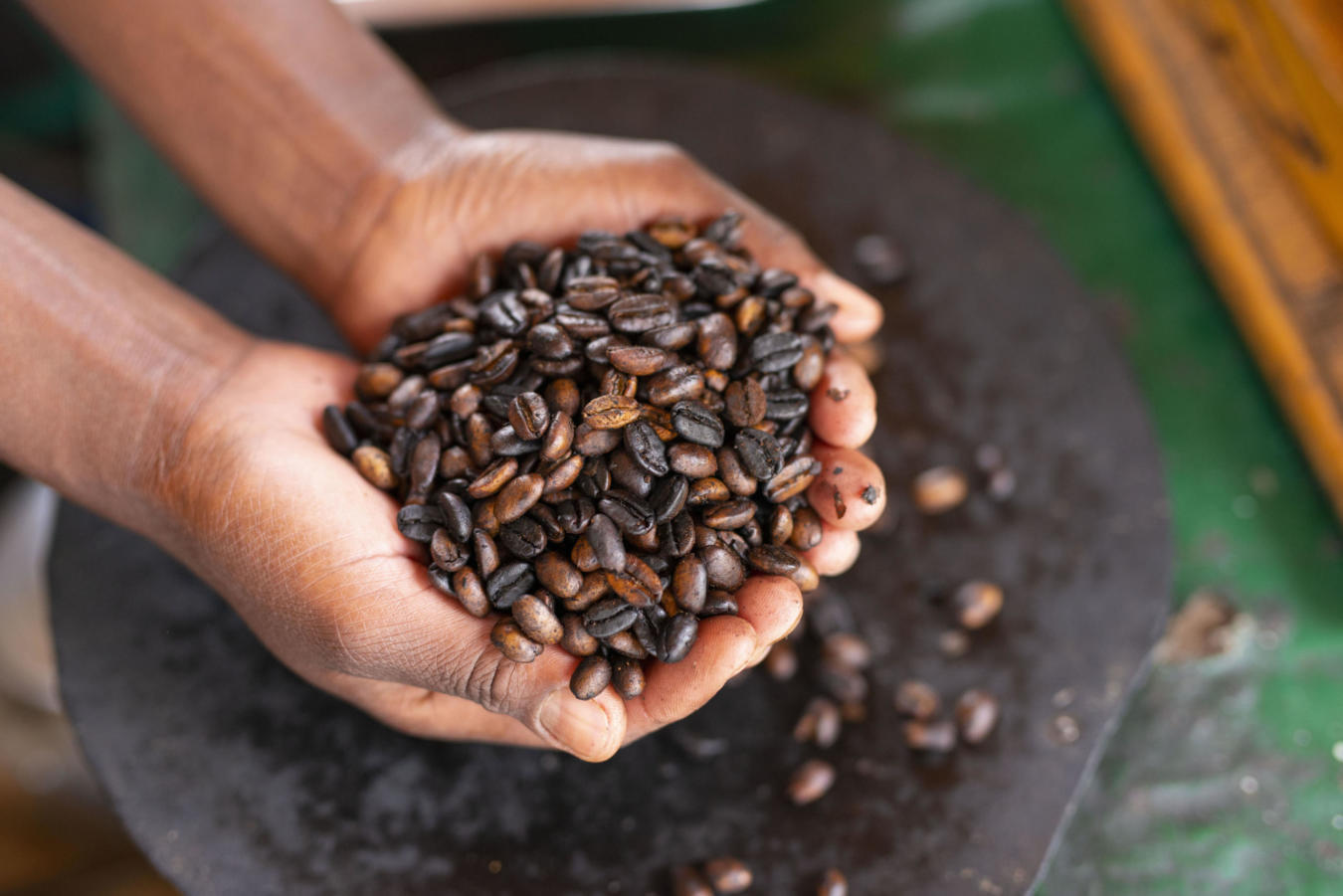 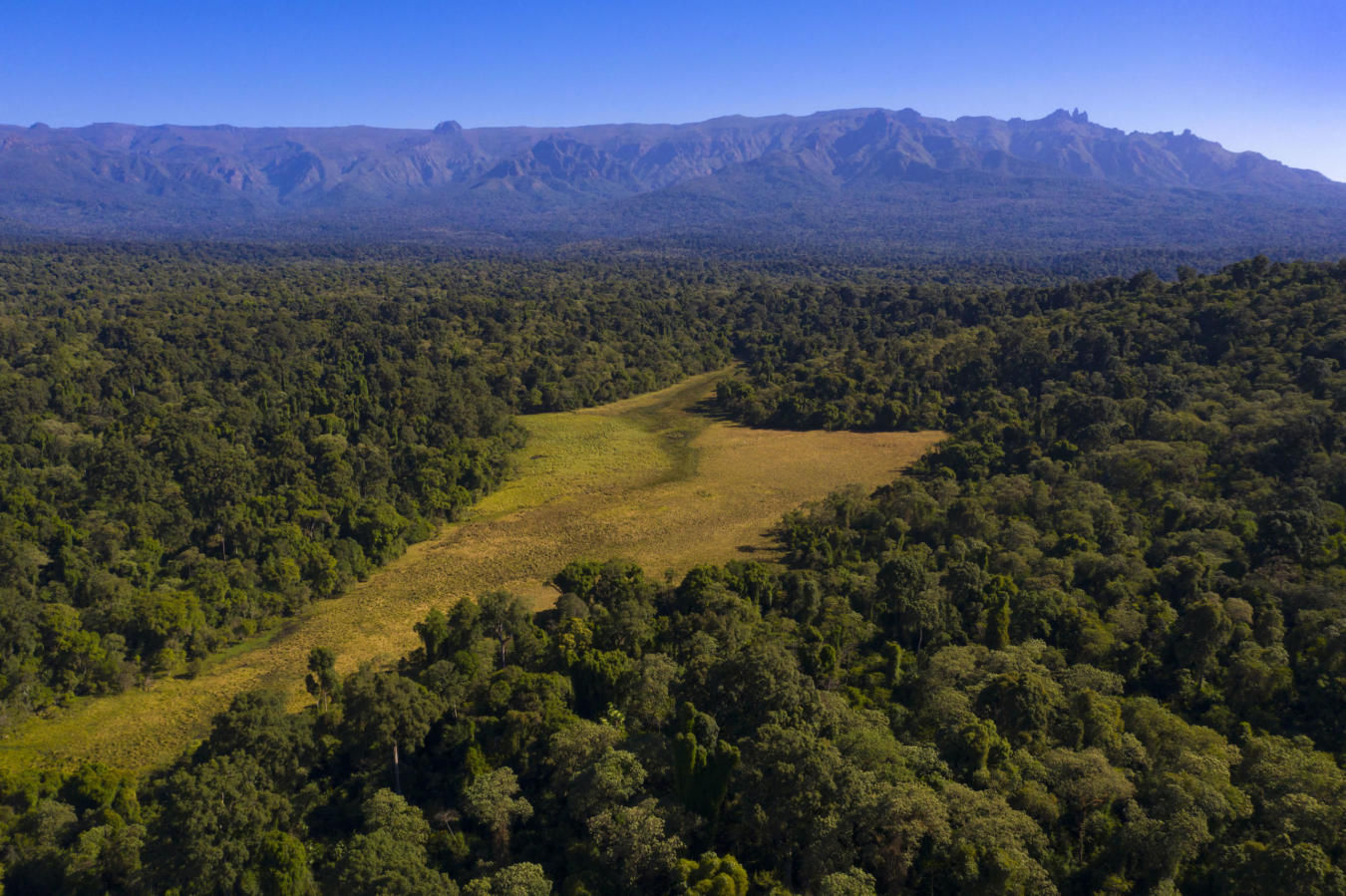 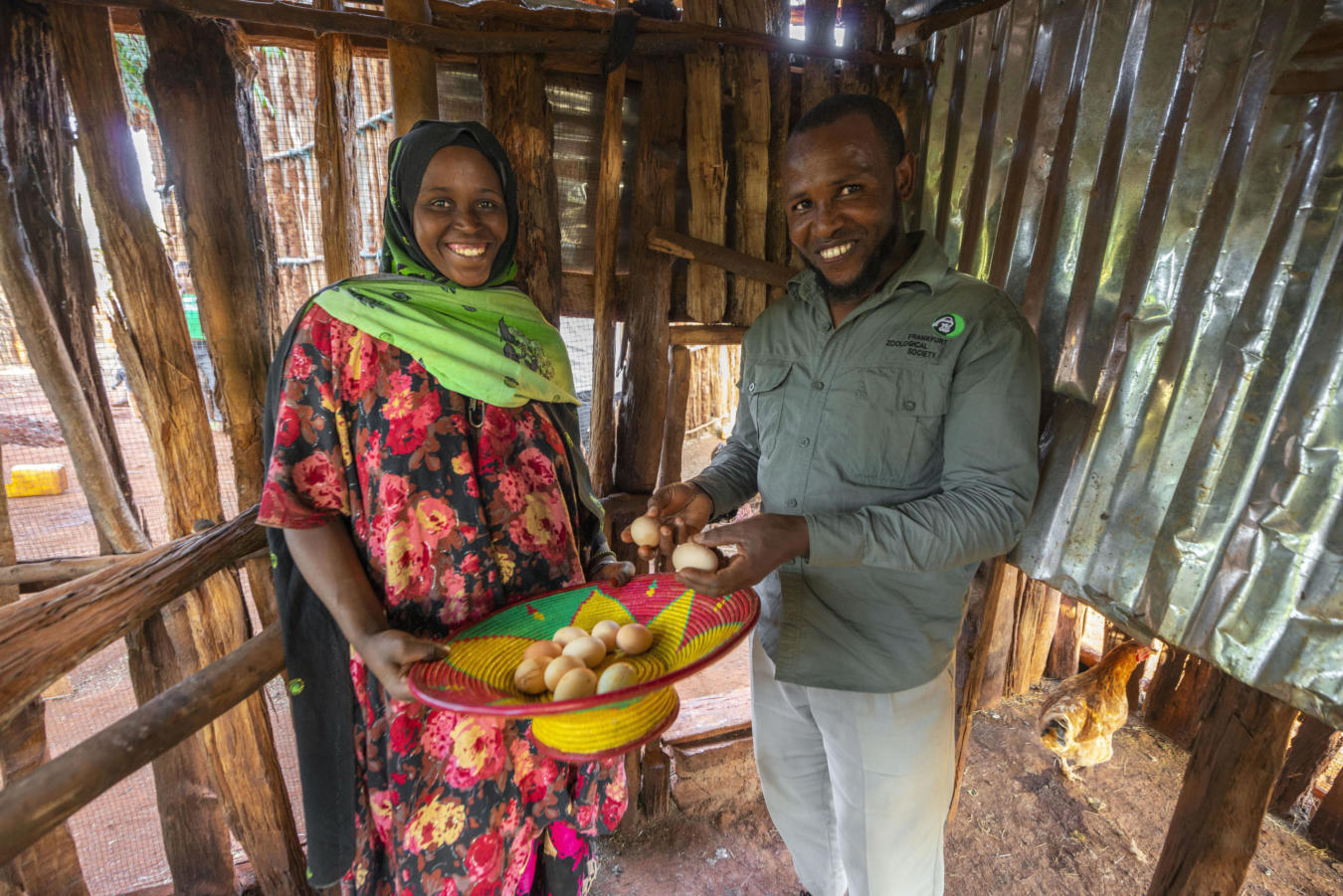 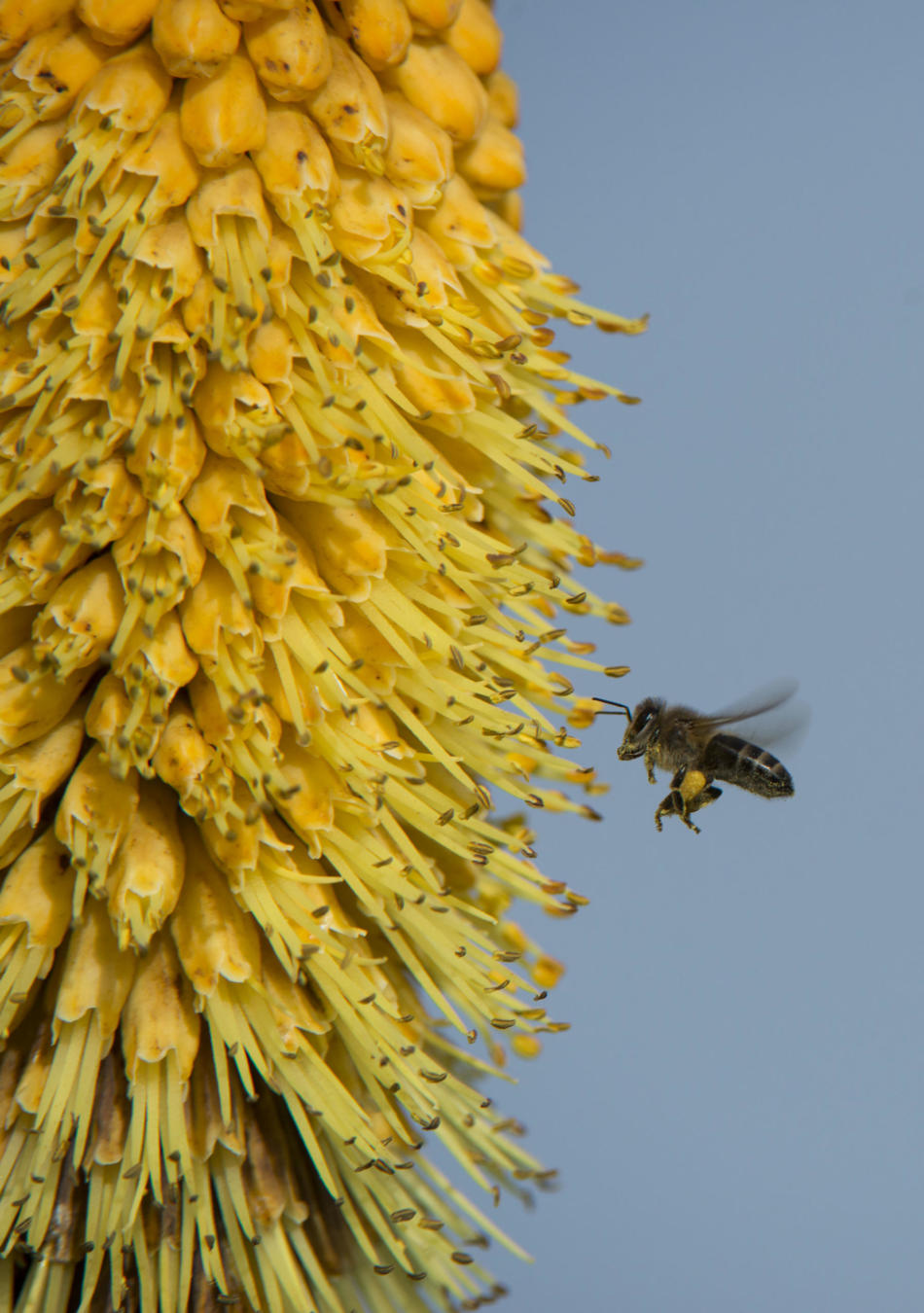 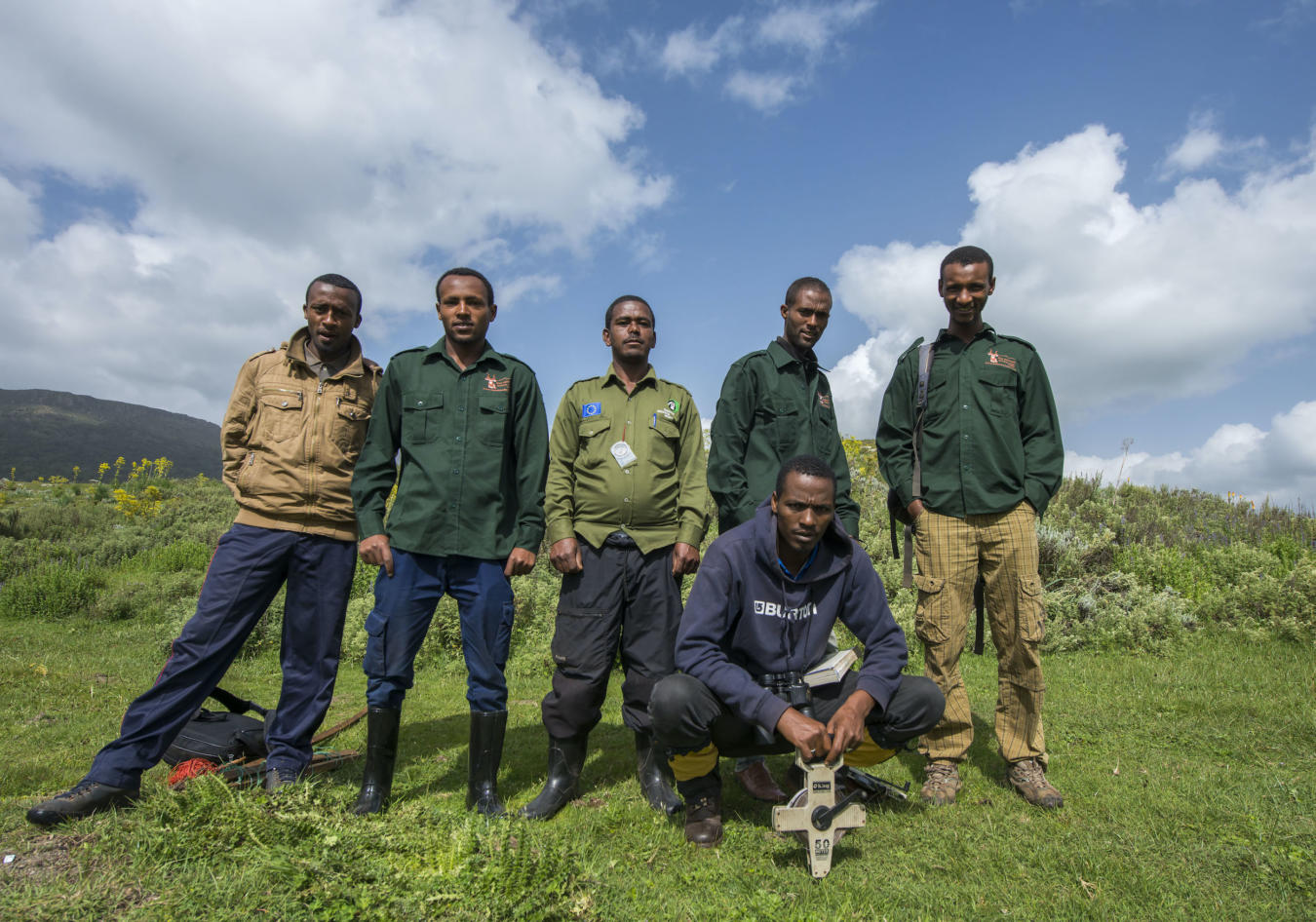 FZS is cooperating with ecologists in Bale Mountains NP, Ethiopia. These ecologists are documenting changes in the park. They take data on plants, signs of firewood collection, signs of domestic animal grazing, and other things. © FZS/Daniel Rosengren

Ecological Threat Monitoring is a program designed to monitor the status of the key ecosystem components of the Bale Mountains National Park (BMNP) during both wet and dry seasons. We employ para-ecologists, who are locally trained field data collectors, to support the BMNP by carrying out this monitoring and surveying using established monitoring protocols.
Their work includes:

The Bale Mountains National Park (BMNP) employs rangers who play an important role in protecting the Park from illegal activities such as grazing and firewood extraction. To aid them in conducting their work, we supply field equipment such as binoculars, uniforms, tents, and vehicles, as well as regular training. We also provide technical advice to the BMNP management as well as support for the construction and maintenance of ranger outposts.

With spectacular scenery and the opportunity to see many endemic species, Bale Mountains National Park has great potential for tourism revenue and for this to be shared with the community. Currently, we are facilitating tourism management training for National Park staff as well as local tourism service providers who supply guides, sustainable firewood, pack horses, and cooks. We are also working with the Park to establish concession agreements that may be used for investors in tourism infrastructure. Built into these agreements are ways to maximize benefit flow to park-adjacent communities and conservation efforts.

We support community-based organizations (CBOs) to develop participatory forest management plans to reduce deforestation and soil erosion in native forests surrounding the Park. This includes developing partnerships between the CBOs and the Oromia Forest and Wildlife Enterprise – which is responsible for regulating and monitoring the sustainable use of the forest. This collaboration helps promote the long-term protection of the forest so that all parties can benefit in the future from the resources that the woodlands provide.

Local farmers and development bodies in the area surrounding the Park face the problem of farming at high altitudes with increasingly erratic rainfall due to climate change. We draw on work done by the Ethiopian Agricultural Research Institute to identify the best crop varieties to use and collaborate with the farmers to develop tailored sustainable farming practices.

Our research demonstrates that livestock grazing in the Park is unsustainable. People take livestock into the Park because of a lack of forage and pastoral land in their home areas. To change this, we are working with park-adjacent community-based organizations on developing Participatory Rangeland Management guidelines. These guidelines outline actions communities will take to improve the productivity of pastoral lands so that they can be used sustainably in the long term.

Linked to this are initiatives to reduce livestock numbers such as introducing cattle breeds that are more productive and encouraging forage production at the homestead. Forage crops such as vetch, alfalfa, cow pea, pigeon pea, and elephant grass are all being grown successfully and reduce the need to take livestock into the Park to graze.

Population health and the environment

We are working with the Bale Zone Health Office to engage with communities to increase awareness and the availability of family planning support. Environmental education is a key feature of these programs and we have been setting up and supporting environmental school clubs and awareness campaigns in the local communities. These initiatives have been very well received and are being expanded to more villages in the area.

A direct link with both health and the environment is the use of open fires in houses without chimneys. We are working with families to find ways to reduce the use of wood from native forests, for example, by providing fuel-efficient stoves at a subsidized cost. These are not only more efficient, reducing the use of firewood, but also have direct health benefits by reducing the amount of smoke produced when cooking.

We work with beekeepers in communities surrounding the National Park who want to use modern techniques that can lead to higher yields and a better quality product, boosting incomes and benefitting the ecosystem. Our support includes:

We manage all donor funding and support the Bale Mountain National Park with financial management and standard operating procedures. We have also been instrumental in supporting the application for World Heritage Status for the Park.

In order to protect the habitat that supports a wide variety of species, FZS collaborates with EWCA and other community groups to support law enforcement, provide training, establish integrated fire management and support outreach activities with park-adjacent communities.

The current General Management Plan guides actions and activities in the park and was developed in consultation with communities and ratifies by the authorities. An Infrastructure Master Plan is being developed to guide future construction of outposts, offices, and tourism facilities. This will be developed alongside the establishment of model agreements between BMNP and tourism investors, with the support of FZS, to enable sustainable developments within the protected area, whilst preventing any further threats to conservation efforts being made to protect the park. FZS is working with EWCA and BMNP management to develop a strong Environmental and Social Management Framework to guide these developments.

FZS have been partnering with Oromia Forest and Wildlife Enterprise in promoting community participation and benefit sharing from trophy hunting in Bale Mountains.

Our partnership has resulted in creation of Collaborative control hunting area scheme, with 60% of the revenue going to community organizations. 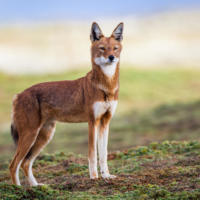 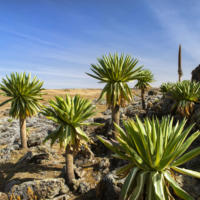 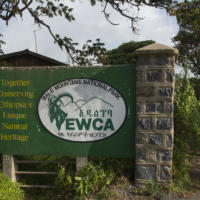 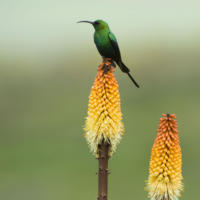 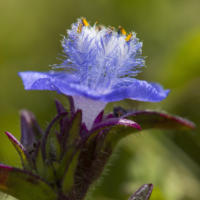 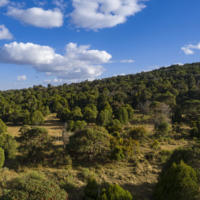 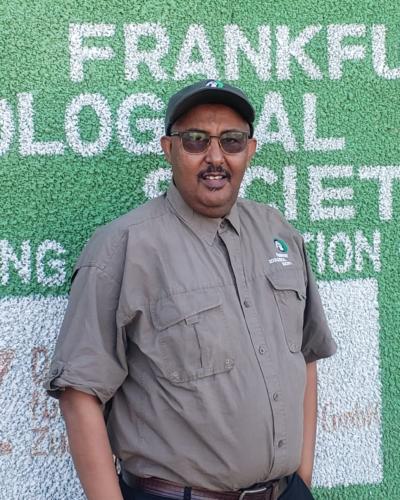