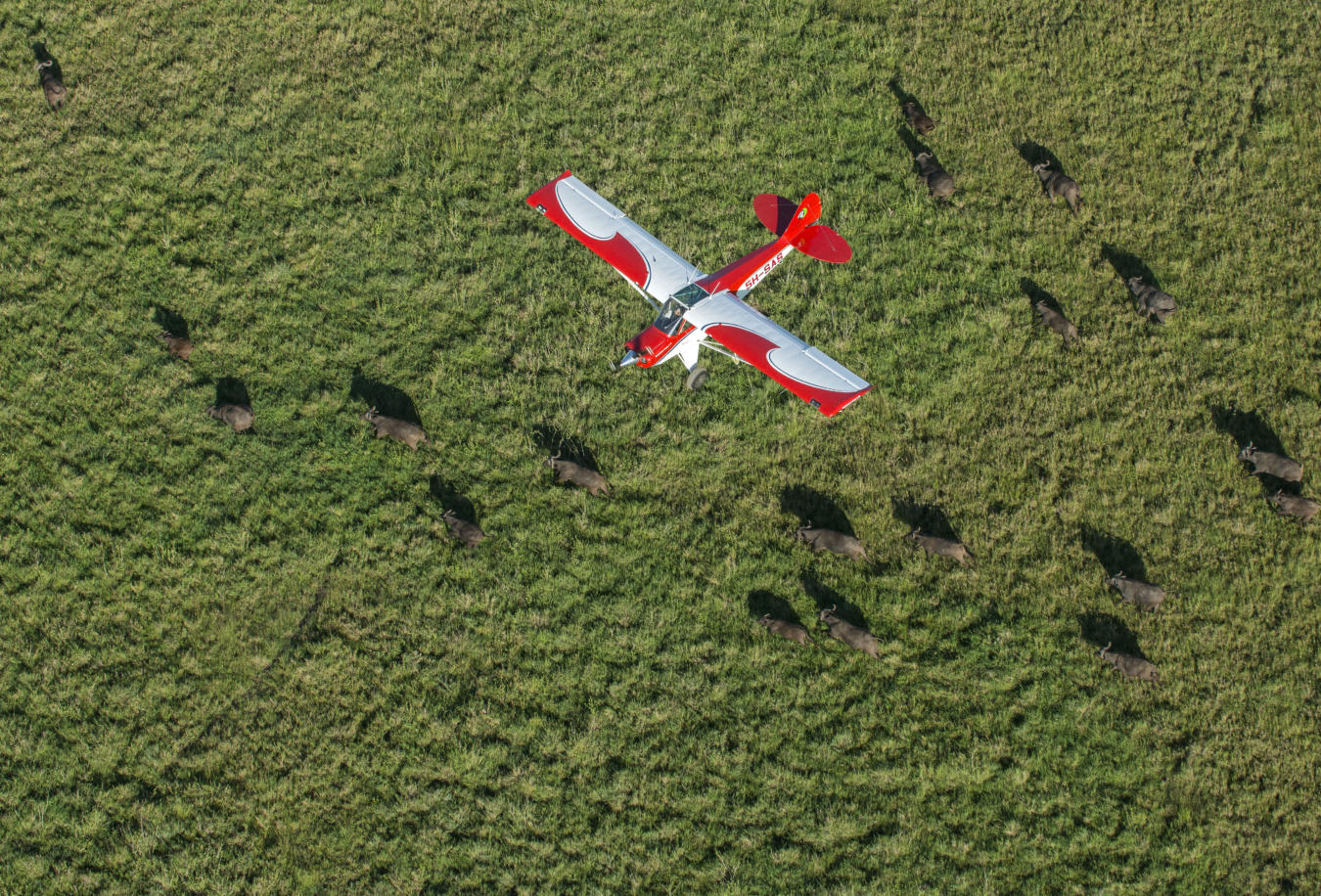 Why we use airplanes

Aircraft are essential for surveillance of the Serengeti ecosystem. They are used for monitoring, aerial patrols, and wildlife censuses.

The Serengeti National Park covers about 15,000 square kilometers. Regular low-flying aerial patrols are necessary to observe the full expanse of the park including the park borders. The aircraft also allows for quick responses. In case security threats or poaching incidents are observed, they are reported back to Serengeti National Park authorities. Staff on the ground can then respond accordingly.

In 1964, the Frankfurt Zoological Society supplied the first aircraft to TANAPA, a Cessna. Since then, we made sure that the Serengeti Park management has always been equipped with airplanes. Today, aerial support for the Serengeti includes an Aviat Husky as a dedicated spotter plane that can operate at low heights and slow speeds, providing patrols and reports to the Park authorities. The second aircraft, a Cessna 172, provides logistical support.

Counting animals in the Serengeti

For animal surveys, aircraft follow a regular flying pattern of parallel straight lines, called transects. The survey crews usually consist of four individuals: the pilot who navigates the aircraft following the survey map, a front seat observer who records metadata including the beginning and endpoints of each transect, as well as height, vegetation, water, and areas that show fire damage. The two rear-seat observers, who look out the left and right rear windows, perform the actual counting. They count all the animals they can see within a sample area. This area is defined by streamers attached to the wing strut on each side of the aircraft. On the ground, the sample area is about 150 meters wide. The rear seat observers record their observations on a voice recorder. To accurately count larger groups of more than ten animals, photos are taken and then later used to estimate population numbers.

Constant height and speed are essential for data consistency. Survey teams can use one or more aircraft, each flying at a height of around 100 meters above ground and at a speed of around 175 kilometers per hour.

A range of larger animals can be counted in this way: from wildebeest and other antelopes to elephants, giraffes, hippos, baboons, crocodiles, and even smaller animals such as warthogs. The teams usually also record human activities that they see including the number of settlements or livestock grazing.

The Serengeti shall not die

In the late 1950s, Bernhard and Michael Grzimek set out from Germany to count wildebeest in the Serengeti, and to document the extent of the Great Migration for the first time. Their quest is well documented in the academy award-winning film ‘Serengeti shall not die’ (1959).

For Bernhard Grzimek, former director of the Frankfurt Zoological Society, the triumph of making the film made the Serengeti and its threats world-famous overnight. Sadly, this success came after the tragic death of Bernhard’s son, Michael, who at 24 years of age died when the Grzimeks’ famous zebra-striped Dornier aircraft collided with a vulture while flying over the Serengeti, causing the plane to crash.