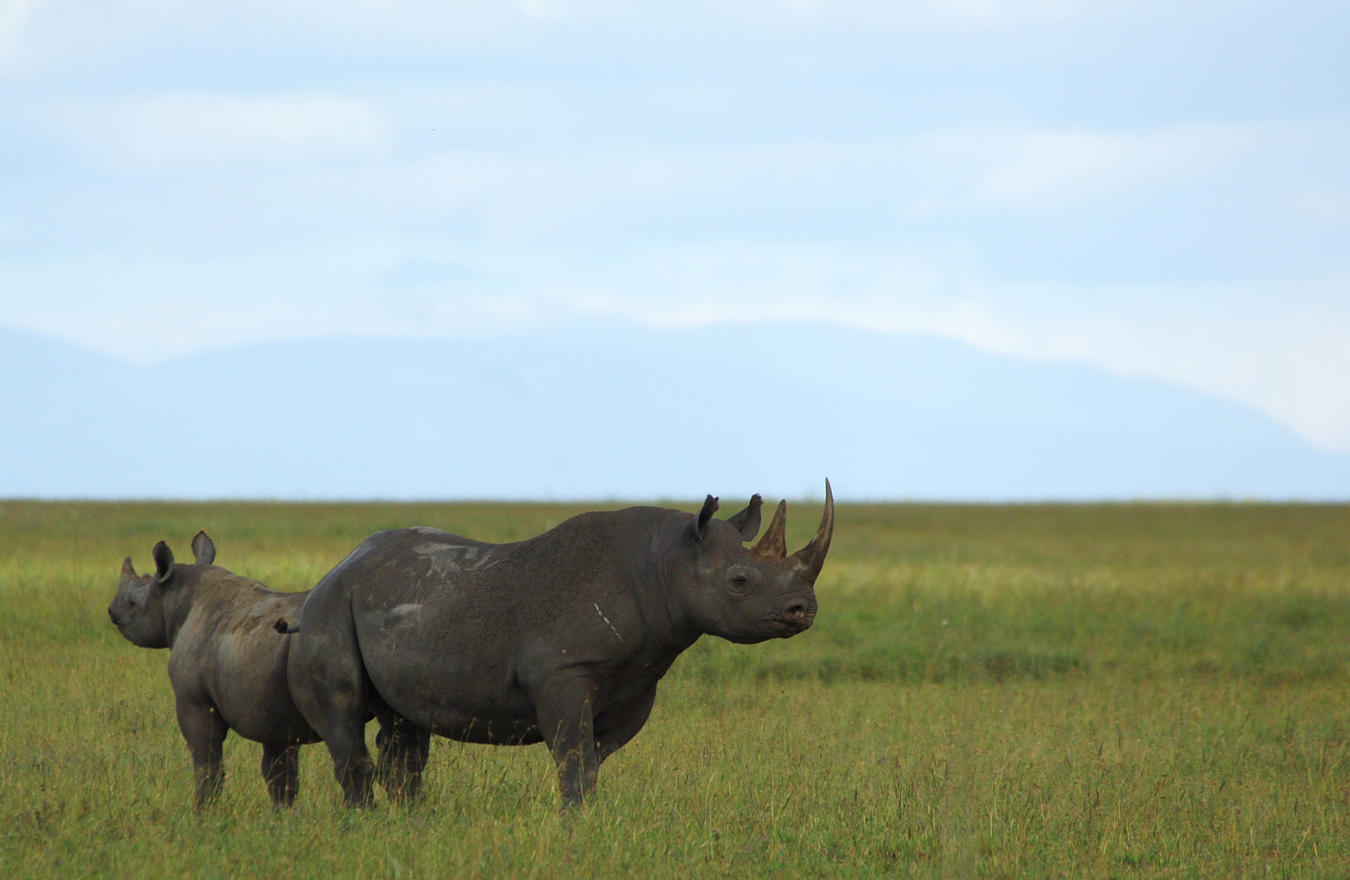 A brighter future for black rhinos

Mama Serengeti is a critically endangered eastern black rhinoceros who lives within Serengeti National Park. Her sub-species was nearly wiped out between the 70’s and 90’s but now the population is growing, thanks to work conducted by the Tanzania National Park Authority and FZS.

After a long morning of browsing for food, Mama Serengeti and her calf move slowly towards the river. The sun is high up in the sky, and the two rhinos are thirsty. As they reach the riverbank, they drink water then roll and play in the mud. The mud helps to keep off pests and parasites and cools them down; this protects them against the heat of the scorching sun.

Mama Serengeti was one of only three rhinos found in 1995 in the Moru Kopjes in the Southern part of the Serengeti National Park. “Mama Serengeti is like the pride of the Serengeti,” says Malale Mwita, who is in charge of rhino monitoring in Moru, Serengeti. True to her name, “she has since then given birth to more than 10 calves, and right now her youngest is about 7 months old”.

Mama Serengeti is an Eastern Black Rhino, a sub-species of black rhino that is considered critically endangered by the IUCN Red List of Threatened Species. Between the 1970s and the early 1990s, this sub-species was reduced by more than 95% due to poaching. A tragic loss for the Serengeti ecosystem.

Aside from being iconic animals that can act as ambassadors for the threats the Serengeti is facing, they are an important part of their ecosystem as well. As large herbivores, they shape the landscape they live in by eating leaves, branches, twigs, and barks of bushes and trees which maintains a savannah ecosystem. If the rhinos are gone, forests start growing and the landscape changes. 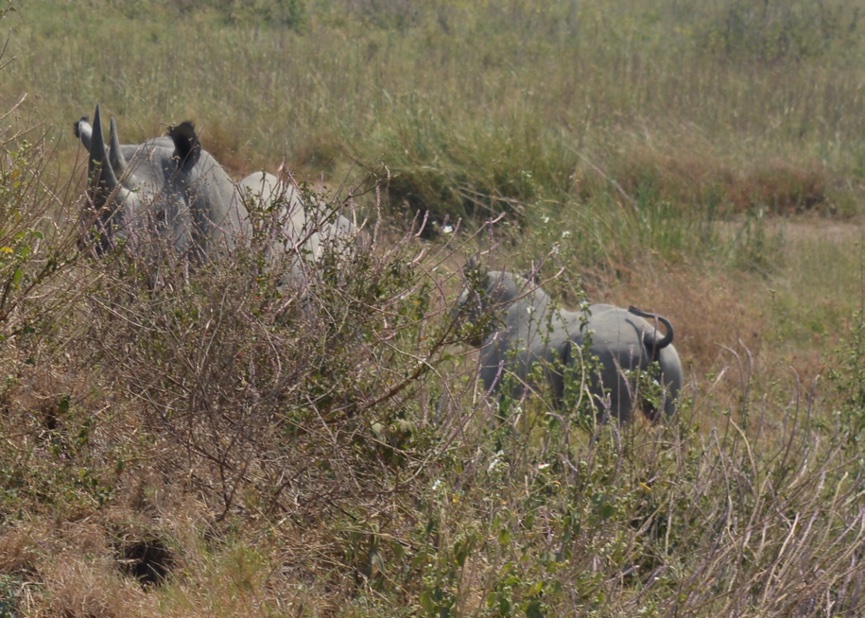 Mama Serengeti and one of her young. © Samira Haji

In the early 1990s, the Government of the United Republic of Tanzania and with support from the Frankfurt Zoological Society (FZS), launched the Rhino Conservation Project.

“FZS has assisted and continues to assist in the conservation of this precious species by purchasing rhino monitoring equipment and by training Tanzania National Park Authority (TANAPA) patrol rangers,” says Rian Labuschagne, FZS Project Leader of the Serengeti Conservation Project. Rian was involved in the early days of the Rhino Conservation Project in Ngorongoro in the 1990s, along with Malale Mwita.

Apart from ground patrols, the rhinos are also being monitored from the air: “Aerial surveillance has been and continues to be a key form of patrolling and monitoring of rhinos,” explains Rian. FZS supported aircraft are used to keep an eye on the rhinos and to search for signs of any illegal activities or carcasses (elephant or rhino), which could indicate a poaching incident. 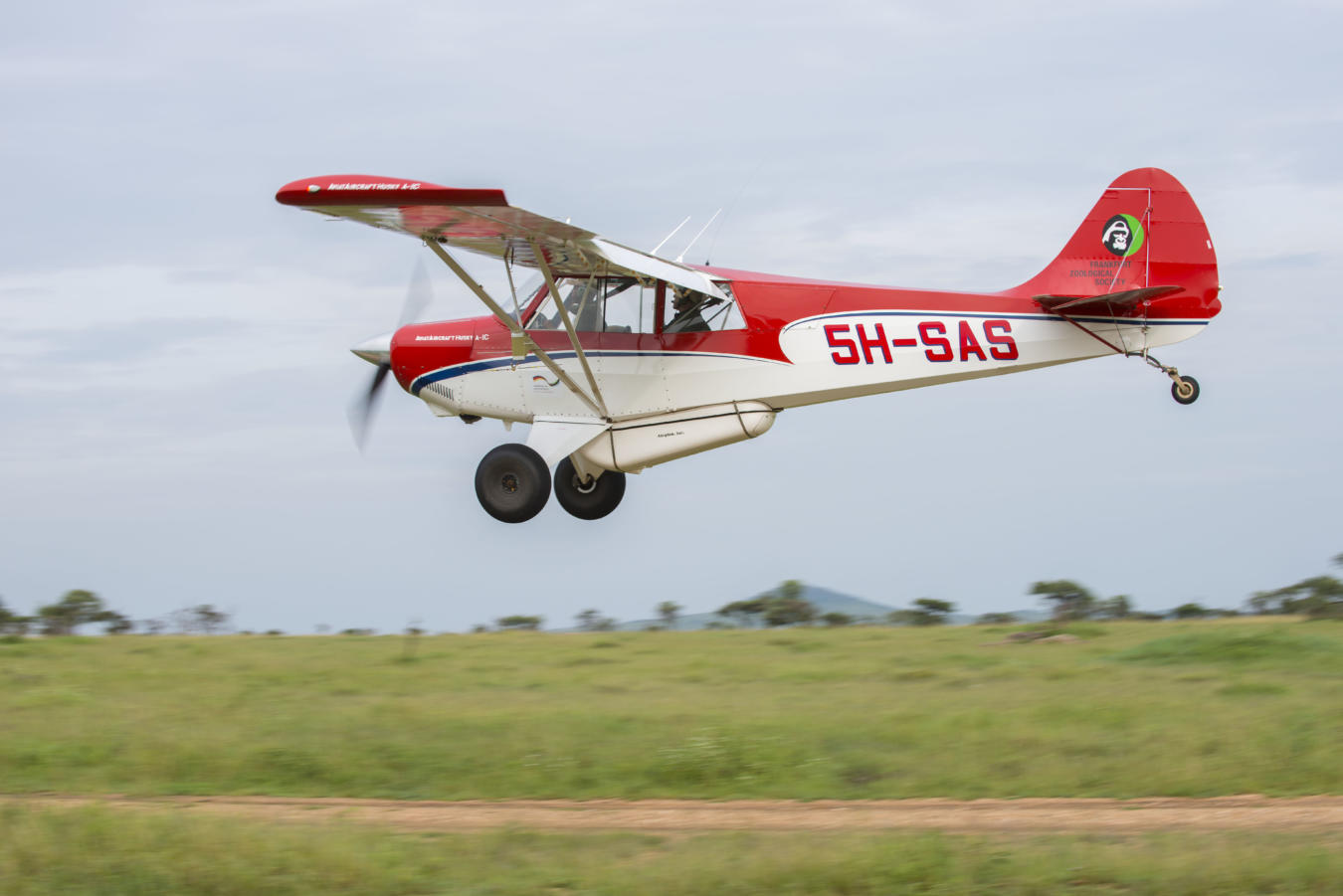 The FZS Husky plane landing after several hours of aerial surveillance in the Serengeti. © Daniel Rosengren

The Eastern black rhino population in the Serengeti and Ngorongoro is slowly growing. For decades, TANAPA and FZS have effectively protected the animals in their original home. Some individuals of the subspecies have also been reintroduced from South Africa. This effort has paid off, the Serengeti and Ngorongoro are among the few places on the planet where there is a wild population of black rhinos.

Despite conservation efforts, Mama Serengeti, her little one and their fellow black rhinos still face persistent threats from poaching. That’s why the work goes on. To combat poaching and wildlife trafficking, organizations, authorities and local people must work together. With modern programs for environmental education, participation, and empowerment of local people, awareness of the importance of protecting rhinos is growing.

Learn more about our work in the Serengeti